There was a caller to the Bills Postgame Show this past Sunday on WGR who said Buffalo's complete destruction of the New York Jets was a statement game.

Let's be honest, it was far from that.

Blowing out one of the worst teams in the National Football League is exactly what the best teams in the league are supposed to do. This was more like one of those "get your offense right before going into the toughest stretch of your schedule” game.

Following the shocking 9-6 loss to the Jacksonville Jaguars, we spent the entire week discussing the Bills' offense and all the different problems they were having.

The Bills remedied every issue that was on the list against the Jets this past week.

Daboll was back to being a good coordinator. He put together a very good game plan, used a variety of personnel groupings and formations and got players involved who hadn’t had much work through the first eight games. He also found a way to help the run game, while also maintaining the Bills' identity as a pass-first offense, which is the right thing to do.

Allen, who hadn’t looked good in six of his previous eight quarters of action, was in complete control and dissected the Jets' pass defense. He completed 75% of his passes, spread the ball around, made good decisions, aggressively attacked downfield all game long, and made sure to get the ball to his best weapon, Stefon Diggs, early and often.

Diggs had nine targets in the first half alone, which was more than he had in the previous two weeks against the Miami Dolphins (8) and Jaguars (7). The Jets had no one who could cover the Bills' star wide receiver, and Diggs ended up totaling 162 yards, which is his best day yet with the Bills. 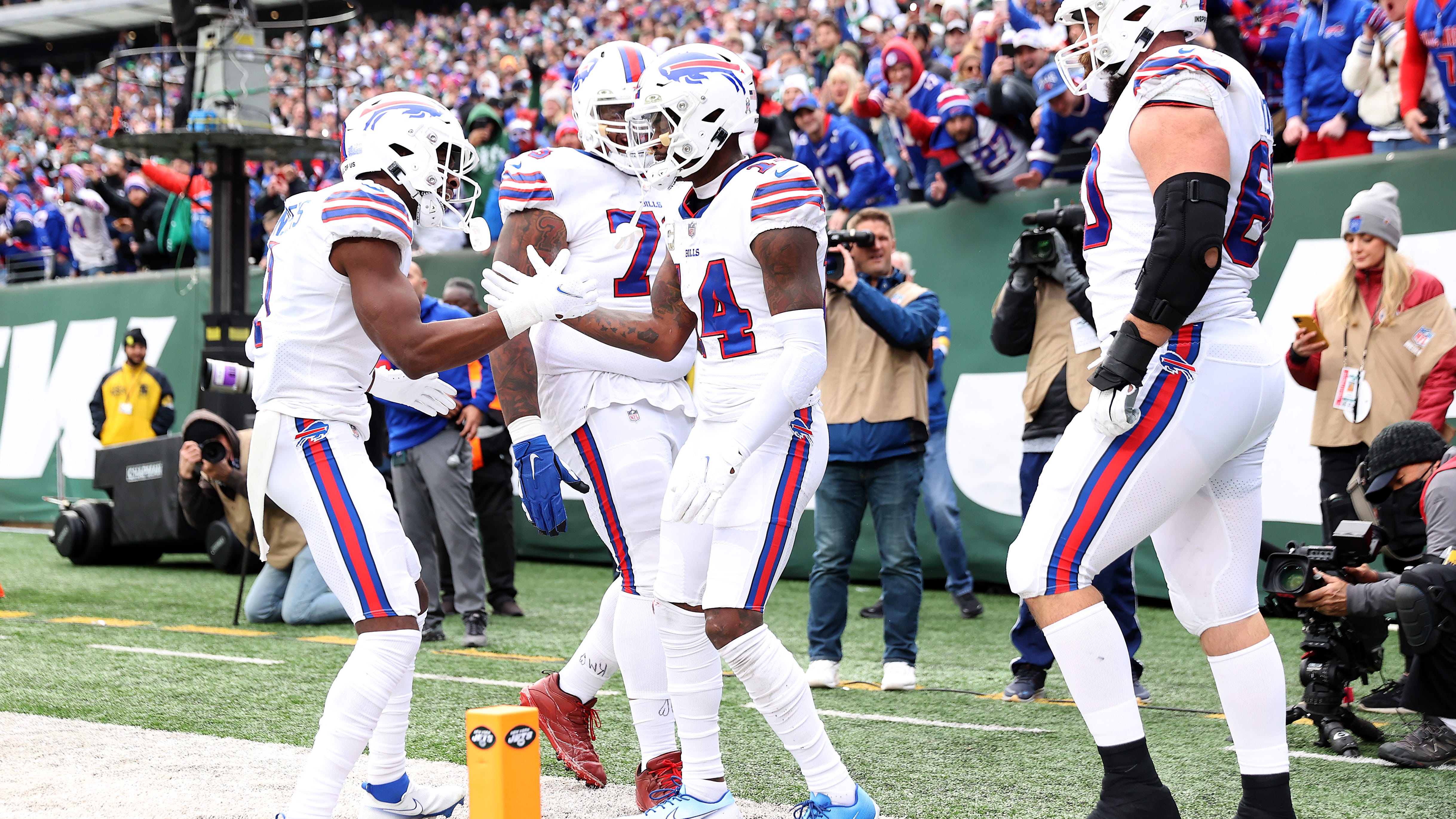 Allen was deadly when it came to explosive pass plays. The Bills had six pass plays of 20 or more yards, three of which were from Diggs (57, 23 and 43 yards) and three more came from Gabriel Davisc(49, 36 and 20 yards). Two other explosive plays were produced by Emmanuel Sanders, but both were wiped out by offsetting penalties.

Even when the Bills were up big in the second half, they continued to throw bombs with success.

Speaking of Davis, he is one of a few players that Daboll turned to in an effort to spark the offense. This game reminded us, once again, why we fell in love with Davis during an impressive 2020 rookie season. He was on the field for a season-high 52% of the snaps and showed off his ability as a deep threat, as well as his reliability with his hands and feet.

Diggs, Sanders, Cole Beasley and Dawson Knox are all ahead of Davis on the passing game food chain, but they need to find a way to get more touches for Davis. He’s that talented. 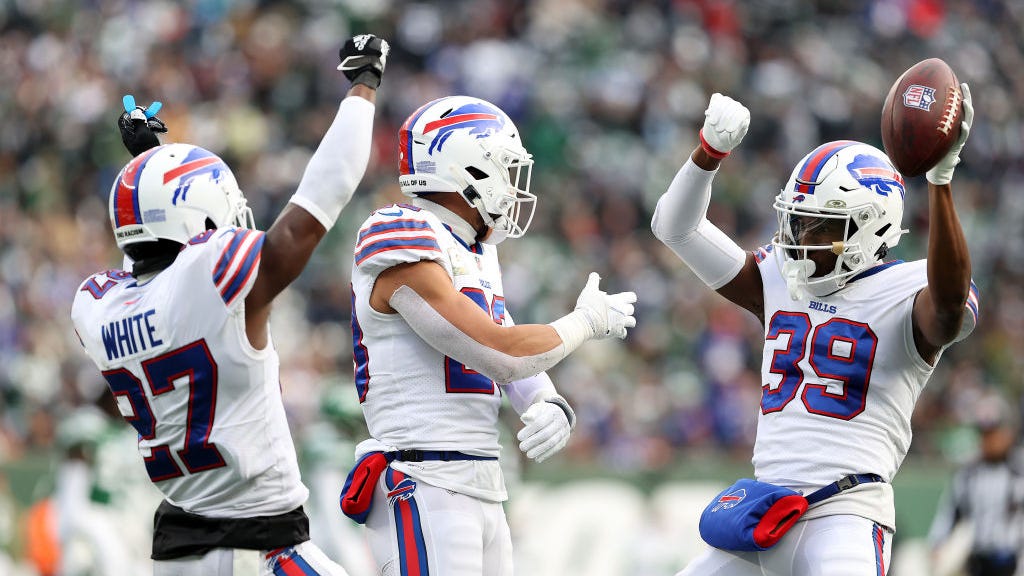 Daboll also found more touches for Isaiah McKenzie, whose speed was used to help out, what has been, an average running game.

Prior to this game, the special teams ace had just three carries on the season and has been more of a jet sweep decoy than anything else, when it comes to the offense. McKenzie had two carries in this win, and both were key plays in red zone touchdown drives. He also had a catch for a third down conversion on another drive.

In all, McKenzie had 29 yards on three touches.

Speaking of touches, the little-used Matt Breida hadn’t had any since Week 1 against the Pittsburgh Steelers.

Breida's speed to the edges was a key part of the improved showing from the ground game, but that speed in space also paid off in the passing game. The 26-year-old was on the field for just eight snaps, but they were very productive snaps. He ended up with six touches (three runs and three catches) for 50 yards and a pair of touchdowns.

I’m not sure how often the Bills will have each of the top-three backs active in the same game. They might not do it again, but like Davis and McKenzie, Daboll needs to find a way to get Breida involved a little more often.

The offensive line had a bounce-back game, and its no coincidence that it happened as Spencer Brown returned to the lineup.

The rookie tight tackle has looked good since he became a starter in the fourth game of the season. Brown has been solid at both run blocking and pass protection. His return had a trickle down effect, because it meant the Bills could move Daryl Williams from tackle back to right guard.

Williams has struggled when playing tackle, and the line is better when he is playing inside.

As for the run game, the Bills don’t need to run it more often or work to have balance on their offense. They just need to be more productive when they do run the ball.

Thankfully, Daboll didn’t listen to calls for a bevy of rushes. 11 of the first 13 plays from the Bills were passes. At halftime, Allen had thrown 21 passes and there were just six non-quarterback runs.

The balanced shifted in the second half when the Bills blew the game open, but also because the Bills had success when they did decide to run. Credit Daboll, who used the speed of Breida and McKenzie there, and even called an end-around for Sanders, which turned into a 24-yard pickup.

The Bills were really good with runs to the edges, where both linemen and skill guys sealed off Jets defenders.

The Bills finished with 20 non-quarterback runs for a total of 139 yards, which is almost seven yards per-carry.

All-in-all, it was exactly what the doctor ordered.

Now the Bills prepare to face the Indianapolis Colts, New Orleans Saints, New England Patriots (I hate to admit it, but they're good again) and the Tampa Bay Buccaneers over the next four games.