Brian Daboll has been hired to be the next head coach of the New York Giants
By Howard Simon, WGR Sports Radio 550

If you aren’t familiar with the old musical "The Music Man," you won’t get that reference. So I’ll change it to fit this article: There’s trouble in the Queen City.

After Week 6 of the 2021 NFL season, the Buffalo Bills had a 4-2 record and led the AFC East. New England was their closest competition, but the Patriots were 2-4.

Five weeks later, the Bills have fallen out of first place.

A 41-15 butt kicking at the hands of the Indianapolis Colts on Sunday did the deed, dropping the Bills to 6-4 on the season. The Patriots are currently 7-4 thanks, in large part, to a five-game win streak.

This was the worst loss of the season without a doubt.

The defeat in Jacksonville to the Jaguars two weeks ago was a shocking upset, but you could convince yourself that it was just a bad day at work. The Bills took their opponent for granted and got burned.

There’s no reason you can possibly come up with to ease your mind after what happened at Highmark Stadium on Sunday.

The Bills certainly weren’t looking past their opponent. They faced a Colts team that is playing its best football of the season after an 0-3 start, and Buffalo got absolutely destroyed in every facet. Offense, defense, special teams and coaching.

You name an area, and I’ll tell you the Colts dominated.

Let’s start with the offense.

The Bills' passing attack never got into any kind of groove. It started up front with an offensive line that continues to struggle when it doesn’t have its starting-five available.

With Spencer Brown unavailable, the Bills, once again, decided to play Daryl Williams at right tackle and Cody Ford at right guard. With Jon Feliciano still on Injured Reserve, it meant another start for Ike Boettger at left guard.

The line had lots of problems in pass protection, and it clearly affected Josh Allen, who missed on some throws and made some bad decisions on others.

Allen finished his afternoon with just 209 yards passing on 21-of-35 passing, was intercepted twice and fumbled once, as well.

The Bills, once again, showed an inability to get the ball into the hands of their best offensive playmaker, Stefon Diggs. One week after the wide receiver had nine targets in the first half, he had just four in the first 30 minutes against the Colts. Coming out of halftime with the Bills down 17 and knowing they had to throw the ball, Diggs had just one target out of 15 plays the Bills ran in the third quarter. This, despite the fact Indianapolis was playing two backup safeties due to injuries.

Diggs ended the game with six targets, four catches and just 23 yards. His longest reception went for only nine yards, but he did have a pair of touchdowns.

The Bills offense is in a month-long funk, and oddly enough it's around the same part of the schedule where it happened last season.

Through the first six games of this season, the Bills had scored more than 30 points in five games and were averaging 37 points per-game. Over the last four games, they have one 30-point game and are averaging just 23 points a game.

I’m sure it's no coincidence that it happens at a time when the offensive line isn’t at full strength.

Indianapolis had eight drives, not including their final possession when they were just running out the clock. The Colts scored five touchdowns and added a pair of field goals. I guess I should give them a little break, considering one drive started at the Bills' two-yard line and another at their own 24-yard line after turnovers.

However, the defense was dominated by the Colts' offensive line. It opened up big holes for star running back Jonathan Taylor, who torched the Bills for 185 yards on 32 carries and four touchdowns. 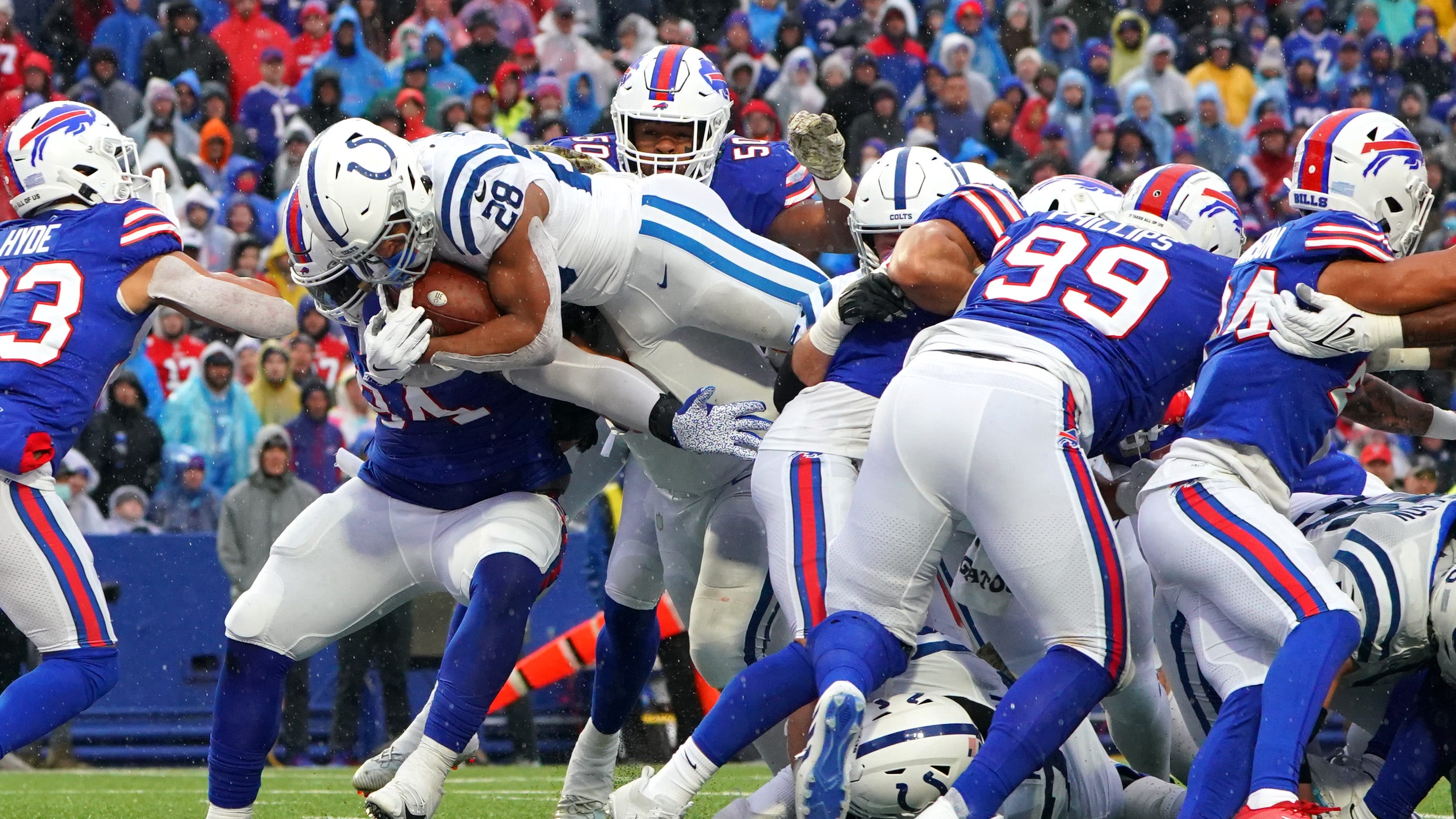 Like rest of NFL, Bills had no answer for Jonathan Taylor

This is the second time this season the Bills played one of the top rushing teams in the league - the Tennessee Titans being the other in Week 6 - and they were pushed around badly in both of those games.

The Bills forced just one punt, and even that drive went eight plays. Indianapolis converted 66% of their third downs, went 4-for-6 in the red zone, were 4-for-4 in goal-to-go and did not turn the ball over to a Bills defense that was leading the league in takeaways.

As far as special teams, Isaiah McKenzie lost his footing and fumbled away a kick return late in the first half. That was the turnover that gave the Colts the ball at the Bills' two-yard line. Instead of possibly cutting into a 17-7 deficit, the Bills found themselves down 24-7 after Taylor’s short touchdown run.

Even the reliable Tyler Bass had a bad day, although his 0-for-2 day came on field goal attempts of 57 and 49 yards on a windy and rainy afternoon.

Coaches had a forgettable day too.

Bills head coach Sean McDermott showed bad game management on a drive just before halftime, failing to call timeout after a couple of plays and costing his team some time.

McDermott decided to try the 49-yard field goal in the third quarter with his team trailing 24-7 rather than go for it on 4th-and-5 at the Colts' 31 yard line. The way the defense was playing, McDermott needed his offense to get touchdowns and not field goals.

When the Bills scored a touchdown to make it 38-15 with about 12 and a half minutes to go in the fourth quarter, McDermott did not call for an onside kick. I understand that onside kicks rarely work, but the Bills needed the ball back ASAP, and kicking it deep and trusting your defense was not the way to go. Indianapolis went on a 10-play, six-plus-minute drive and added a field goal to close the scoring.

The Bills can’t feel bad for themselves, because there’s another game on Thursday night in New Orleans against the Saints. It isn’t a truly must-win game, but the Bills badly need it since they are now looking up at New England, and, at 6-4, have to worry about teams in the wild card race too.