It would obviously benefit the San Francisco 49ers if Deebo Samuel stuck around, but George Kittle isn’t about to pry too much.

Samuel, who will be a free agent next offseason, requested a trade that the 49ers seem resistant to granting. It’s not fully clear why Samuel wants out, but apparently it goes beyond money because San Francisco seems more than happy to pay the wideout, who in Kyle Shanahan’s offense doubles as a running back.

Kittle, the Niners’ star tight end, keeps in touch with Samuel, and Friday on the “Pat McAfee Show” he shared his insight on the situation.

“I actually talked to him like two days ago," Kittle said. "He seemed like he was in a good mood, he was hanging out with his kid who he just had, he’s also a new dad. I didn’t ask about his contract, we were just talking about other things, where he’s training at and we ended up talking about sneakers for a bit because we’re both sneakerheads, so that was our entire conversation.

“But he seems like he’s in a good place. I think Deebo knows this team loves him, we’d love to have him here, and if he wants to play somewhere else then hey, it is what it is. It’s a business, so I wish him nothing but the best of luck if he goes somewhere else.”

We’re entering the quietest time on the NFL calendar, but it’s not impossible for a Samuel trade, if it’s going to happen, to come together prior to training camp. But, basically, until he’s in uniform for the 49ers on Week 1, a trade seems at least possible – even if the organization publicly is dismissing it.

And if we're to make anything of his social media activity, it seems like Samuel might -- might -- be warming up to the idea of staying put for now. 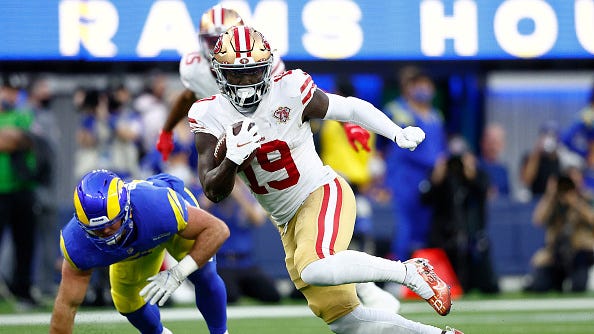 Deebo Samuel is back to following the 49ers on social media