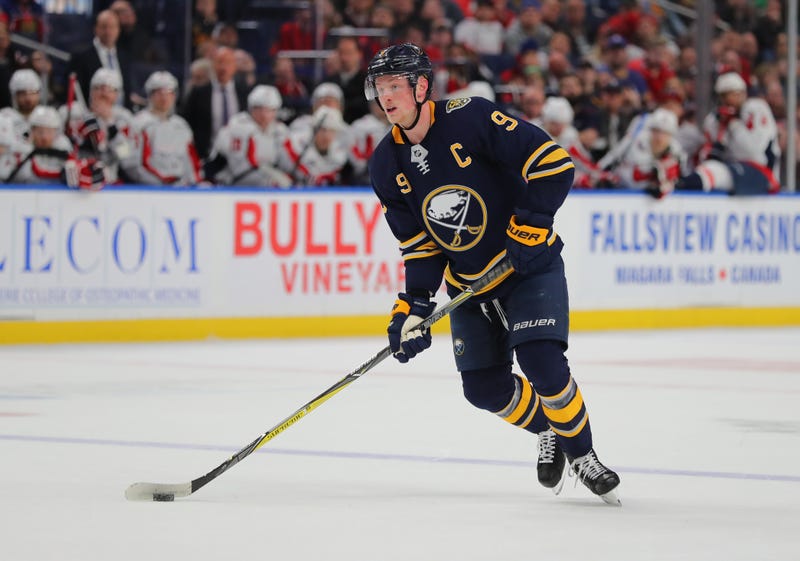 Buffalo Sabres captain Jack Eichel was not on the ice with his teammates for the first practice of training camp on Friday at KeyBank Center. The team announced that he he out day-to-day with an upper-body injury suffered while training.

Sabres forward Jack Eichel will miss today’s practice due to an upper-body injury sustained in training. He is considered day-to-day.

The 24-year-old was set to skate in the first group of players on Friday, which consisted mainly of players who are fighting for a spot on the 23-man roster or the six-man taxi squad to start the season.

It was likely that Eichel was set to slot in on the top line at Friday's session with Taylor Hall on his left wing and Victor Olofsson on the right wing. Instead, it was Casey Mittelstadt who got in the first reps on the top line, while camp invitee Riley Sheahan also rotated in.

For the first time since March, we have lines to talk about!

Eichel is coming off, arguably, his best season with the Sabres, where he scored 36 goals and registered 78 points in 68 games before the 2019-20 season was shut down due to the COVID-19 pandemic.

Meanwhile, the team also announced on Friday that goalie Linus Ullmark will not practice with the team as he goes through immigration issues

Goaltender Linus Ullmark will miss today’s practice while he is quarantining due to an immigration issue. The team expects to have him on the ice in the coming days.

Looking at how the groups are made up, it looks like the main players for the 23-man roster and taxi squad are on the ice right now. Group 2 is mainly made up of players likely bound for Rochester once their season opens on Feb. 5. #Sabres pic.twitter.com/HPSPcOBKeN

news
Top 10 most popular baby names for 2020
music
The cast of 'The Walking Dead' ranked by net worth
news
See where all the Trump family members are now
music
'Full House' stars Candace Cameron Bure, 45, and John Stamos, 57, bond over 'anti-aging potion'
news
What is the post-viral condition known as long COVID?
music
Bindi Irwin, Katy Perry and other new celeb moms celebrating their 1st Mother’s Day in 2021