No matter how many goals you score in a game, it's tough to win anything in the NHL when you give up 20 goals over a three-game span.

While the Sabres weren't able to put four goals on the board like in their previous two games, it still would not have been enough to topple the Carolina Hurricanes.

The Sabres couldn't muster much offense, but they, once again, had a problem with allowing their opponent to score in bunches. Buffalo's new goalie it picked up did not fix the problem that has been plaguing the team for quite some time now this season.

Sabres newcomer Malcolm Subban allowed a goal on Carolina's first shot of the night, and things didn't really get any better from there for the former first round pick of the Boston Bruins.

Buffalo ended up outshooting the Hurricanes in this one, and Carolina peppered just 29 shots for the game. Subban faced 25 of those Hurricanes shots, saving only 19 of them before exiting the game with an injury. Aaron Dell then entered the game for the final 10:03 of the third period.

Henri Jokiharju netted his first goal of the season at the end of the first period to halve the Hurricanes' lead, but three quick goals in the second period propelled Carolina to a 5-1 lead before Zemgus Girgensons was able to answer on the power play.

The Hurricanes capped things off with their sixth goal of the night coming just over a minute into the third period.

Let's take a look at our three observations from Saturday night's contest at PNC Arena: 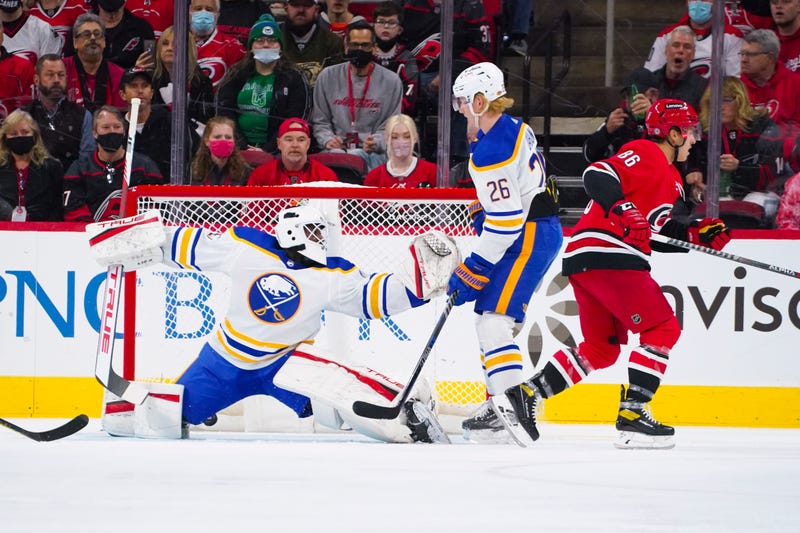 Subban was enthusiastic for his first start with the Sabres, according to head coach Don Granato prior to the game. Enthusiasm can only take you so far, though.

Subban had a rough performance against the Hurricanes, allowing six goals on 25 shots. Quite a few were goals where Subban didn't really have a chance on either a second chance rebound or a wraparound, where the team was nowhere near the puck.

At the same time, the Sabres are in desperate need of any goaltender to make some difficult saves when they are asked. The Sabres gave up practically nothing in the hopes that Subban could provide some... any form of hope in net.

It's been one game, but things seem to be back to the drawing board on that. 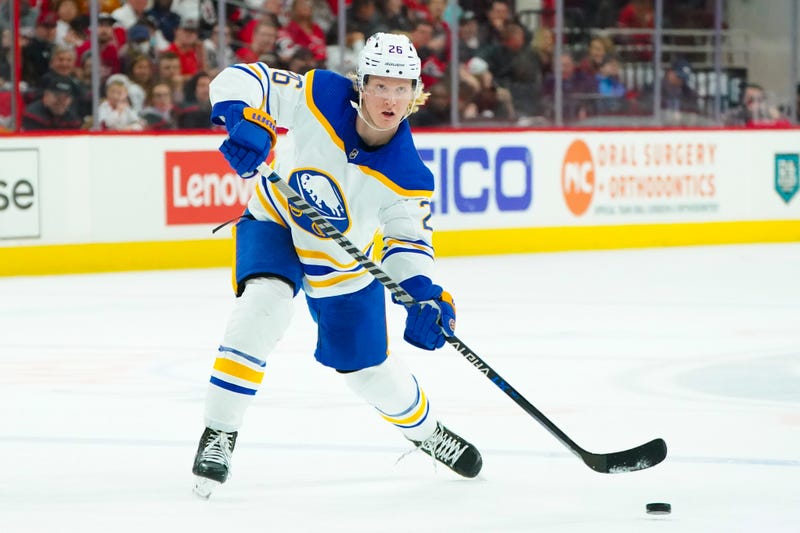 2.) Rasmus Dahlin makes another huge gaffe leading to a goal

At some point, Granato is going to need to stop the bleeding when it comes to fourth-year defenseman Rasmus Dahlin.

With the Sabres on a major power play to start the third period, Dahlin attempted to retrieve a pass to the point and whiffed on it. This allowed Sebastian Aho to steal the puck and streak shorthanded into the Sabres' zone. Subban made a big save on the breakaway, but the puck squirted back out to Nino Niederreiter, who buried it to extend the Carolina lead to four.

Besides defensive gaffes like that, Dahlin, in general, isn't even one of Buffalo's most effective players on the power play.

In terms of expected goal share, Jacob Bryson and Colin Miller have shown they are an optimal pair to have on the back end when on the man advantage, with expected goals-for percentages over 90% when they are on the ice.

Dahlin, meanwhile, sports a 68.57% expected goals-for percentage when he's on the ice for the power play, a significantly large amount considering Buffalo has an extra skater on the ice.

Something has to give with the former 2018 first overall pick. 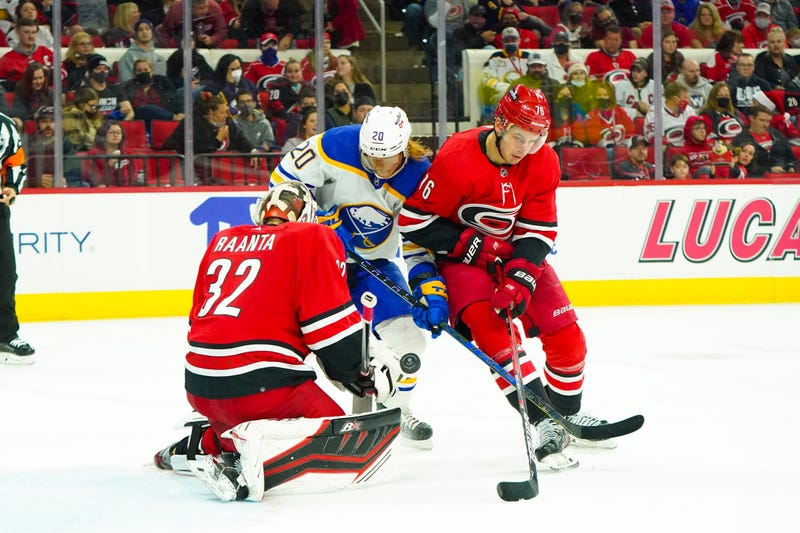 3.) Sabres struggle to muster offense in relatively even game in regards to chances

The score lines the Sabres have given up over the past few games, at least, had them scoring a bunch of goals, but the Sabres could only muster two on Saturday.

While the Hurricanes stretched their lead to 6-2, it should be noted that, at least, in this game, the Sabres may not have deserved such a large margin of defeat. They ended up controlling the expected goal share.

The Sabres now head home for a few days of rest before they get the privilege of taking on the Anaheim Ducks at KeyBank Center.

Sabres pregame coverage on WGR starts at 6:30 p.m. EST with Mike Schopp and the Bulldog. Faceoff is set for 7:30 p.m. EST on the radio home of the Sabres - WGR Sports Radio 550. 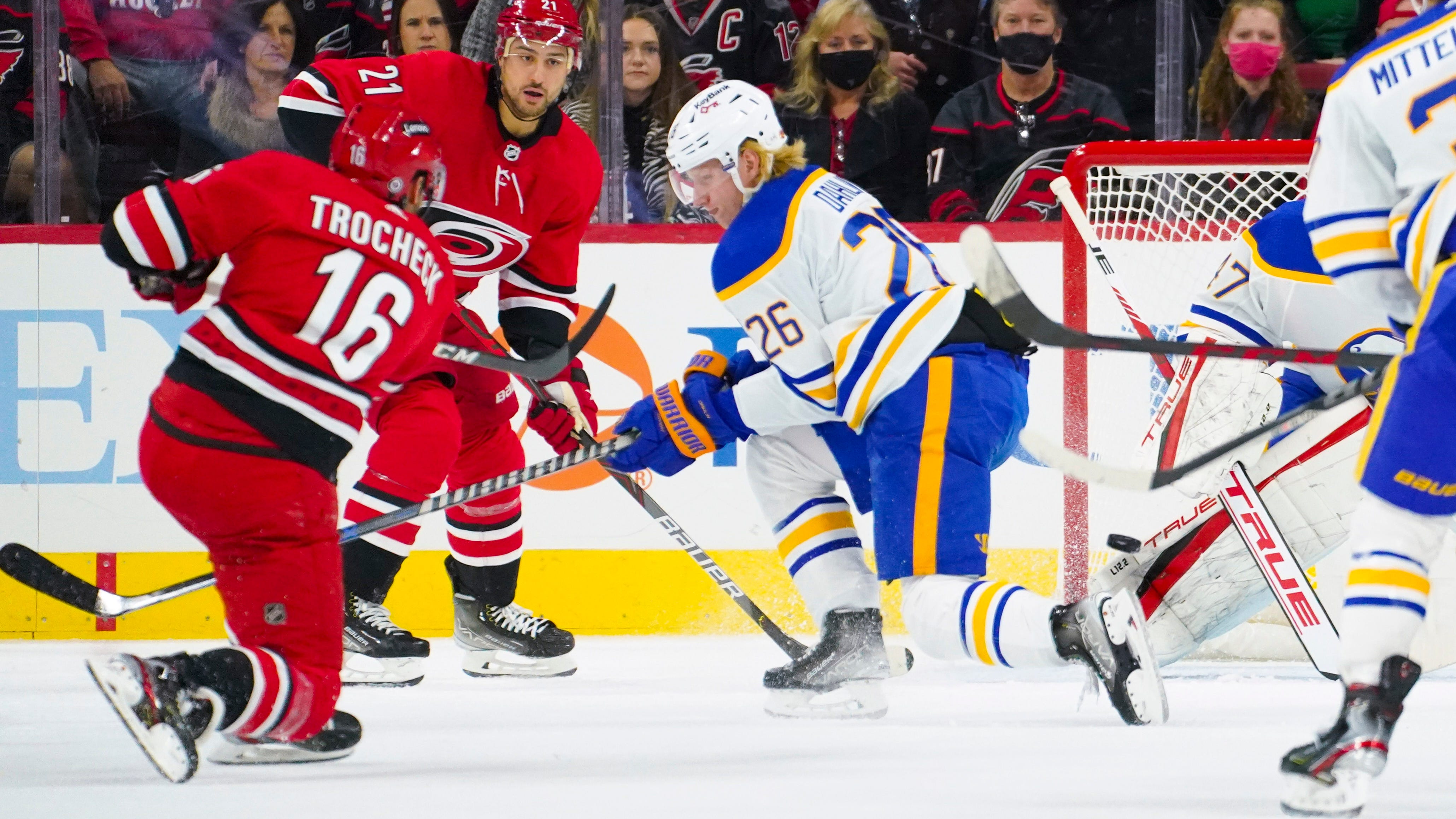