The Bills come back from down 20-3 and pull off a late 23-20 win over the Ravens in Baltimore.
By Paul Hamilton, WGR Sports Radio 550

Buffalo, N.Y. (WGR 550) – When Michael Peca was captain of the Buffalo Sabres, you could tell he had a great knowledge of the game of hockey.

Rochester Americans head coach Seth Appert, along with his coaching staff of Peca and Mike Weber, have really done a good job of developing some of the young players. Some of the guys that have made huge strides under their tutelage include forwards Jack Quinn, JJ Peterka, Brett Murray, Arttu Ruotsalainen and Lukas Rousek, defensemen Mattias Samuelsson and Casey Fitzgerald, as well as goalie Ukko-Pekka Luukkonen.

Peca has stayed close to Quinn and Peterka, and he says he's loved every moment.

"Jack had that experience in Rochester the year before, so he was a little bit more understanding to some of the stuff being taught and was expected, but JJ took awhile," said Peca during Sabres Development Camp. "JJ, I think, only had three goals through his first 20-25 games (four goals in 23 games, but then scored 24 goals in 47 games), then he started to understand some of the things that we were trying to teach him and next thing you know, he ended up with [three] hat-tricks. He’s an impressive young man, and I still view him as a unicorn, because I can’t find anybody that I’ve ever played with or against that resembles the type of player that he can become. I’m excited to see both of them play next year.

"The scary part is he has no idea as to how good he can be, which is scary. It’s the blend of the power and speed and the skill set with his hands and his shot, and his ability to play a physical game. He can dominate in any environment."

The one-on-one time Peca spent with Peterka was geared towards one major thing: Having him understand how much he can impact a game without getting on the score sheet.

"He’s incredibly fast and powerful, instinctual. He became one of our best penalty killers by the end of the season," Peca said. "At the start of the season, we never expected him ever to be able to kill penalties. That’s how far he grew."

Peca spoke last week during development camp, and I wanted to write about many of the guys he's worked with.

Rousek missed most of last season following offseason knee surgery, but did play 19 regular season games and 10 playoff games for Rochester. Despite not playing a lot in the playoffs, the 2019 sixth-round pick showed a real flair for the offense, putting up two goals and four assists for six points. Many of those points happened to come in key situations.

“He came from a full ACL reconstruction, and usually it takes you a year to get back to 100%. I think it’s a testament to how hard he wanted to comeback and prove himself," Peca said.

“We had no idea what we were getting, so we prepped him with video and then when he stepped in, he made guys' jaws drop on a daily basis with his passing ability and his vision and in the playoffs. He earned some power play time and some special opportunities.”

All three 2022 first-round picks were at Sabres Development Camp, but a shoulder injury kept Matt Savoie off the ice. As for Noah Ostlund and Jiri Kulich, they showed why they were picked 16th and 28th overall, respectively.

“Those two were incredibly impressive with their ability to move around the ice, and their strength on the puck is incredible," Peca said. "Kulich just edged JJ out in the amount of 'oohs and ahhs' he got with his scoring ability.”

Kulich said at the draft that he expects to play in the NHL this season. That probably won’t happen, but Peca says he’s certainly advanced.

“The shot’s the obvious thing, but it’s his poise as an 18-year-old, and he’s incredibly mature," Peca said of the 18-year-old. "I think it was good for him to have Rousek and [Matej] Pekar around and even [Jakub] Konecny and we called them the 'Czech Mafia'. They’re tight, but we’re able to communicate with them a little bit.” 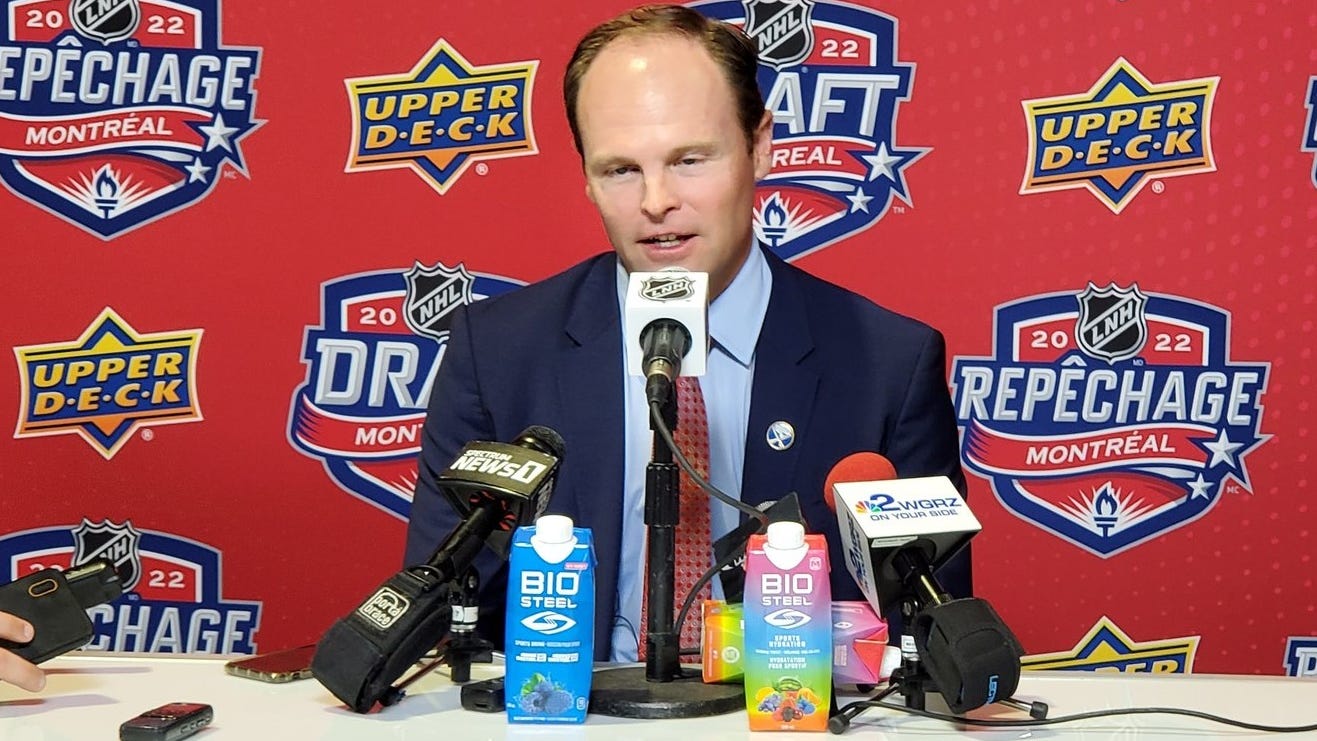 It was a very good camp for 2021 seventh-round pick Tyson Kozak. Peca says he was quite noticeable throughout camp.

“Watching him you would’ve thought he went in the first three rounds. The kid’s impressive," he said admiring the 19-year-old. "He’s quiet, he’s unassuming, but he’s a real hockey player. He does everything right on the ice. He can play 200 feet. The development guys, when they came into Rochester, the first guy they talked about was Kozak."

Last season with the Portland Winterhawks of the Western Hockey League, Kozak had 32 goals and 37 assists for 69 points in 66 games.

Arttu Ruotsalainen did not play well in Buffalo this past season, scoring just two goals and two assists for four points in 18 games. He was floundering and went down to Rochester, where it didn’t get any better. He didn’t score in his first seven games, but after that - including the playoffs - Ruotsalainen had 26 goals and 35 assists for 61 points in 60 games. His eight goals in the playoffs were fifth overall, and one goal out of second overall playing eight fewer games.

When it came to Ruotsalainen's rebound in Rochester, Peca believes he just needed to get his head straight.

“I think part of it was frustration. He wanted to be in Buffalo, and I think it just took him some time to realize that he’s a good hockey player," Peca said. "The one thing he got from our environment is he re-discovered his love for the game, because coming to the rink every day, all of a sudden he started to smile on a regular basis. In his exit interview, it was an amazing comment. He simply said every time he touched the puck, he thought he could do anything.”

Aaron Huglen was a freshman at the Universoty of Minnesota this season and just got better and better as the year went on. He scored a couple of big goals in the NCAA Tournament, and Peca noticed the 2019 fourth-round pick last week.

“I had no idea who he was coming into this camp, and when I saw him on Day 1, his skill set and his habits on the ice, I would’ve thought he was 27-years-old," Peca said of the 21-year-old. "He’s the kind of guy that if you’re on his team, you want to play with him, because he’s just a solid hockey player. He doesn’t make mistakes, he gets pucks back, he knows where to put pucks, he works hard. It’s exciting to get to see kids that you don’t know who they are. You look at him, you’d think he played in the NHL already, because his game is so poised and so complete.”

As Peca’s kids were growing up, he didn’t want to get into coaching. But now that he’s into it, he sure seems to be enjoying it.