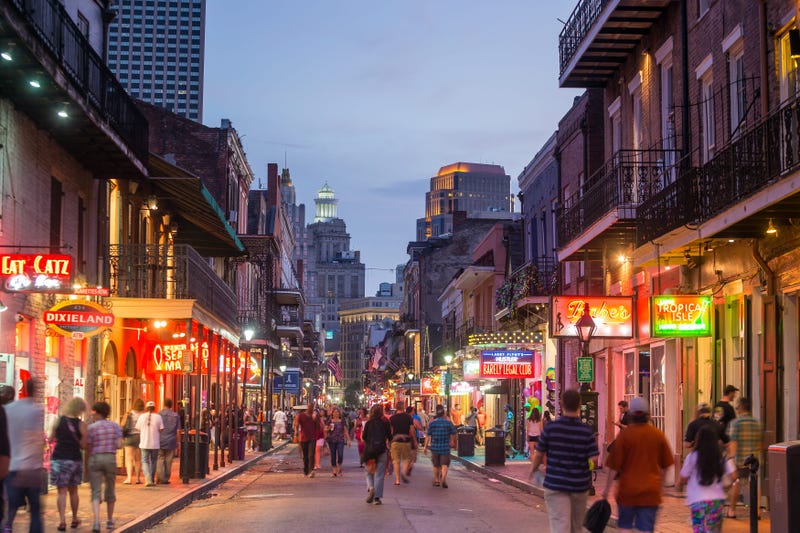 The French Quarter Management District had a study done to look at new strategies to improve public safety in the Vieux Carre, the crown jewel of Louisiana’s tourism industry and New Orleans’ most treasured neighborhood. To discuss the study’s results, Newell invited Karley Frankic, Executive Director of the French Quarter Management District, and Board Chair Christian Pendleton on the program Tuesday morning.

“Other than the obvious challenges to public safety that we already know about, what was the driving impetus for you to do this new study?” Newell began.

“It really started as the brainchild of Matthew Emory, the Mayor’s appointee for the FQMD. The idea was to get a third-party evaluation done for the safety and security of the French Quarter,” Pendleton said.

“What’s interesting is that we had so many different law enforcement entities here supplementing the NOPD’s 8th district station,” Frankic said. “There was a need to identify how to make that more effective. There’s a lot of details that work here - the 8th district currently has 108 officers. There was an opportunity here to get all of the stakeholders into the room, and what we found was that with the hospitality industry and our residents, we were really more on the same page than not. This is really important to get everyone together to talk about security in the French Quarter.”“So you ended up hiring this third-party evaluator, tell us about them,” Newell continued.

“Interfor is a global investigative and security consulting firm that focuses on domestic and foreign intelligence services, and they’re really an expert in this field,” Frankic said. “They came down and interviewed over six dozen French Quarter stakeholders and law enforcement officers over about nine months. The goal was to provide actionable recommendations that we could walk away with and start implementing here, both in the long term and short term.”Pendleton added, “That whole company has extensive law enforcement background, to include one of the owners, who is a former NOPD officer. It wasn’t a group of academics doing this study, it was law enforcement officers speaking to law enforcement officers as well as the other stakeholders. It was a very educated, boots-on-the-ground perspective, not just an academic exercise.”

“You’re about to release an executive summary that distills that initial report that contains about 50 pages of findings and analyses that were done as a result of these interviews and physical assessments… was there anything that rose to the forefront that you found surprising?” Newell asked.