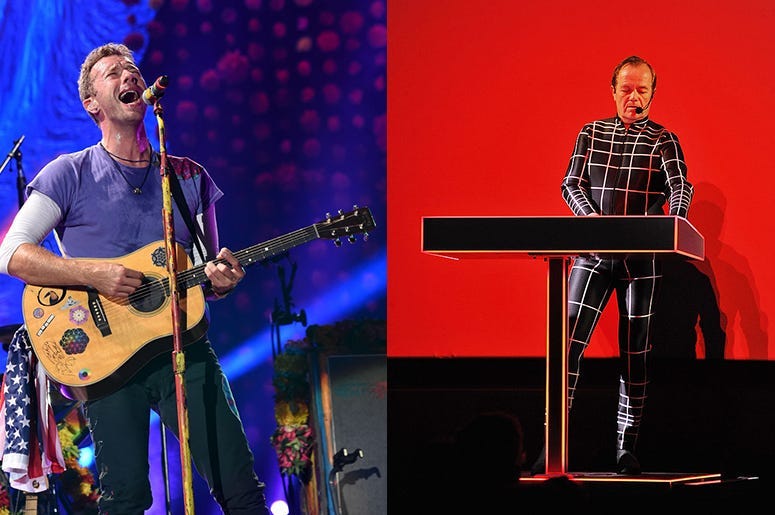 September 19, 2019 09/19/2019 6:36 pm
Coldplay's 2005 album X&Y features several songs that will end up on their greatest hits album. From the upbeat "Speed of Sound" to the dramatic ballad "Fix You", the record was highly praised and continued to propel Coldplay towards worldwide stardom.

Another track that will go down as one of the finest in Coldplay's catalog is "Talk". The song almost didn't make the record after the band encountered tremendous difficulty recording it. Chris Martin told NME in a 2005 interview,

"What happened with the song ‘Talk’ is that it was all going great and then someone said ‘That should be the first single’ and we all just freaked out and scrapped it all. I hate choosing singles, it’s so hard. We’ve just mixed it and it sounds great. I think we’ve had such pain getting to that place, I’m not sure anyone quite knows what to do with it anymore."

Coldplay made the last-minute decision to include it on the record after finally getting the mix they wanted. "When we heard it mixed properly, it sounded mega," Martin said.

It was well worth the effort as "Talk" reached #5 on Billboard's Hot Modern Rock tracks in 2005 and gave the band their first number one single in the Netherlands.

At the very beginning of the song, guitarist Jonny Buckland plays a guitar riff that becomes an instant earworm. The line gets repeated throughout the song serving as a rhythmic peak during the chorus and a beautiful accessory to Martin's vocals.

Common sense would credit Buckland for coming up with this insanely catchy riff. However, he merely acted as a musical agent interpolating a pre-existing melody.

That opening guitar riff you hear at the beginning of "Talk" has roots from one of the most influential groups of all time. Kraftwerk.

Kraftwerk's "Computer Love" served as the inspiration for Buckland's motif with the Coldplay guitarist translating Kraftwerk's synthesizer riff onto electric guitar. Under any other circumstance, Coldplay would have received immense backlash and calls of plagiarism.

However, they were granted permission to use the riff in a rare moment of approval from Kraftwerk. The German electronic music pioneers were traditionally adverse to sampling recently engaging in a lawsuit with a producer over a two-second beat sequence.

Knowing it would be difficult to secure approval, Coldplay frontman Chris Martin took a unique measure while attempting to get the sample cleared. Writing a letter to Kraftwerk frontman Ralf Hütter.

Kraftwerk was notorious for their reclusiveness going as far as not having a phone in the studio to prevent any outside noise from interfering with their recording sessions. Martin knew it would be useless to track down the band this way. Wanting to use the sample and stuck without a way to contact Kraftwerk, he had an epiphany.

"The only thing I could think of was the pen pal letters I learnt in German lessons at school. I had no idea if they knew who Coldplay were so had to explain myself like a 15 year-old school-boy," he said at the time.

Martin recalls the letter saying something along the lines of, "Dear Ralf, I sing in a band called Coldplay, blah, blah. I drew a little picture."

Depending on who you talk to from the band, Hütter's response varied. Martin indicated he received an envelope with a handwritten reply simply saying "yes," while bassist Gus Berryman reportedly said Hütter told them "Yes, you can use it, and thank you very much for asking my permission, unlike that bastard Jay-Z'."

Like so many other artists, Kraftwerk served as a monumental influence with Coldplay wanting to pay tribute to their musical heroes. While fans will argue whether or not "Talk" is one of Coldplay's best songs, it undoubtedly has one of the most fascinating origin stories of any song in their catalog.

Listen to the two songs for yourself below.