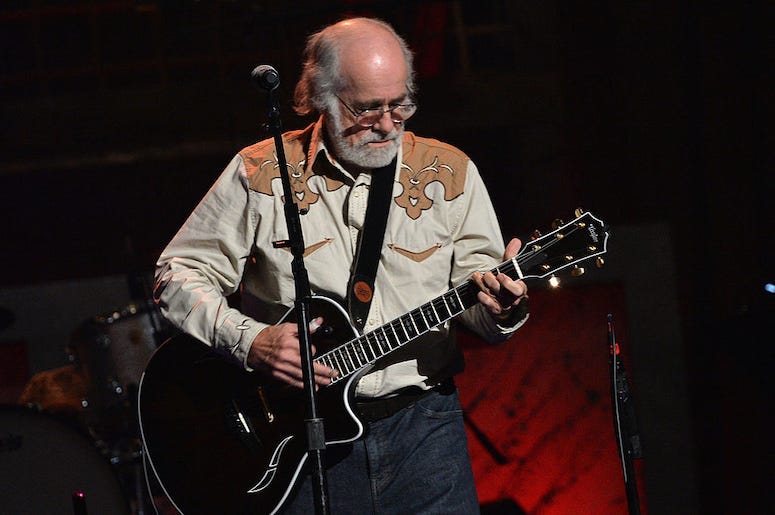 Grateful Dead lyricist Robert Hunter passed away on September 23rd at the age of 78. While Hunter may not have been a household name, you've felt his impact if you listened to any of the Grateful Dead's music.

Hunter's accomplishments range far and wide cemented by his induction into the Rock and Roll Hall of Fame as a band member of the Grateful Dead, making him the only non-performer honored in that manner.

I came to the Grateful Dead later on in life, but was instantly struck by the depth of the band's lyrics that complemented their music. It spoke on a poetic level yet told a story that had the ability to transport you to another place.

Highlighted below are some of Hunter's most well-known Grateful Dead lyrics. If you'd like to view all of the lyrics Robert Hunter contributed to the band, head over to Dead.net.

For this is all a dream we dreamed one afternoon long ago. - "Box Of Rain"
Fare you well, fare you well, I love you more than words can tell. Listen to the river sing sweet songs, to rock my soul. - "Brokedown Palace"
Trouble with you is the trouble with me. Got two good eyes but we still don't see. Come round the bend, you know it's the end. The fireman screams and the engine just gleams. - "Casey Jones"
Dark star crashes. Pouring its light into ashes. Reason tatters. The forces tear loose from the axis. Searchlight casting. For faults in the clouds of delusion. - "Dark Star"
Wake up to find out that you are the eyes of the world. But the heart has its beaches, its homeland and thoughts of its own. Wake now discover that you are the song that the morning brings. But the heart has its seasons, its evenings and songs of its own. - "Eyes Of The World"
May the four winds blow you safely home. - "Franklin's Tower"
Set out running but I take my time, a friend of the devil is a friend of mine. If I get home before daylight I just might get some sleep, tonight. - "Friend of the Devil"
Rat in a drain ditch, caught on a limb. You know better, but I know him. Like I told you, like I said. Steal your face right off your head. - "He's Gone"
There is a road, no simple highway. Between the dawn and the dark of night. And if you go, no one may follow. That path is for your steps alone. - "Ripple"
Once in a while you get shown the light in the strangest of places if you look at it right. - "Scarlet Begonias"
Nothin' shakin' on shakedown street. used to be the heart of town. Don't tell me this town ain't got no heart. you just gotta poke around. - "Shakedown Street"
I will get by. I will survive. - "Touch Of Grey"
Sometimes the lights all shining on me. Other times I can barely see. Lately it occurs to me, what a long strange trip it's been. - "Truckin'"
Come hear Uncle John's Band, playing to the tide. Come with me or go alone. He's come to take his children home. - "Uncle John's Band"

news
Three more dead whales found in San Francisco Bay
sports
Pedro Martinez calls Angels’ treatment of Albert Pujols ‘shameful’ after release
news
Barbie upgrades to a swank party pad in brand new DreamHouse
music
Mike Epps on his U.S. Tour: 'It's time for us to get out and laugh'
sports
Bobby Valentine announces he is running for Mayor of Stamford, CT
sports
NCAA rule proposal aims to crack down on flopping