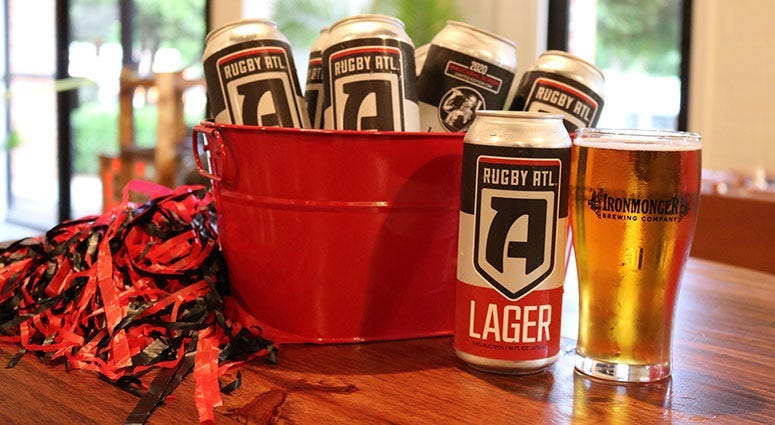 Like the word or not, there's a beer term that refers to a brew that's sometimes low-calorie and oftentimes easy to pound and super-drinkable: Crushable.

Watch a rugby match, and that term has some resonance. I remember my first match. My first impression was "organized chaos."

Once the match slowed down it's beautiful to watch. And the physical contact is totally front and center.

Crushable seems to be a crossover term from beer to rugby. And that's exactly what Ironmonger Brewing Company in Marietta thought too.

Rugby ATL is a Vienna Lager available in cans throughout the Atlanta area, in select restaurants and bars, and on draft in the Ironmonger Brewing taproom. The beer is a collaboration effort between Ironmonger and Rugby ATL, Atlanta's first-year Major League Rugby team.

Rugby ATL Lager, To Go, available now in the taproom. @rugbyatl vs Rugby United NY, 3pm Sunday at Life University, or watch with us on the big screen.
A post shared by Ironmonger Brewing Company (@ironmongerbrewing) on Feb 22, 2020 at 3:10pm PST

"We chose this particular lager, because it's easy drinking, and well-suited for tailgating and ball games of all types, and seemed fitting for the launch of Atlanta's newest professional sports team," said Val Bippert marketing director at Ironmonger Brewing. "We discussed options with our agency and with Rugby ATL, and ultimately decided on this delicious, crushable option."

Rugby ATL was involved more than just lending inspiration from their sport and style. The team was extremely involved with naming the collaboration.

A private event was held (pre-Covid-19) at the brewery for team ownership, the front office, and the founding season ticket holders prior to releasing the beer. Partygoers were given four options for can art from Anthem Branding, then they voted to pick a winner.

The finished product has been well-received. "Sales have been great so far," said Bippert. "Our distributor just placed another order for Rugby ATL Lager in cans, as well as several other of our offerings, including our new Socially Distanced and You Have Feelings?."