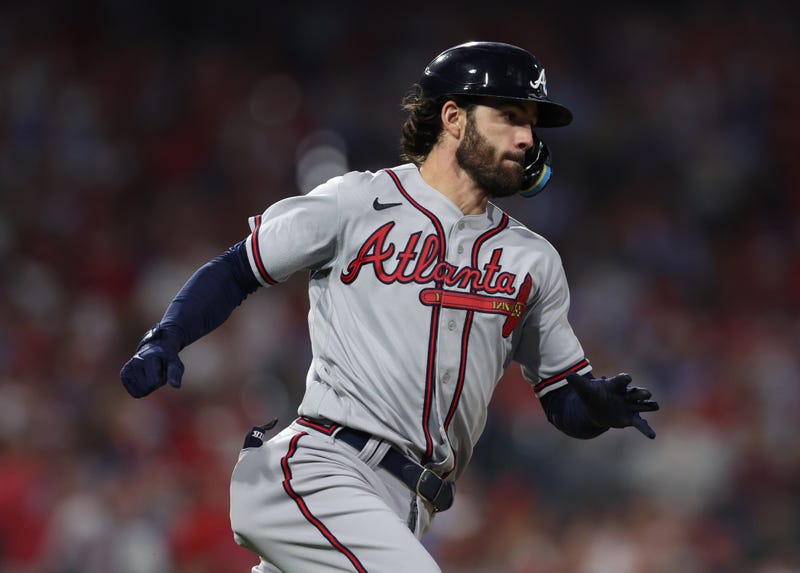 Oct 14, 2022; Philadelphia, Pennsylvania, USA; Atlanta Braves shortstop Dansby Swanson hits a double against the Philadelphia Phillies during the 6th inning in game three of the NLDS for the 2022 MLB Playoffs at Citizens Bank Park. Photo credit Bill Streicher-USA TODAY Sports
By Steven Gagliano and From The Diamond

With Major League Baseball’s offseason in full swing, Dansby Swanson is officially a free agent. While everything said publicly indicates that the Braves want the Atlanta native back and Swanson would prefer to remain with his hometown club, Braves fans were reminded last offseason that baseball is, at the end of the day, a business. So, if the Braves are unable to reach a long-term deal with Swanson, what’s plan B for Alex Anthopoulos?

Swanson is among a contingent of big-name shortstops to hit the free agent market this winter, but following a report from The Athletic’s Ken Rosenthal, it doesn’t appear that Atlanta would be in the mix to sign Carlos Correa, Xander Bogaerts or Trae Turner if the former top pick inks a deal elsewhere.

Discussing the Braves' potential alternatives on 92.9 The Game’s From the Diamond, Grant McAuley and Corey McCartney shared their belief that Atlanta could look for a trade partner to reload at shortstop.

“A trade still makes a ton of sense and I think that could be a way in which the Braves could strengthen themselves at shortstop…One name that we’re hearing a lot is Willy Adames of the Brewers. Another one that I’m seeing that’s been linked primarily to the Seattle Mariners—at least as far as the reports that have come out in the last 24 hours—and that’s Gleyber Torres. Torres is a really interesting name to me though I think he might be a better second base-fit than a shortstop, but he has played shortstop before,” McAuley said.

If it’s not a trade, Atlanta would likely look in-house for Swanson’s successor. With that in mind, Vaughn Grissom will be in New Orleans throughout the offseason working with Ron Washington as detailed by Dave O’Brien in The Athletic. Washington has high praise for Grissom and his upside as a future everyday shortstop in the league.

“He’s going to visit and go through, what is—I think—probably the best infield university that you can enroll yourself in at any level of this sport,” McAuley said.

Orlando Arcia also offers another in-house option for the Braves.

We’re still waiting on the first domino to fall in the loaded shortstop free-agent class, but fans here in Atlanta hope that Swanson will be back at the Battery holding down his spot in the infield.