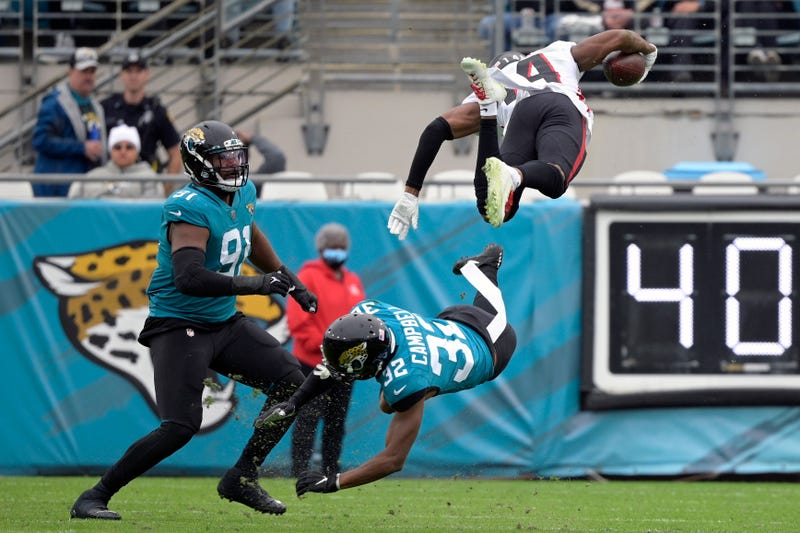 JACKSONVILLE, Fla. (AP) — Cordarrelle Patterson scored twice in his return from an ankle injury, and the Atlanta Falcons found the end zone and the win column for the first time in three weeks in a 21-14 victory over woeful Jacksonville on Sunday.

The Falcons (5-6) managed just a field goal in their previous two games, lopsided losses to Dallas and New England in which they turned over the ball a combined seven times and failed to score a touchdown in consecutive games for the first time since 1987.

They put an emphasis on playing “smarter football” against Jacksonville, and it paid off. It surely helped that the Jaguars (2-9) made all the early mistakes.

Atlanta initially turned Robinson’s turnover into a field goal, but Jaguars defensive lineman Roy Robertson-Harris was flagged for leveraging. That gave the Falcons a new set of downs, and Patterson found a gaping hope up the middle for a 12-yard TD run.

Patterson also had a 7-yard score on the game’s opening possession. He finished with 108 yards rushing and 27 more receiving.

The Falcons led 14-0 and then 21-3 on Matt Ryan’s TD pass to Russell Gage, but the Jags clawed their way back into the game late. Lawrence found Tavon Austin for a score and connected with James O’Shaughnessy for a 2-point conversion. Matt Wright added a 34-yard field goal in the fourth period to make it a one-score game.

Jacksonville forced a punt and got the ball back with 2:14 remaining, but Lawrence threw incomplete on four straight downs.

The Jaguars lost TE Dan Arnold (knee) and LB Damien Wilson (ankle) during the game. Jacksonville did get C Brandon Linder (knee/ankle) and O’Shaughnessy (ankle) back after extended stays on injured reserve, and both played well.

Falcons tight end Keith Smith potentially turned a 10-yard gain into a memorable photo. Smith caught a short pass in the flat in the third quarter and bowled over Jaguars safety Andrew Wingard with a combination of his 240-pound frame and a vicious stiff arm.

The move drew a raucous celebration from Atlanta’s sideline. Wingard responded by slapping his hands together in disgust. Adding to Smith’s moment, Fox replayed the posterization three times from varying angles.

Dante Fowler got to perform his sack routine in his return to Jacksonville. The third overall pick in the 2015 NFL draft, Fowler took down Lawrence for a 10-yard loss in the second quarter and forced a fumble.

Fowler beat tight end Chris Manhertz on a speed move around the edge and slapped the ball out of Lawrence’s right hand. Although Manhertz recovered the loose ball, Fowler got to stand in the backfield and take a huge bow in which he swipes the ground. Jaguars fans got to see it often in his 3½ years with the franchise.

Jaguars: Jacksonville travels cross-country to play the Los Angeles Rams and faces 2016 first-round draft pick Jalen Ramsey for the first time since he was traded early in the 2019 season.