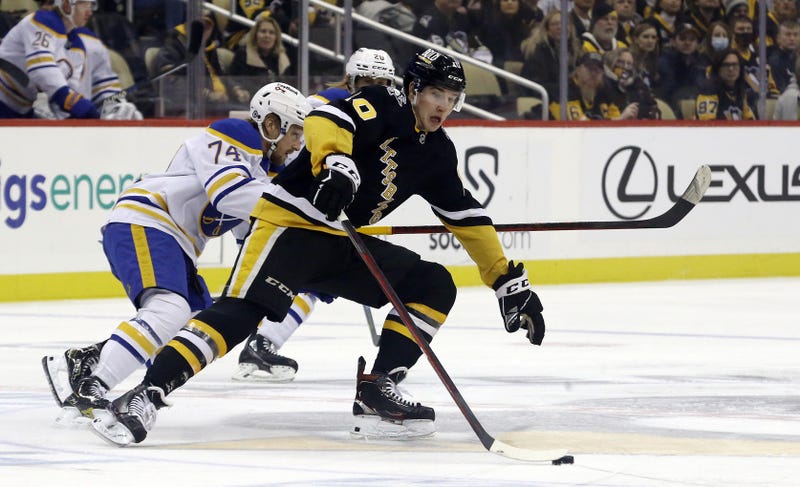 PITTSBURGH (93.7 The Fan) – The Pens begin training camp on Thursday and it’s devoid of major, or barely any, roster battles. Once again, it’s a veteran NHL roster with maybe one spot open for a fourth line forward and a third-pair defenseman. A look at the lineups and options for the 2022-23 season.

There is plenty of competition for the projected Poulin spot.  The projection based on his improvement and the team giving an opportunity to a first-round pick.  It’s by no means a lock, or maybe even probable.  Here is who Poulin would be up against:

A 2017 first-round pick by Montreal, Poehling played in 57 games with 17 points and only six penalty minutes.  Part of the Jeff Petry trade, Poehling had a hat trick in his first game for Montreal beating Toronto on a shootout winner.
The 6’2” center or winger had a couple of injury-filled seasons and if able to find his game again, would be more than a fourth liner.

The Pens 2011 sixth round pick returns on a free agent contract.  A veteran of 243 NHL games, including 14 with the Pens, Archibald has 39 career goals and 32 assists.  He’s known for being a solid penalty killer.

The 23-year-old, 5’9” winger played in his first NHL game in March, had an assist and was a plus two.  He scored 20 goals with 22 assists in 73 games in the AHL, his first season playing in North America.

The 6’3”, 200 pounder played in 22 games with the Pens last year with three goals, two assists and four penalty minutes.  He also played limited minutes in a pair of playoff games last season.  An effective penalty-killer in the minors, O’Connor still needs to prove that in the NHL.  Many believe O’Connor will win that final spot, but Poulin is really pushing him.

There are options defensively with their best prospect PO Joseph, the newly acquired Ty Smith or feisty Mark Friedman who seems to always be around and in the picture.

The 23-year-old hurt by being a left-hand shot with Brian Dumoulin, Jan Rutta and Marcus Pettersson.  He was the key in the Phil Kessel trade a few years ago.  The 2017 Coyotes first-round pick played in four games with the Pens last season with no points, 61 in the AHL with 10 goals, 23 assists and 44 penalty minutes.  Has he improved enough to replace Pettersson?

Helped by being able to play both sides of the ice, the 5’11” Smith was acquired for defenseman John Marino.  The 22-year-old will become a restricted free agent after the season.  The left-hand shot is a former first-round pick (2018) with 43 points (7 goals) in 114 games with the Devils.  Smith does have a minor-league option.

Friedman is also 5’11”, but a right-handed shot that can play both sides of the ice.  Just when you count him out, you see him in the lineup.  He played in 26 games with the Pens last year and dealt with injury himself finishing with a goal, four assists and 23 penalty minutes.