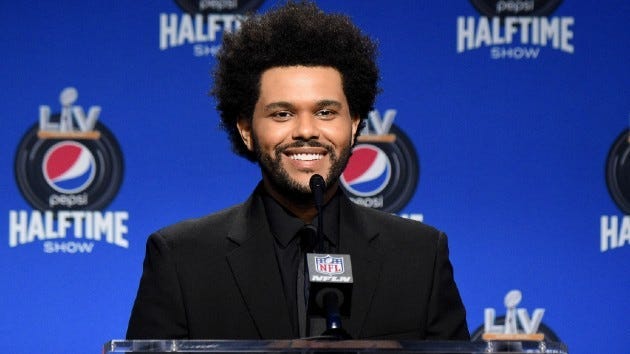 The Weeknd headlines Sunday's Super Bowl halftime show and at a press conference on Thursday, he explained that he'll be toning down some of the violence in his visuals -- and that he'll be performing somewhere other than in the middle of the field.

"Due to the COVID and for the safety of the players and the workers, we kind of built the stage within the stadium," the Canadian star said. "We're also using the field as well, but we wanted to kind of do something that we've never done before."

WATCH MORE: The 5 Most Shocking Super Bowl Blowouts In History

Asked if he plans to sanitize the sometimes violent, bloody and disturbing imagery he's created over the past year while promoting his album After Hours, The Weeknd said, "Yeah, for sure...I definitely wanna be respectful to the viewers at home."

"I will still incorporate some of the storyline," he added. "It's a very cohesive story I've been telling throughout this era...and so the story will continue, but definitely we'll keep it PG for the families."

During the press conference, The Weeknd was surprised to learn that he'll have the honor of being the first Canadian to headline the halftime show solo: The previous Canadian performers, Shania Twain and Dan Akyroyd, were part of larger bills.

As for inspiration, The Weeknd says his all-time favorite halftime performance is the one Diana Ross did in 1996.

"She's just so glamorous...and she has a great exit with the helicopter," he gushed. "She...grabs onto it and flies out into the clouds. It's like, 'I wish I could have done that. I wish I thought of it!'"

When NFL VP of Communications Brian McCarthy joked, "We still have time!" The Weeknd cracked, "I don't think I have enough money to do it, to be honest!"