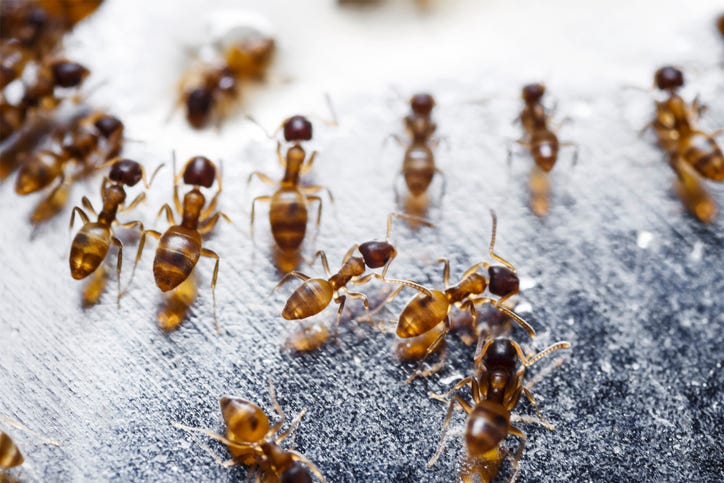 Passengers on a transatlantic flight from Venice, Italy to Newark, New Jersey found themselves surrounded by some unwanted baggage in the form of a barrage of ants.

Charlotte Burns was on the United Airlines flight and was the first to notice the creepy critters by tweeting that “a large fat ant” was on her pillow, according to People.

She continued to tweet by indicating how “minutes later another fat little bug” walked across her TV screen before a third landed on her arm.

On the plane from Venice to New York when a large, fat ant walks over my pillow. Hmmm. That's odd.

When Burns alerted the flight attendants about the ant situation, she was first told to wait until the plane took off and then asked if she’d mind waiting until after meals were served.

While waiting, the progression of ants continued as another passenger, who Burns referred to as “middle aisle guy,” noticed a “parade of six in the overhead locker.”

Burns and middle aisle guy finally got the attention of the flight staff who eventually follow the line of ants to a carry-on bag of a sleeping passenger.

Turns out, the culprit’s bag was not zipped closed, and ants were spilling out and running everywhere. “This is absolutely heeby-jeeby-goose-bumpy-get-me-a-gin-gross,” Burns wrote.

For all her trouble, Burns said she was offered “three kinds of white wine” and noted that other passengers were “unflappable” when it came to the bug situation.

Upon arriving home, Burns treated her luggage using a Zapp bag, a device that uses heat to kill the bugs and revealed she had gotten bit by some of the ants.

And I definitely got bit *shudders* pic.twitter.com/WjL5uNfygo

“We are concerned by the experience a customer reported on United flight 169 from Venice to Newark,” United said in a statement. “We had been in contact with the crew during the flight, where they advised the ants were isolated from a customer’s bag in the overhead bin and was contained to a limited area of the cabin.”

They added: “The airplane landed at Newark this afternoon and has be taken out of service for extermination. We followed proper protocol by notifying customs, immigration, as well as agriculture of the issue.”