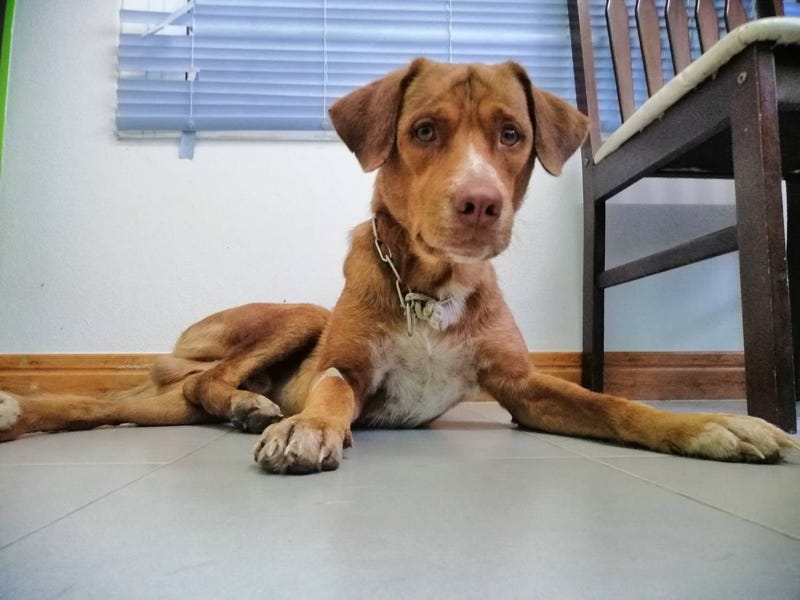 A dog is safe and sound after being found swimming off the coast of Thailad.

A group of workers on the Chevron Thailand Exploration and Production oil rig were shocked to spot a dog out in the middle of the Gulf of Thailand, about 136 miles from the nearest land. The rig’s crew was quick to call to him, encouraging him to swim towards them to safety.

The dog, a brown male Aspin, spotted the rig and complied. As the pup swam closer, the workers kicked the rescue mission into gear and tied a rope around the pup to aid in pulling him to safety.

The dog was washed and fed while his guardian angel humans decided to name him “Boonrod,” a Thai word loosely translating to “the saved one.”

Boonrod was clearly in distress when rescued. One of his rescuers, Vitisak Payalaw, told CNN, "His eyes were so sad. He just kept looking up just like he wanted to say, ‘Please help me.'" Videos and photos of the even posted to Payalaw's Facebook show that the pup was clearly exhausted - too tired to make much of a fuss while being pulled out of the water. Upon returning to shore, the dog was taken to see a vet where he was deemed healthy. His current caretakers agree that the dog is somewhere between three and five years of age.

One of the rescuers reported that no one on the rig is sure how Boonrod found himself in the middle of the Gulf of Thailand, but it’s likely that he either jumped off of a passing ship, or felt inclined to make a long journey from the nearest coast himself.

*** Update *** (15 เมษายน 2562 ) "ตามติดชีวิตน้องบุญรอด" หมาลอยคอกลางทะเลอ่าวไทย" DOG WAS RESCUED FROM THE GULF OF...

Should no one claim the lost pooch, Payalaw is hoping to adopt him himself. They are currently searching for the owner of the pup, but he’ll surely have no problems finding a loving home should no one come forward to claim him.