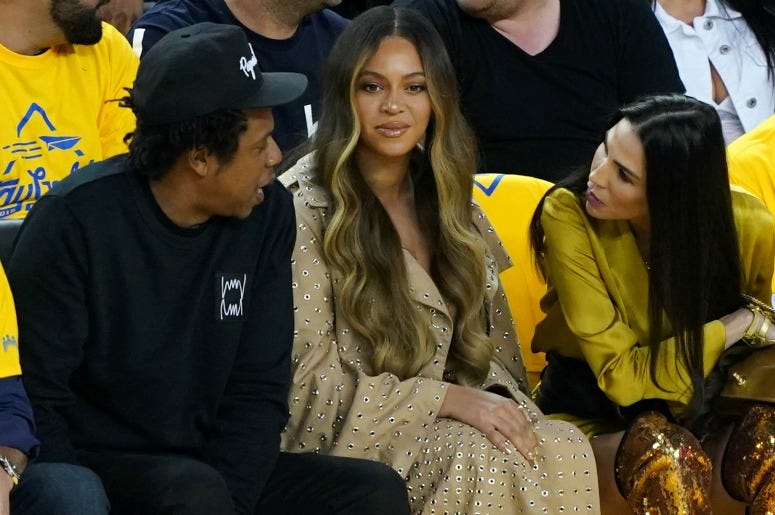 A courtside moment featuring Beyoncé and Jay-Z has gone viral, as a few eye movements and a shift in her chair spoke volumes about the "Crazy In Love" singer's mood.

The couple were at Game Three of the 2019 NBA Finals, seated next to Warriors owner Joe Lacob and his wife Nicole Curran. The camera caught Curran leaning over Beyoncé to talk with Jay-Z, and her reaction is everything.

Jay-Z and Beyoncé are courtside for Game 3 😎 pic.twitter.com/6mmJuN8Odn

Immediately fans took notice, sharing Lemonade lyrics and calling out Curran for daring to talk across the Queen.

I would leave the earth if Beyonce looked this ready to smack me https://t.co/Yaf4JKeMhN

Beyonce: “This Becky with the good hair bout to get her wig split” pic.twitter.com/1BpSWdYzNB

Beyoncé shoving her ass over at the end is the level of petty we deserve from our queen 👑 https://t.co/xDNXipQKiF

Possibly as an answer to the talk on Twitter, an Instagram account believed to belong to Nicole Curran posted a picture of the two. In the photo, Curran has her hand or the star's shoulder or is touching her hair. "We should all help and support each other" wrote Curran.

There was plenty to talk about with both Beyoncé and Jay-Z. This week the first trailer for The Lion King featuring the voice of Beyoncé debuted, and Jay-Z was named the first Hip Hop artist to become a billionare. Just another week for the first couple of music.