Miley Cyrus takes a dramatic turn as Ashley O in the latest season of Black Mirror on Netflix. The "Mother's Daughter" singer plays a pop star battling to break free from her overbearing aunt who is using extreme measures to control her, struggling to bring her real ideas to the surface.

There's a lot that's disturbing about the machine that holds Ashley O down, but you have to admit, her song slaps. In the episode, Rachel, Jack and Ashley Too, the pink-haired pop queen performs an uplifting anthem called "On A Roll."

"I'm on a roll, riding so high, achieving my goals" she sings. It is an upbeat affirmation for teens by Ashley O, but in reality it is a remix of a Nine Inch Nails classic. Cyrus and the writers of the show take the 1990 song "Head Like a Hole" and make it a bop about encouragement. The result is one of the least likely and most infectious songs of the year. 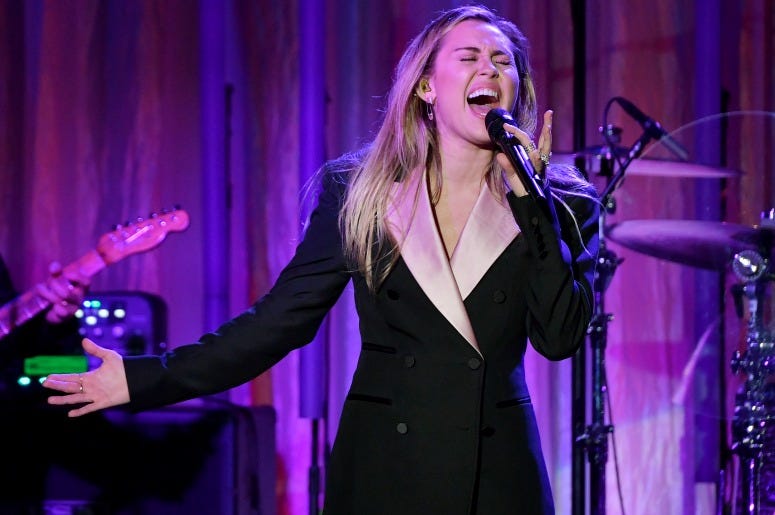 Trent Reznor and the band are already embracing the song and the show, collaborating to make shirts featuring the lyrics. “He thought it was all very funny" explained producer Annabel Jones earlier this month. "He found all of the dark comedy very entertaining."

Dear world, I can hardly recognize you anymore https://t.co/OOawqYV0US

Black Mirror is now streaming on Netflix, and is one of three new episodes for the series. Cyrus recently released her first of three EPs this year, titled SHE IS COMING. It's now available everywhere.