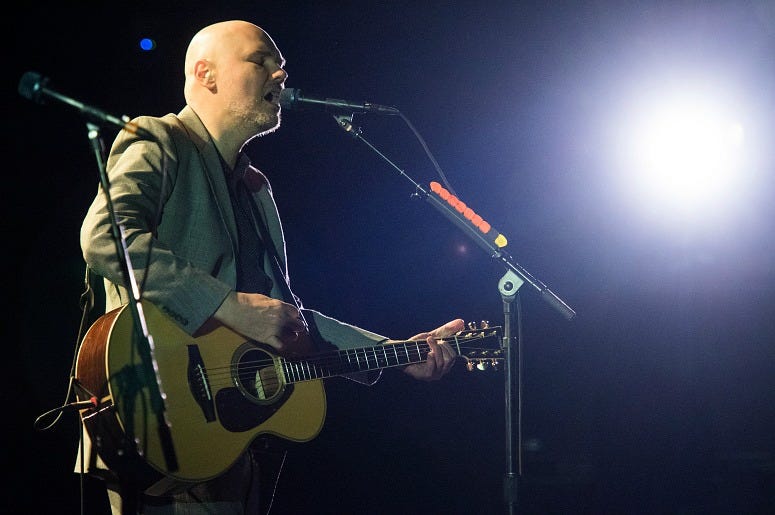 The Smashing Pumpkins have got their groove back.

The band recently celebrated their 30th anniversary, as Billy Corgan reunited with James Iha and Jimmy Chamberlin. The tour and the massive guestlist for a special commemorative show was surpassed only by their stellar new collection of songs, an album titled SHINY AND OH SO BRIGHT, VOL. 1 / LP: NO PAST. NO FUTURE. NO SUN.

With everything coming up Corgan and company, it has breathed new life into the alt legends, creating a wide open path forward for the band's mastermind. "We're already talking about tour stuff for next year, so there will be more Pumpkins shows in 2019" Corgan tells USA Today. "Once we get off tour, I’m either going to be doing some writing in LA with some friends or going back to Chicago to start writing new Smashing Pumpkins."

It seems like the logical next step for a band reborn, but what Corgan said next is what has caused a lot of intrigue this week.

"I also have an inkling to try and get us to do a Christmas record one day, so I might try to use the Christmas spirit to put the record together in concept, even if we're not ready to record it."

While that idea has rankled the internet, as many Corgan comments do, the notion is not as crazy as it seems on the surface. It would not be the first time that The Smashing Pumpkins have dabbled in holiday music. Corgan wrote and recorded "Christmastime" for A Very Special Christmas 3 back in 1997, and while it's not as common as other Christmas classics, it still features the songwriting talents of Corgan and it plays like a joyful, soothing snowfall.

As we wonder what a Christmas album from The Smashing Pumpkins would sound like, it got us to thinking of some holiday collections that are actually bad. These are ill-advised, poorly-planned yuletide disasters and don't belong near any tree or holiday gathering.

Why go sledding when you can go, shredding. Dee Snider and Twisted Sister inject some glam metal into Christmas, when nobody was asked for it.

Bob Dylan - Christmas In The Heart

One of our greatest songwriters, Bob Dylan has weaved poetic tapestries through several decades, along the way becoming one our most iconic artists and even winning a Nobel Prize. The wounded vulnerability in his voice works through tales of love and throughout rich painted pictures of America. Unfortunately, it's really bad for Christmas music.

The Cyberpunk goes soft for this Christmas cash grab, singing standards with the misplaced trademark snarl of Billy Idol.

Scott Weiland - The Most Wonderful Time Of The Year

Scott Weiland was an amazing talent with one of the most distinctive voices in rock history. Unfortunately, at a party once someone must have convinced him that an album-worth of his Bing Crosby impression was a good idea.

The family Christmas classics you would expect from the guy that's famous for "Because I Got High." Gather around for holiday songs like "The 12 J's Of Christmas" or "I Wish You Would Roll A New Blunt."

This list goes on and on, an endless stream of Christmas albums that should never have been unwrapped. Time will tell if a Christmas collection from The Smashing Pumpkins will end up under the tree, or somewhere in this snowpile of shame. Until then, happy holidays. Listen responsibly.