"It took like 7 shows for us, and then eventually being in the hotel room looking at pictures like, 'hey, this is us, this is happening, this is crazy'" says Michael “Mikey” Foster of Social House. Along with Charles “Scootie” Anderson, the duo have been opening up the Sweetener World Tour for Ariana Grande. The songwriters and producers have earned their way on to the stage, after some amazing unsung work behind the scenes and an emerging career of their own as performers. "Literally, this is the most fun we should be having and this is happening right now."

Quietly, the pair from Social House are having one of the biggest years in music, acting as the special ingredient in some of the year's most successful songs. They have collaborated with with Meghan Trainor and H.E.R., and co-wrote "Dinero" with Jennifer Lopez, DJ Khaled and Cardi B, but it's the magic they've made with Ariana that has shot them into another stratosphere.

As Grande has achieved chart history, it has been Mikey and Scootie helping to bring her ideas to your ears, having a hand in writing and producing both "thank u, next" and "7 rings." In the exclusive interview above, Social House tell us about life on the Sweetener World Tour, and how "7 rings" started.

Los Angeles was 🔥🔥🔥 EXTREMELY grateful to have performed at @STAPLESCenter along side legends like @ArianaGrande & @Normani 🙌🏾🙌🏽🙏🏾🙏🏽 we are living DREAMS right now 🥺🥺 🚨 pic.twitter.com/Sz3OzSUZMq

"7 rings was like, a really organic process" says Scootie plainly about the number one song. "They looked at us and said, 'hey can you guys make something that would sound cool, kinda like Sound Of Music', and me and Mikey looked at each other and were ahh" he says with a gasp, spinning his head towards his partner.

"They had just went to the Tiffany's breakfast and bought all the rings and everything" Mikey explains, backing up the now legendary story of the "7 rings" inspiration. "They started singing the song and stuff, and me and Mikey just walked over to the piano and just literally started pressing keys."

Those keys are now the now infamous first notes of the song, haunting and ringing in anticipation of Grande's arrival. "Ari was like, 'yep, that.'" 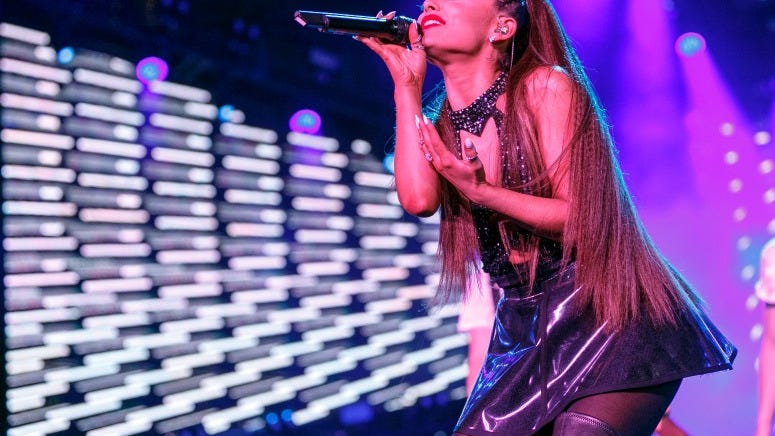 Is Ariana Grande Planning a "Thank U, Next" Body Lotion?

From simple beginnings in the studio, "7 rings" would go on to be Ariana's longest running number one to date, helping make chart history not seen since The Beatles. There at the start of it all was Social House. "Literally it was the first thing we played" smiles Mikey. "It was kind of cool."

To hear more from Social House about working with artists and their spot on the Sweetener World Tour, watch the full interview above. Check out socialhouseonline.com to hear more of their music, and see a full list of upcoming tour dates.