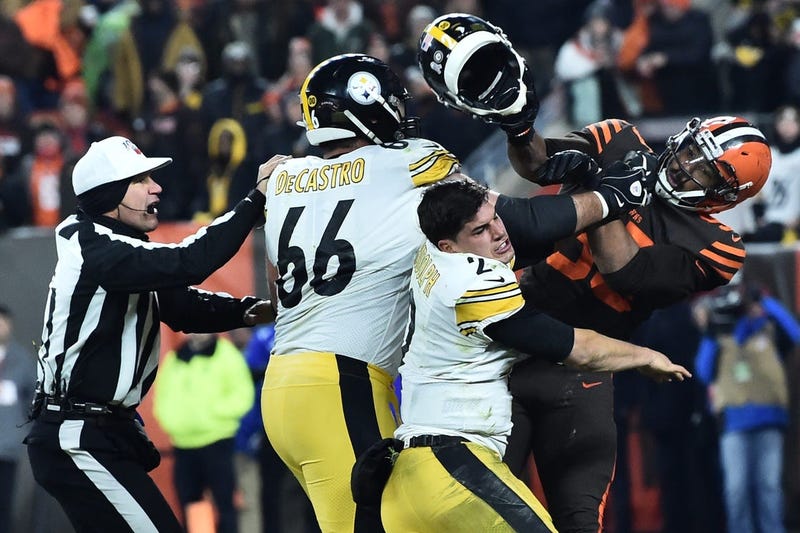 CLEVELAND (Newsradio 1020 KDKA) - No charges have been filed against Browns defensive end Myles Garrett after his attack on Steelers quarterback Mason Rudolph Thursday night, according to Cleveland Police.

"There are no charges filed as there was no police report filed by the person hit with the helmet."

Statement from Cleveland Police Department on Myles Garrett incident:"There are no charges filed as there was no police report filed by the person hit with the helmet."

In the closing moments of Thursday night’s game in Cleveland, Garrett ripped Rudolph’s helmet off of his head and hit him in the head with it.

Garrett is expected to face a suspension but it is unknown how severe the punishment will be.

Mason Rudolph's agent isn't ruling out any of his client's legal options:"I am gathering all information and no options have been removed from the table." https://t.co/DDPZYAOeWW

Steelers Coach Mike Tomlin refused to comment after the game.

But NFL Network and Hall of Famer Deion Sanders said that Rudolph should be fined for starting the incident.

Mason Rudolph should be significantly fined as well for trying to rip @MylesLGarrett helmet off his head which ignited the retaliation. He's not without fault in the unfortunate matter. This is a physical,emotional game played by men. Let's not forget that. @nflnetwork #Truth

Steelers center Maurkice Pouncey could also face a suspension after he punched and kicked Garrett trying to get him off of Rudolph.