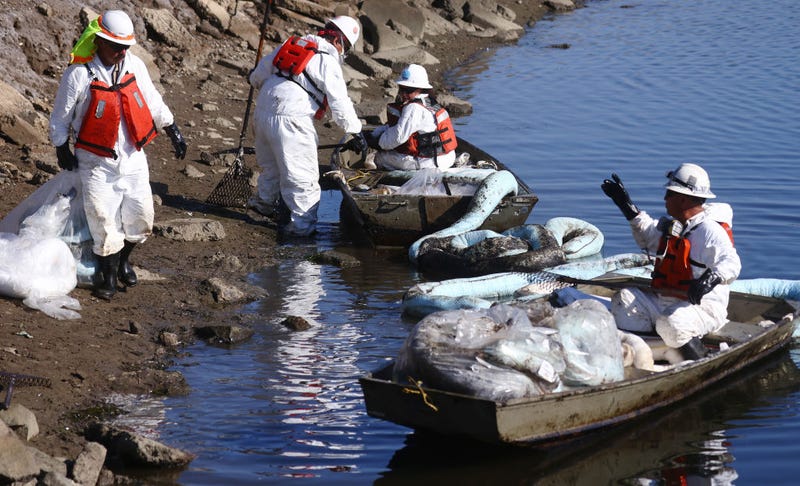 Workers in protective suits clean oil in the environmentally sensitive Talbert Marsh wetlands after a 126,000-gallon oil spill from an offshore oil platform on Oct. 5, 2021 in Huntington Beach. On Oct. 18, 2021 several congressional committees will hear about the impact of the spill on communities in an investigative hearing. Photo credit Mario Tama/Getty Images
By KNX 1070 Newsradio

Members of Congress held a field hearing Monday in Irvine on the impact of the massive oil spill off the coast of Orange County in early October, intensifying calls to end offshore drilling along the California coast.

The "Southern California Oil Leak: Investigating the Immediate Effects on Communities, Businesses, and the Environment" congressional hearing features firsthand witnesses who have been impacted by the spill. The meeting was scheduled for Monday morning at the Irvine Ranch Water District in Irvine.

Thousands of gallons of crude oil spilled into the Pacific Ocean following the offshore pipeline leak, according to officials. News of the spill off Huntington Beach – confirmed on Oct. 2 – came a day after residents reported a petroleum smell in the area.

Evidence collected by federal investigators indicates that the 41-year-old pipeline may have been damaged months ago by a dragging anchor, but only began leaking crude oil recently.

"The exact cause and the circumstances surrounding the leak are still under investigation, and it will take time and patience before we all have the facts that we deserve and need," Alan Lowenthal (D-Calif.), lead of the Subcommittee on Energy and Mineral Resources, said.

"But one thing is sure. We will get to the bottom of the spill and hold the responsible parties - including Amplify Energy - accountable for their actions."

Finding out who is to blame

As of Monday, 250,000 pounds of crude oil have been recovered from the spill, Chair Katie Porter (D-Calif.), lead of the Subcommittee on Oversight and Investigations, said, adding that more tarballs scraped from the water had filled more than a dozen barrels. Porter said that was only a fraction of the environmental impact.

Last week, officials identified Amplify Energy, Corp. as the owner of the ruptured pipe. Porter criticized the company's financial benefits, calling out "the outdated federal subsidies oil and gas companies get," and questioning whether "they were good use of taxpayer money." Porter said the subsidies were a waste of taxpayer dollars, noting Amplify received $5.5 million dollars in pandemic relief last year.

Beta Operating runs the pipeline that leaked thousands of gallons of oil off our coast.

They received $20 million in relief from the federal government.

Bottom line, taxpayers are paying millions of dollars to fund oil production in the Pacific Ocean.

Putting an end to offshore drilling

Not long after Gov. Gavin Newsom declared an emergency in Orange County due to the spill, he called on the federal government to bring and end to offshore drilling.