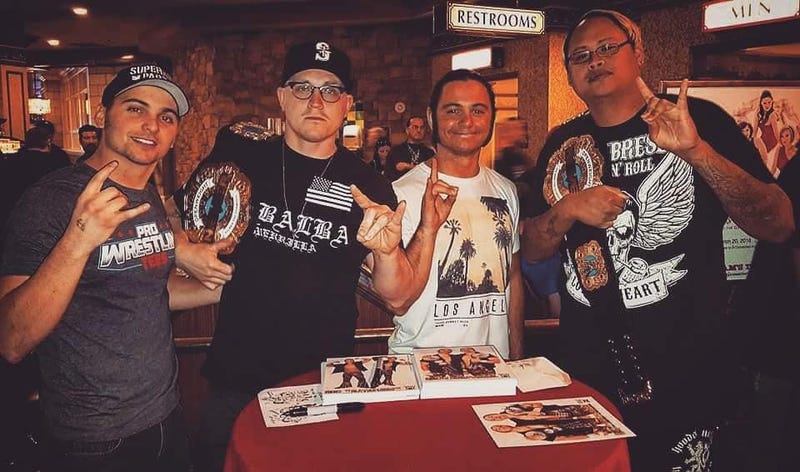 It’s a huge weekend for wrestling fans all over the world, as AEW officially launches with their premiere Pay Per View event “Double Or Nothing” broadcasting live from the sold out MGM Grand Garden Arena in Las Vegas on Saturday night.

For those unfamiliar, let’s do a little catching up. AEW (short for All Elite Wrestling) is a company founded by billionaire investor Tony Khan, Cody Rhodes, The Young Bucks and Kenny Omega. AEW is a direct result of the group’s first event in 2018 “All In” that was a huge success. After all their contracts expired, AEW was officially launched on January 1st, 2019.

The AEW roster is already stacked to the brim, with everyone from huge names like Chris Jericho and the Lucha Brothers to indie wrestling standouts like Joey Janela and Penelope Ford. Northwest fans might notice they also hired fan favorite referee from both 3-2-1 Battle! and DEFY Aubrey Edwards.

But this is just the beginning. Last week, TNT announced they have signed on with AEW to broadcast a weekly wrestling show for the company this coming Fall. This will be the first time TNT airs wrestling of any kind since WCW Nitro aired its final episode 18 years ago.

The wrestling wars are heating back up….

SoCal Uncensored (Christopher Daniels, Frankie Kazarian, and Scorpio Sky) vs. Strong Hearts (Cima, T-Hawk, and El Lindaman) – Six Man Tag MatchThe Strong Hearts are going to blow our minds with their incredibly innovative, high flying offense, but in the end I think SoCal Uncensored will somehow EEK out a victory, as they are one of the top teams that the promotion seems to be based around. Winners: SoCal Uncensored

21-Man Casino Battle RoyaleSonny Kiss vs. Brandon Cutler vs. Ace Romero vs. Glacier vs. Brian Pillman Jr. vs. Sunny Daze vs. MJF vs. Joey Janela vs. Dustin Thomas vs. Billy Gunn vs. Jimmy Havoc vs. Michael Nakazawa vs. Jungle Boy vs. Isiah Kassidy vs. Marq Quen vs. Luchasaurus vs. Shawn Spears vs. TBA vs. TBA vs. TBA vs. TBAThe winner of this battle royale will go on to face the winner of Jericho/Omega to decide the first ever AEW Champion. With that stipulation tacked onto this match, you better believe all the wrestlers involved in this one are going to put it all on the line. There are a ton of talented wrestlers scheduled for this match, but I put my money on the “The King Of The Goths” Jimmy Havoc, as he has proven to go to any extreme to get the job done. Winner: Jimmy Havoc

Kip Sabian vs. Sammy Guevara – Singles MatchWhile Sammy Guevara might have one of the most punchable faces in indie wrestling, there’s no denying the pure talent in this young man. I hate to say it, but Sammy’s definitely going to win this one. Winner: Sammy Guevara

Britt Baker vs. Nyla Rose vs. Kylie Rae – Three Way MatchI’m familiar with Britt Baker and Kylie Rae, but not so much Nyla Rose. That being said, I have watch a bit of her highlights and she appears to be a dominant beast of a competitor. So it might be a long shot, but I’m going to bet on the unknown and say we get a Nyla Rose upset. Winner: Nyla Rose

Aja Kong, Yuka Sakazaki, and Emi Sakura vs. Hikaru Shida, Riho Abe, and Ryo Mizunami – Six Woman Tag MatchI would be lying if I said I was familiar with any of these women except for Japanese legend Aja Kong. What I expect from this match is 100% awesomeness and nothing less. These women come highly recommended from Kenny Omega and with that stamp of approval, you know this is going to be great. If I had to make a prediction, I’d say Aja Kong’s team, as her spinning back fist is a nasty sight to behold. Winners: Aja Kong, Yuka Sakazaki, and Emi Sakura

Chris Jericho vs. Kenny Omega – Singles Match This is a rematch from their epic battle at the Tokyo Dome a couple years back. After a brutal war, Kenny Omega came out victorious last time. Recent photos of Chris Jericho show him bulking up and gaining a ton of extra muscle and mass. I think Jericho is going to do whatever it takes to win. So with both men earning a victory over one another, it could lead us to a 3rd match to determine who the real winner is. Winner: Chris Jericho

Cody vs. Dustin Rhodes – Singles Match Brother vs. Brother! We saw this match in WWE, but it was a bit of a letdown, as it was just one short uneventful match that the company didn’t seem to put much emphasis on. I’m actually looking forward to this match the most and I look forward to Cody doing what he promises in his weekly promos – “putting an end to the Attitude Era.”Winner: Cody

The Young Bucks (Matt Jackson and Nick Jackson) (c) vs. The Lucha Bros (Penta El Zero M and Fénix) – Tag Team Match for the AAA Tag Team Championships These are two of the best tag teams in the world and this match has all the potential to jump to the top of people’s year-end best-of lists. A couple months back, The Young Bucks made a shocking entrance at a AAA show in Mexico and won the tag team titles from the Lucha Brothers. So Fenix and Penta are looking to get those belts back and prove that night was just a fluke. As much as I love the Young Bucks, I’ve had a chance to see The Lucha Brothers in person recently (shout out to DEFY) and I believe their breakneck style will be turned up to 11 on Saturday night, enough so that they will be standing tall over the Bucks in the end. Winners: The Lucha Brothers – new AAA Tag Team Champions