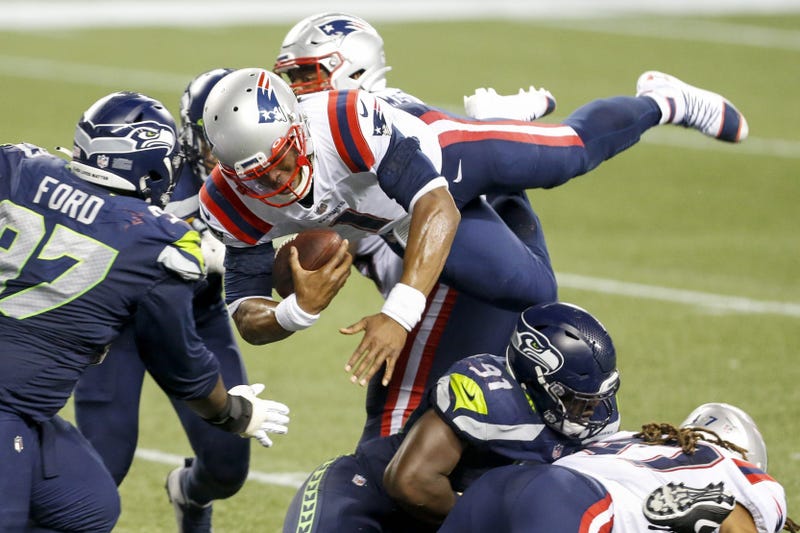 Everybody together now, breathe in for 5, and out for 5. WHAT A GAME! Right from the first kickoff, I found myself intensely glued to the screen waiting to see how it was going to shake out. Not going to lie, that first half scared me (early pick 6, TON of flags, and a sleeping Patriots offense), but in true Seahawk fashion, the boys came to play in the second half.

I didn't think it would be said from me this year, let alone this early, but what the heck is up with Greg Olsen? The guy's a quality TE, but he was more of a liability out there on offense. Thank God for Hollister making another dramatic appearance. What can I say, Russell looked smooth as butter out there again, that new O-line that he's working with gave him an even better showing this week, against a harsher defense. He looked calm, cool and collected shooting to Tyler all day, DK, Moore, and a surprise appearance by Mr. Swain for the Touchdown! Running game looked just as solid. Still loving the Carson-Hyde-Homer triple threat we've got going on. Solid top to bottom. Loved it. I'm not even looking at that early pick anymore. Flukes happen.

THAT WAS BEAUTIFUL@DangeRussWilson ➡️ @dkm14 for the 54 yard touchdown ❗️

Say it with me, JAMAL ADAMS! People can keep their skepticism about what the organization traded for him, he's the real deal. On top of that, he's not only become a very loud factor in our defense, but the quiet factor is even scarier. Example: Has anyone heard Bobby's name said this season yet? Shaq? Blaire? Irvin? Sure they've had their highlights for sure, but while all eyes are on Adams, all those other players are now quietly able to relax and just do their jobs. I think Thompson and McDougald were developing and may one day be contending defensive players, but while they were with us, Bobby was running for his life not only covering his position, but theirs as well. I don't think he has to worry about that anymore when it comes to Adams. He's secured it, he's trustworthy, and we're seeing the brewing of a very real, dangerous defense, and I'm VERY excited to see it grow.

Quinton Dunbar was right there and gets the PICK ❗️

All this brewed together to make the most intense and exciting game of football over the weekend by far, all coming to a sweet sweet ending featuring Cam Newton getting rightly stuffed, as he attempted to shine in glory with his own greatness, and met the new Hawks defense. Closer than I would have wanted, but a sweet victory nonetheless. Keep the roars coming 12s, there's a lot of season left, and we're welcoming the Cowboys into the chamber once again next week. With that...Mike Hawk is OUT!

That'll do it ❗️ pic.twitter.com/SQR6ndhmnV