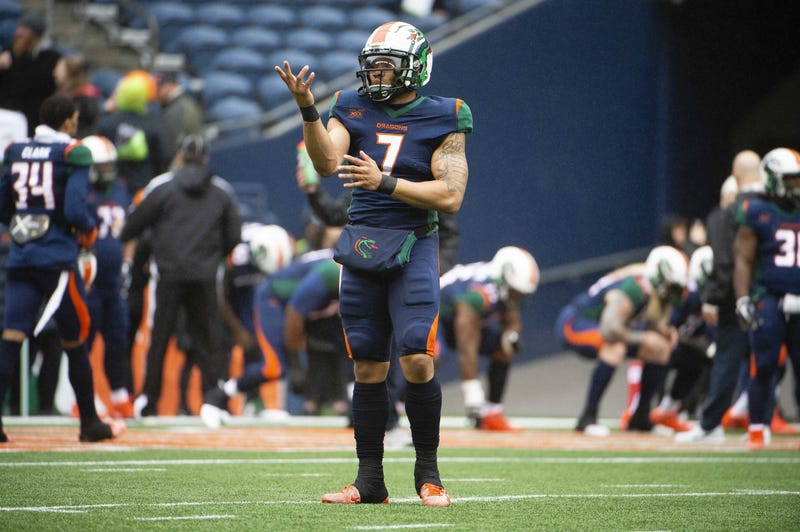 Well, if you're like me, you didn't quite enjoy seeing our Dragons come up short in this last week's contest against the St. Louis Battlehawks, but not for the reasons you may think!

To get you up to speed in case you missed the game, we went in knowing that the Battlehawks were going to be a challenge especially with them being the #1 team in the East Division. At first, everything was going according to plan on paper, our offense couldn't put up more than 3 points, and our defense couldn't keep less than 17 points off the board. But after halftime, Coach Zorn talked with the media before the start of the second half to reveal, there would be a change at quarterback for the remainder of the game, ushering in a familiar name in Seattle Football, BJ Daniels. Following that change, the team saw new life, putting up a whopping 13 points, with the defense putting a stop to the Battlehawks, keeping them to a small, but ultimately game-winning 6 points.

While nobody likes to see their team lose, I found that second half to be the most entertaining we've seen. Daniels under center for the Dragons created a noticible difference. Passes were getting caught, runs were being made, Daniels himself is a duel-threat QB in that he's got a set of legs on him as well, and boy did he use them! With the spark in life on offense, you saw a noticible change to the defense as well, there was something to gain from all of their efforts. Suddenly, nothing the Battlehawks could do was enough. Ta'amu, who in my opinion is one of the best QBs in the league, was left shaking his head at the fact that he just couldn't make it happen anymore.

The team that I saw in the second half of this game, is a team that could be the true threat of the West. They're starting to find their stride and their chemistry, and not a moment too soon. We've got our toughest fight yet this weekend gang, the undefeated Houston Roughnecks. Houston has shown themselves to be a team that does not give up, they play until the final bell, with probably THE BEST matchup in PJ Walker and Cam Phillips. This will not be an easy contest, but it can be a defining one. Personally, I think we can do it, I think they can do it, and I crave to see Houston bow their roughnecks in agony as they mourn the loss of their perfect record to the new champions in the West, The Seattle Dragons. See you all Gameday, with that....Mike Hawk is OUT!