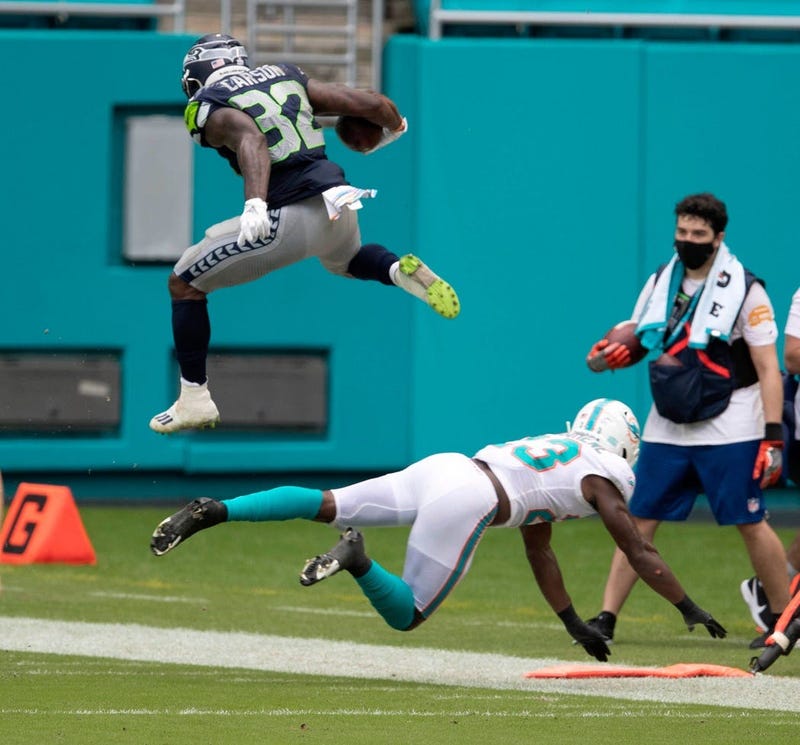 We are FOUR LOKOHHHHHHHHHHHHHHH! Holy cow these boys continue to produce out on that field. I'm not going to lie, I was a little afraid that Miami would be our come-uppance, our "due loss", our "equalizer", our "humilitator", just based on the fact that we have a history of throttling back and taking an easy stroll through these weaker teams, but then find ourselves way too close to the wire, sometimes to our detriment, but this week was played PERFECTLY!

In a stunning turn of events, Tyler Lockett was given a well-deserved break out there on offense this week. Knowing what kind of player he is, he never let his guard down, and always worked to give Russ an option for a throw, but I don't think he was the target for the game until that last drive. Wilson dumped a couple passes his way that I don't think were even meant to be caught, but I didn't see him utilized as a serious option until the end. That being said, Metcalf, Moore, Swain and even a couple vitals from Olsen made for an air raid that wouldn't quit. And when it seemed like it was starting to, the 1-2 punch of Carson and Dallas was just devastating. O-line held up like a stone wall and it was just beautiful. Great work.

.@DMoeSwagg23 hauls in the 17-yard touchdown 🚀 from @DangeRussWilson to extend our lead!

Who called it? Who freakin called it? Jamal Adams sat on the sidelines for the game this week, and I 100% believe that was due to the competition. With a strained groin, he could have easily toughened up against a team of repute, but against the Dolphins, I wasn't surprised at all to see him have the week off. That being said, he was barely missed out there. Griffen coming back with some serious fire with a pick, and how about that Ryan Neal? 2 for 2 baby! Defense still needs a bit of a tune up around the edges, but this was certainly the game to experiment with what works and what doesn't, and how they can improve. I was very happy with what I saw, make no mistake, that tight game was a necessary designed evil.

Aaaaand @ShaquillG said NOPE ❌ and comes up with a huge interception!

All-in-all the boys are doing great and getting better with each game this season, and we've got another serious, yet meh, team that we're hosting next week, the Minnesota Vikings. Here's what I'm worried about; Cousins is a good arm and can place the ball just right, especially when it comes to Rudolph, Theilan, and Jefferson. Along with that, they've got one of the most slippery and dangerous running backs in the league with Dalvin Cook. Our defense is our weakness, and it's when it goes to the air. Having Adams back will help us a TON, but our corners and safeties need to step it up if we're going to avoid getting destroyed. Still optimistic, and still know they can make it happen. I'll see you next sunday 12s. With that....Mike Hawk is OUT!