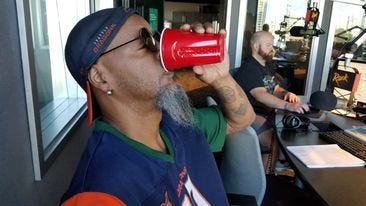 The idea of me asking you, dear reader and time-waster, a question is quite idiotic.  We're not actually conversing, texting, Tweeting, Facebooking or in any type of real-time position to have a conversation, so what's the point?  Frankly, there isn't one, but I'm gonna ask you something anyway.

Are you listening to the Appy Hour?  Are you even aware that it exists?

That was two questions.  Apologies.

The Appy Hour is... in case you don't know... a 30 minute thing we do EXCLUSIVELY on the Audacy app right after the show, Monday through Friday.  At 6 o'clock sharp, we go live on the App and do another 'show'.  The beauty of it is that the inter-webs aren't governed by the FCC.  The FCC isn't ALL bad, but they are most certainly the fun police, the 'Karen' of broadcasting, if you will.  The FCC is like the person who adds raisins to their chicken salad.

Anyway, without the FCC's oversight, we have the opportunity to speak a little more freely, meaning, of course, that we can cuss and discuss more profane topics.  It's kinda like going from network TV to Netflix or HBO.  It's been pretty liberating.  And it's not that we feel terribly restricted on the show, but there are just some things we CANNOT do.

For example, one of the things we've been doing is 'the history of curse words'.  It's actually been an interesting rabbit hole to go down.  We also do "FCC Redemption", where we all attempt to read a tongue twister without cursing.  "Dirty Big Dummy", "Man vs Beast", and a bunch of other dumb stuff.