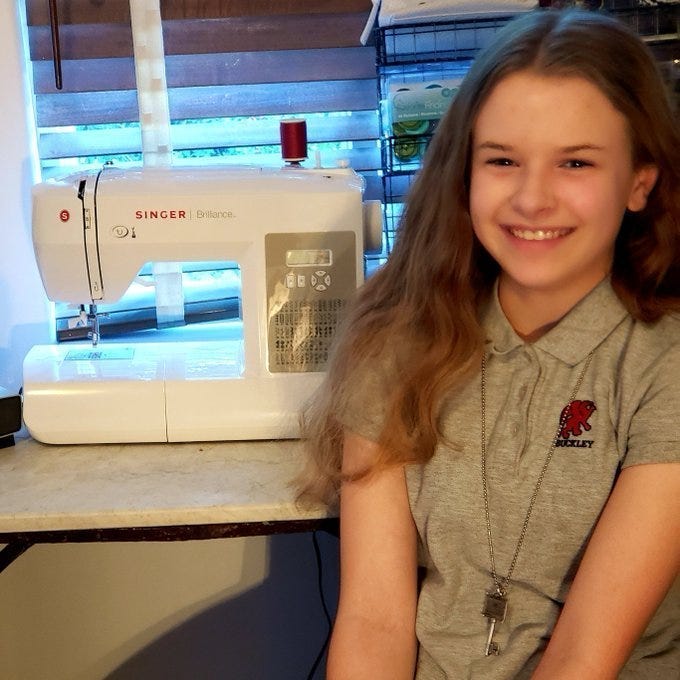 Madeleine Fugate, a 13-year-old from Studio City, Calif., is on a mission to make a #CovidQuilt to honor those who have died from the virus.

She needs some help making it happen.

Inspired by The AIDS Memorial Quilt, Fugate came up with the idea as part of a project for her 7th-grade class at the Buckley School.

"It's usually something where we have to give back," she says.

Since this year’s theme is about change-makers in a world of COVID-19, she felt she could use her passion for quilting to create something that will live on as a reminder of the lives lost.

"Nowadays people just look at them as numbers, they don't really think of them as people anymore. And they're still people and we should remember them," Madeleine told KNX 1070 News reporter Margaret Carrero Wednesday.

Her mother Katherine got the chills when she first told her about it.

"And I thought 'that's a good sign,' when she said 'those are people,' that simple reminder, I said 'this needs to be done, '" Katherine says.

Madeleine Fugate, a 13-year-old from Studio City, is on a mission to make a #CovidQuilt to honor those who have died from the virus. "People just look at them at numbers, they don't really think of them as people anymore... we need to remember them." @KNX1070 pic.twitter.com/8SlUCfa0qJ

Madeleine needs as many 8 by 8 quilt squares as she can get from family and friends who have lost someone to the virus – they can simply include a name, a photo, or maybe their favorite sports team.

She needs at least 20 squares before May 12.

While she’s doing this for school, she hopes the project will grow to honor everyone who died.

8x8 MEMORIAL SQUARES SHOULD BE MAILED TO:

Trending Coronavirus Coverage From RADIO.COM—Disney World receives guidelines for when parks eventually reopen—How likely is a second stimulus check?—Families face ‘tough love’ conversations as coronavirus infects whole households—6 creative ways to celebrate Mother’s Day while social distancing—No stimulus check yet? 6 reasons why it may be held up—Doctor who pushed vitamin treatment for COVID-19 charged with fraud—Heartburn medicine being studied as possible treatment for coronavirus—30-year-old teacher dies of coronavirus after symptoms were dismissed as panic attack