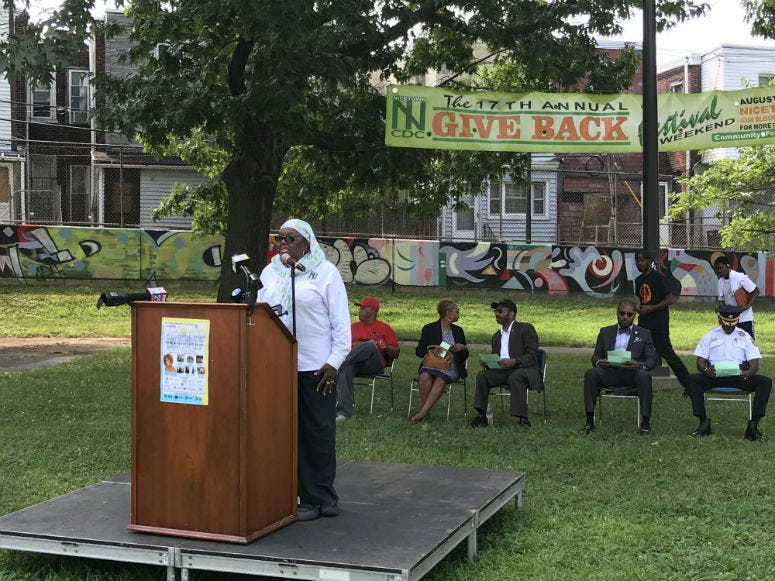 PHILADELPHIA (KYW Newsradio) — A Philadelphia neighborhood heavily impacted by gun violence is coming together to say enough is enough in a joint effort between the community and police.

Over the last decade, Zakarriyya Abdur-Rahman lost two of his sons to what he calls senseless violence. He's now channeling those tragedies into fuel to help him change his Nicetown community for the better.

One of his initiatives is holding a Walk for Peace on Saturday, Aug. 10.

"The walk for peace is an effort to demonstrate we need to come together and empower ourselves and do what it takes to stop the violence, and also bring about growth and development into our community from ourselves for ourselves," he said.

Taherrah Abdur-Rahman, his wife, didn't let the death of her two sons keep her from trying to make a difference.

"We lost two boys," she said. "I look at that as the angels is always working where we can always give back and keep moving."

Zakarriyya wants the walk to be a wake up call to stop the gun violence that's plaguing the city.

"In hopes that we're able to help other people not go through what we went through as a family," he explained.

The walk is a partnership between the Nicetown neighborhood and Philadelphia police, and police Inspector Deshawn Beaufort says he wants the people who come out to the rally to be inspired to work with those at risk of being involved in violent acts.

"We want to have as many citizens of Philadelphia involved in stopping violence, period," Beaufort said.

"I'm just going to keep my head up, keep the faith, and do what we do."

In addition to the walk, they are also giving away a scholarship in honor of their sons to students in the neighborhood, continuing their education beyond high school.

Nicetown residents will also be celebrating their 17th Annual Give Back Community  Festival and Concert during the weekend.

"We have sports, multicultural vendors bazaar, service providers, nonstop performances. We have live bands," said Majeedah Rashid with the Nicetown CDC, the main sponsor of the event.

Rashid said the event is more than just getting neighbors to come together for food and music.

"We engage them. We want to educate them. Through education, mobilize them to take part in restoring their community."

Philadelphia Councilwoman Cindy Bass echoed that statement, saying the event is imperative for the growth of their community.

"Access is everything. We don't want to just be in parts of the district that some folks have access to resources and what not. This is where you need to be. These are the folks who need access, who need to be connected," Bass said.

The councilwoman added that at its core, the event is about neighbors taking back their neighborhood and building it up.