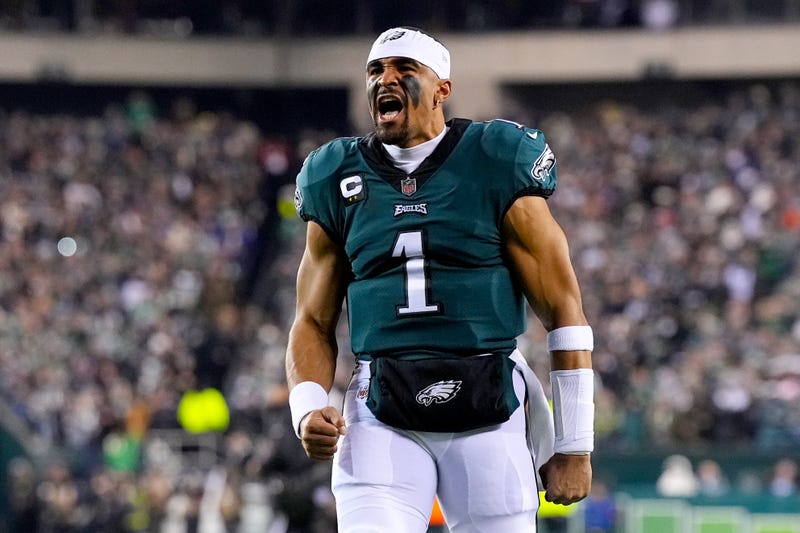 PHILADELPHIA (KYW Newsradio) — The Philadelphia Eagles are two wins away from their second Super Bowl championship in five seasons after demolishing the New York Giants 38-7 in the NFC Divisional Playoff.

The Eagles’ run game destroyed New York all game long with 268 yards rushing, while quarterback Jalen Hurts had a nearly-perfect first half throwing the football.

He produced two scores through the air and one on the ground, and the Eagles’ pass rush dominated New York quarterback Daniel Jones and company, giving Philadelphia a 28-0 halftime lead that the Eagles easily protected for their third win over the Giants during the 2022 campaign.

"When the motivation is for each other, it doesn't matter who we play. It's about not letting your teammates down." 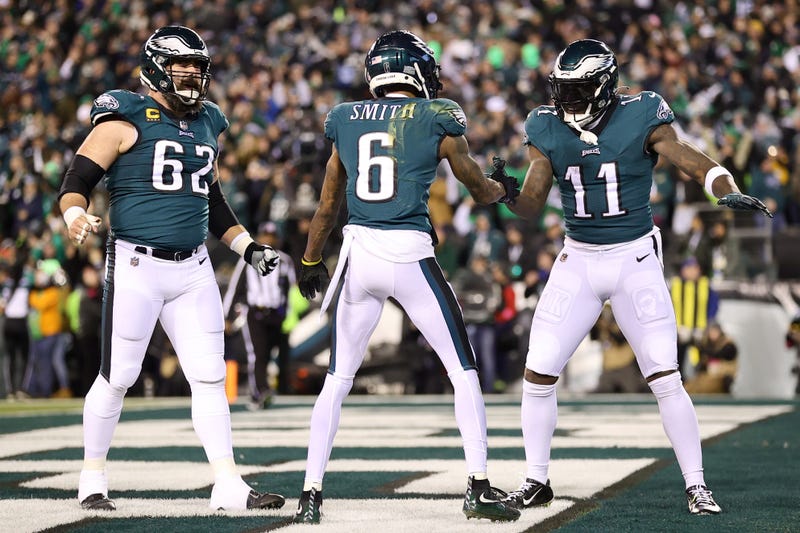 DeVonta Smith of the Philadelphia Eagles celebrates his touchdown with teammate Jason Kelce and A.J. Brown during the first quarter against the New York Giants in the NFC Divisional Playoff game at Lincoln Financial Field on Jan. 21, 2023 in Philadelphia, Pennsylvania. Photo credit Tim Nwachukwu/Getty Images

From the beginning, Hurts’ injured shoulder was not a bother at all, as he connected on every pass attempt in the opening quarter. His first throw went for a 40-yard gain.

Hurts’ fifth consecutive completion to start the game went to tight end Dallas Goedert, who one-handed it and took the ball in for the Eagles’ first touchdown, all coming in the game’s first five minutes.

Eagles come out moving right from the jump.

One-handed snag by Dallas Goedert and he’s in! #FlyEaglesFly @goedert33

“I love when I can touch the ball early,” said Goedert. “When I get it, I always say I try to make plays.”

Effective pressure on Daniel Jones that drive with two sacks for Haason Reddick -- this his first NFL postseason game and playing for his hometown team.

Love that @Haason7Reddick is an Owl and an Eagle. #TempleMade

The Eagles’ run game subsequently led a march down the field, and Hurts’ seventh straight completion went to wide receiver DeVonta Smith for Philadelphia’s second touchdown through the air in about nine minutes, creating a 14-0 lead. Hurts went 7-7 for 89 yards and two touchdown passes in the stanza.

#Eagles are dominating the Giants. Dominating.

“He's like having Michael Jordan out there. He’s your leader,” said Sirianni after the game. “That's the biggest respect I can pay to him … this guy leads.”

"I think it was very important for us to come out and start fast, and I think as a football team, we just came out and we played with a lot of energy," said Hurts. 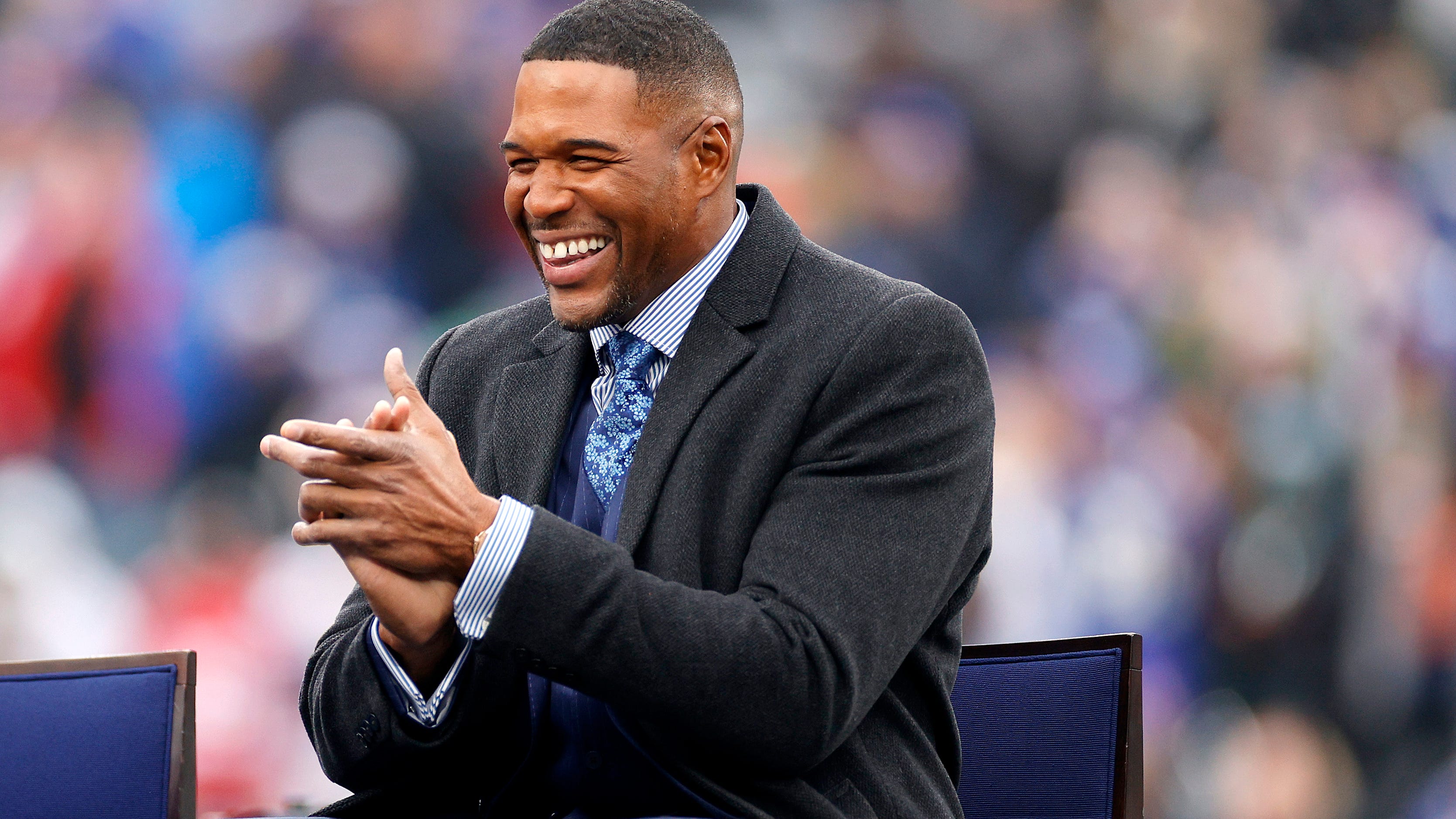 Michael Strahan on Eagles fans: 'By far the meanest city…meanest people. But it was motivating'

Again, the Eagles’ ability to snuff out the opposing passing game came to the fore as the first quarter ended, as cornerback James Bradberry picked off Jones. 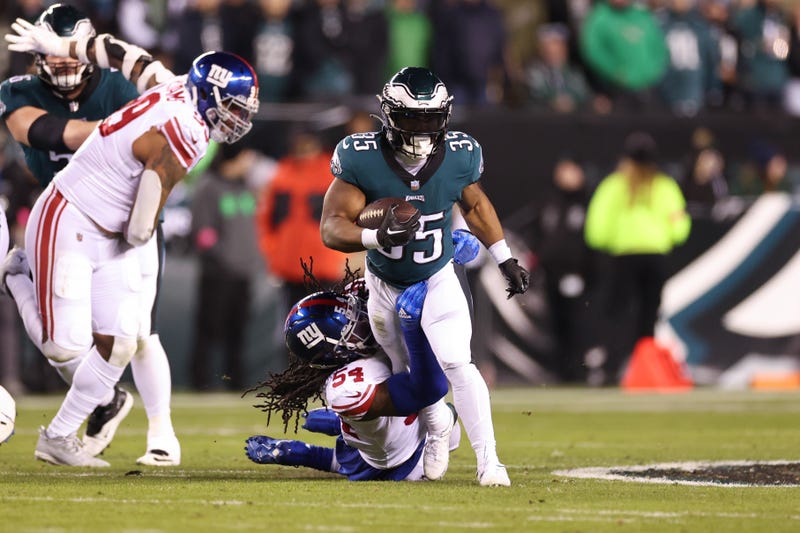 Boston Scott of the Philadelphia Eagles carries the ball against the New York Giants during the second quarter in the NFC Divisional Playoff game at Lincoln Financial Field on Jan. 21, 2023 in Philadelphia, Pennsylvania. Photo credit Tim Nwachukwu/Getty Images

It took a purposeful throwaway by Hurts on the second quarter’s first play to force Philadelphia’s first incomplete pass of the night, and its first punt, but the defense continued to force the Giants to give up the football, and their quarterback’s contact lens.

Running back Miles Sanders’ legs and the power of the Eagles’ veteran offensive line delivered first-down run after first-down run, though the second of those gains led to an injury for Philly lineman Landon Dickerson.

Boston Scott ended the mostly ground-based drive with a two-yard run that exploded the Eagles’ lead to three scores, 21-0. It was the running back's 11th career touchdown against Big Blue out of 19 total scores during his career.

Some things in life are guaranteed to happen. Boston Scott scoring a touchdown against the Giants is as close to that as it comes -- if not guaranteed. @KYWNewsradio #Eagles

The Eagles’ multi-dimensional, deception-based offense even led to a score when a snap from Jason Kelce to Hurts went off his hands. Hurts easily recovered and waltzed into the end zone with 43 seconds left in the first half.

.@JalenHurts doing what he does 🙌

“He's tough as is as they come,” Sirianni added about Hurts. “Nobody has played better football than him this year.”

Philadelphia outgained New York 259-64 in one of the most dominant halves in Eagles playoff history. On his own, Sanders produced more yards than New York, 75-64.

Coasting to a championship game

Running back Saquon Barkley finally got the Giants a big offensive play, with a 40-yard run early in the third quarter which finally put New York in position to get on the scoreboard. The Giants’ Matt Breida took a handoff from Barkley during a trick play that gave the Giants their first points, but they trailed 28-7 with 6:15 left in the period.

The Eagles’ first two attempts with the football in the second half didn’t pan out with any points, but the second half became an exercise in mauling the Giants’ defense with run after run behind Kelce, Lane Johnson and company. A 30-yard Jake Elliott field goal with 5:20 left in the game padded Philadelphia’s lead to 31-7.

#Eagles have killed 6+ minutes on this drive

Kenneth Gainwell ended the scoring in style with a 35-yard scoring run in the final two minutes of the contest.

.@KENNETHGAINWEL goes over the 100-yard mark on this TD 🙌 #FlyEaglesFly

New York simply could not create enough offense to mount a serious comeback, as the NFL’s second-ranked defense shut the Giants down thanks to the schemes of defensive coordinator Jonathan Gannon.

“He doesn't get respect,” Sirianni lamented about the treatment Gannon has received in recent years.

“This guy is an incredible coordinator. People love to play for this guy."

“He does a good job of putting together a scheme to go against the opponent, and I think he did a good, good job game-planning them and he knew how to prepare us,” said Bradberry.

“He knew what they were going to do. That's how he called the game, and it put us in a good position to make plays out there."

Eagles fans, some of whom came 12 hours before game’s end and still tailgated while waiting since the morning for parking lots to open for tailgating, left South Philadelphia knowing their Birds are just 60 minutes away from the franchise’s fourth Super Bowl appearance.

Either the archrival Dallas Cowboys or the San Francisco 49ers, who meet Sunday evening in Santa Clara, California, will attempt to block the Eagles’ way.

The road to victory in the Super Bowl still comes through the Linc in the NFC Championship Game on Sunday, Jan. 29.

As passionate Eagles fan Vincent Marinelli said during Saturday’s win, “Nobody comes to Philly and beats us.”

Antionette Lee contributed to this report.