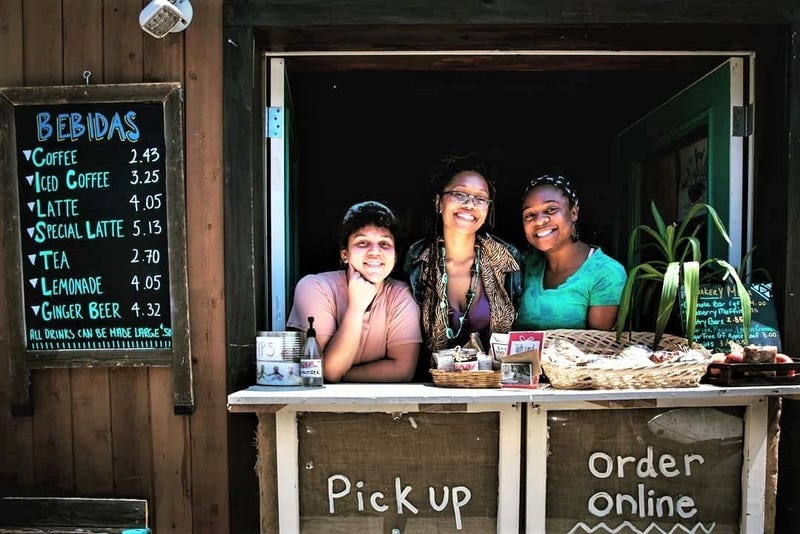 PHILADELPHIA (KYW Newsradio) — A cafe in East Kensington hit hard by the pandemic is celebrating after a successful crowdfunding campaign saved the day. The cafe owners are now buying their building.

“Our numbers dropped from like $600 to $700 a day to like $50 a day,” said Blew Kind, co-owner of Franny Lou’s Porch on Coral Street in East Kensington. “And then we had to figure out what to do next. It was a wild ride.”

The ride came just as Franny Lou’s was entering their busy season last March. Catering sales were up, as were in-store purchases. So when the pandemic closed their doors, they had to think fast.

“It first started with a window,” Kind said with a chuckle.

The window was what allowed the cafe to keep its community connection.

During pre-coronavirus times, the cafe also hosted artists and provided space for individuals with no brick-and-mortar to sell their products.

“That’s our soul. This is soul work,” said Kind. “It’s about community and being here for each other.”

“We had to pivot and adapt so quickly,” said co-owner Chantelle Todman.

She came on board as a partner during the pandemic, lured by the solid foundation and integrity built in the community over the past few years.

Todman said Kind and fellow co-owner Ashley Huston all breathed a sigh of relief when things seemed to work out this summer. But when the owner of the building put the property up for sale, they decided to expedite a long-term plan.

“We looked at each other and said, ‘we have to make a move and try to buy this building,’” recalled Todman.

The trio applied for grants, and a few came through.

What happened next shocked them.

“I kept looking at it every day and it kept going up,” said Huston. “I knew Franny Lou’s was hot when other businesses and nonprofits were sharing it.”

Within days, they surpassed their goal, raising upwards of $86,000.

“It just feels really good when you walk into that space,” Dowdy said, “and it’s been my goal to support women, specifically young Black women, and what they’ve done here is so special.”

Two years ago, Kind said she was homeless, sleeping at Todman’s home and ready to shutter the cafe. This week, they signed a sale agreement for the property.

“Our mission is dope and we’ve been consistent. And now people are finally getting why we are doing it,” said Kind.

Kind, Todman and Huston say everything is about community.

“If people in our community can make this happen in a week,” said Todman, “what’s impossible?”

Many Black-owned businesses in Philadelphia had no choice but to rely on crowdfunding to make it through tough times. Others closed for good.

Franny Lou’s has a bright future, but only because they had community behind them.

“Your community is where it’s at,” said Huston. “It’s who’s got your back.”