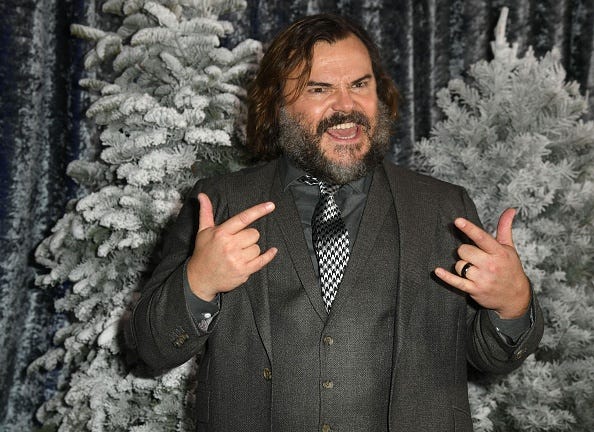 Jack Black has starred in so many classic films, he’s having a hard time keeping track of them all.

At the premiere of his upcoming film “Jumanji: The Next Level,” Variety asked Black about his favorite holiday movie.

While everyone (including the interviewer) expected him to say beloved rom-com, “The Holiday,” in which he starred alongside Kate Winslet, the actor instead offered up another beloved classic: “Elf.”

“Jon Favreau — I don’t know if I’m saying that right — and Will Ferrell just knock it out of the park.”

The interviewer admitted she was impressed that the actor didn’t name his own Christmas film, which confused Black, who genuinely seemed to forget about the flick.

“Do I have a Christmas movie? Which one is mine,” he asked before making the connection and offering up the “correct” answer.

“Oh, 'The Holiday,'” Black shouted adding that writer and producer “Nancy Meyers is a genius.”

As he nonchalantly walked away, he cleared the air once more shouting, “Obviously, 'The Holiday!'”

The 2006 film is often included on best holiday films lists.

Also starring Cameron Diaz and Jude Law, the plot finds two troubled women, one from America and one from England, swapping homes for the holidays and falling in love with local men.

Black is currently reprising his role as Professor Sheldon “Shelly” Oberon in the "Jumanji" sequel alongside Kevin Hart and Dwayne Johnson.