(SportsRadio 610) -- During a team drill toward the end of Texans training camp practice Friday, Deshaun Watson stood about 35 yards away from the action.

He walked around the back end zone, knelt on a towel and kept his Texans helmet by his side.

It was the most transparent display of Watson's desire to be traded from the team that we've seen since the news surfaced in January, after Nick Caserio was hired as general manager.

But after a few moments, Watson was left alone while everyone else went back to doing their jobs.

And what Watson's job is right now, as he only reports to training camp to avoid daily $50,000 fines, could not be less clear.

The team appears to have moved on from Watson, and likewise, but here they are stuck with each other until a trade is finally consummated.

Meanwhile, Watson's teammates are supporting him.

“He's part of the team," Taylor said. "When we come out here, we're all focused on working and getting better at every aspect, and that's different for every person, but my focus has been leading the group, executing when the opportunity is presented, and just focusing on being better each day."

When asked if Watson's been useful to Taylor in learning the offense, Taylor noted the friendship between the two quarterbacks.

"Me and Deshaun are friends," he said. "We've known each other for a number of years now. We've had conversations on the field, off the field, about football, about life. Everything has been a positive conversation, and it will continue to be that way."

Texans 10th-year pass rusher Whitney Mercilus has been Watson's teammate since he was drafted in 2017. On the field, Mercilus is glad to have a leader like Taylor, who's entering his 11th season. He also showed clear support for Watson personally.

"With Deshaun, that's my guy," Mercilus said. "Love him to death. Hate what's happened to him. Just bring it for him every day honestly. Man, everything will sort itself out. God got it. I know that for a fact. He's my guy at the end of the day." 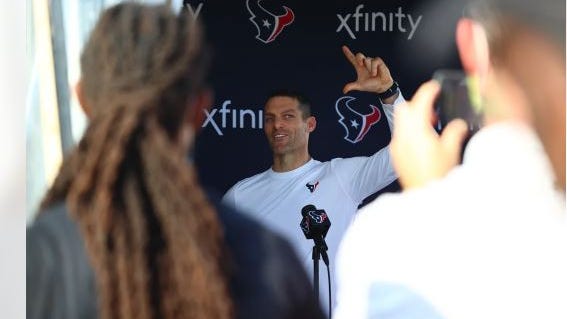 Nothing in the NFL surprises Texans GM Nick Caserio