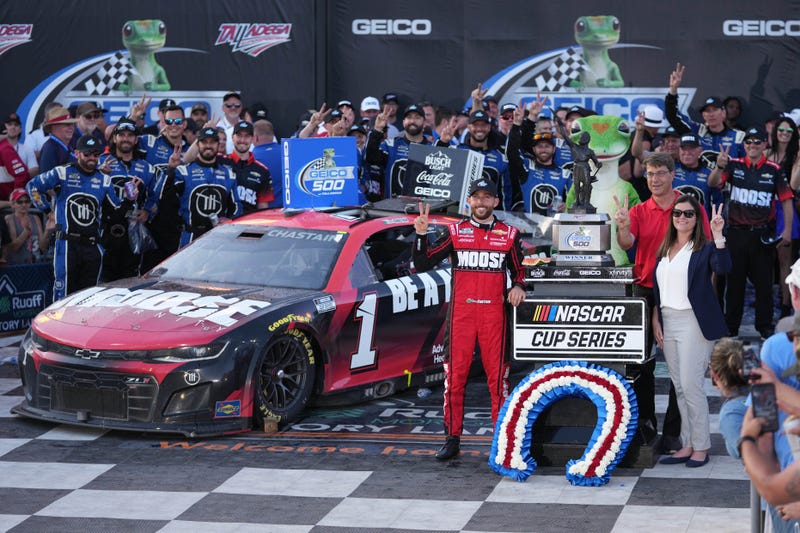 When thinking about NASCAR's most iconic tracks Talladega certainly is one that comes to mind quickly. The Super Speedway is often an incredibly fast track producing both blazing speeds and memorable crashes. Sunday's race saw a late race shuffle on a savvy last lap move. On the final lap, Ross Chastain made a move inside when race leader Erik Jones (no relation),went to the outside to block the hard charging Kyle Larson. As both drivers drifted too high, Chastain dipped low and was able to steal the win in the final thousand feet.

The win for Chastain is his second of the 2022 season and his second career victory on the Cup Series. He now joins William Byron, as the only drivers to win more than one race this season. The high side drift by Jones and Larson caused a wreck behind them, costing both drivers spots in the finish.

The last lap crash did however allow some drivers to move up in the finish order. Austin Dillon was able to secure the 2nd place finish, after his brother Ty was knocked out of the race in an earlier crash. Kyle Busch took the third after winning last week at Bristol. Kyle Larson was able to salvage a top 5 finish securing 4th despite the chaotic finish. Martin Truex Jr. rounded out the top 5.

The 6th-10th place finishers in order were Erik Jones, who led most of the race's late laps. Chase Elliot, Michael McDowell, Alex Bowman and Kevin Harvick filled out the top 10. Next up, the Cup Series rolls onto Delaware to run the Dover Motor Speedway Sunday at 3 PM.