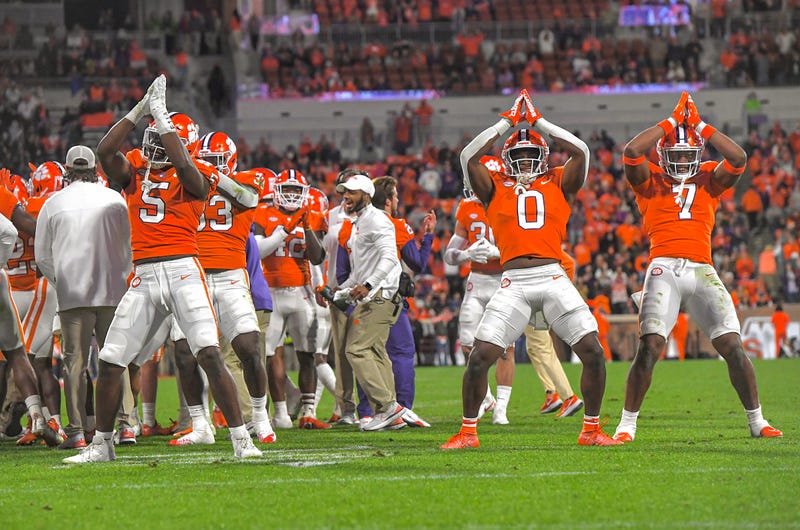 Clemson produced a balanced attack on offense with 207 total rushing yards and 240 total passing yards for 447 total yards. DJ Uiagalelei proved to be a dual threat, as he led Clemson in rushing with 89 yards and threw for 227 yards. Clemson spread the ball to 12 different receivers during the game. Clemson tallied 27 first downs to just six for Miami and converted on 14-of-19 third downs.

The Tigers started quickly, scoring touchdowns on their first two possessions and holding Miami without a first down in the first quarter. On the Tigers’ first offensive possession, Clemson went 75 yards on a 12-play scoring drive to take a 7-0 lead with 9:26 left in the first quarter as Uiagalelei hit Davis Allen for a seven-yard score. Uiagalelei then finished the next drive with an eight-yard rushing touchdown to give Clemson a 14-0 advantage.

Clemson’s defense continued the Tigers’ momentum as R.J. Mickens tipped Miami’s pass and Jalyn Phillips intercepted the ball to give Clemson the ball on the Miami 27-yard line. Clemson’s offense capitalized with Uiagalelei throwing a three-yard touchdown pass to wide-open senior Luke Price, the first receiving touchdown of his career. B.T. Potter secured another three points for Clemson with a 32-yard field goal, making the score 24-0 at the half. Clemson allowed just eight yards of offense and one first down in the first half and held the Canes to four three-and-outs in five possessions.

A Toriano Pride Jr. sack gave Clemson a 26-3 lead on a safety following a Clemson fumble deep in Miami territory. Miami scored its first touchdown of the night in the fourth quarter, making the score 26-10 with 13:45 left to play in the game.

A 49-yard catch-and-run by Jake Briningstool put Will Shipley in position to then run the ball from three yards out for his 13th rushing touchdown of the season and increase Clemson’s lead to 33-10.

On Miami’s ensuing possession, Trenton Simpson forced a Miami fumble and Tré Williams’ recovery gave Clemson the ball on Miami’s 36-yard line. Cade Klubnik then came in at quarterback and led another touchdown drive, with Kobe Pace punching one in to make the score 40-10 after the extra point.

The Clemson offense was productive, despite being minus 1 in the turnover margin. The Tigers turned it over 3 times to Miami's 2. However, Clemson gained nearly 450 yards of total offense. The Tiger offense was balanced, picking up 239 yards through the air and 209 on the ground. They also had a time of possession advantage of over 15 minutes.

Clemson will conclude the regular season next week in a sold-out contest at Memorial Stadium against rival South Carolina. That game is slated for a noon kickoff on ABC. Clemson will then face Coastal Division champion North Carolina in the 2022 ACC Championship Game in Charlotte, N.C. at 8 p.m. on Saturday, Dec. 3.