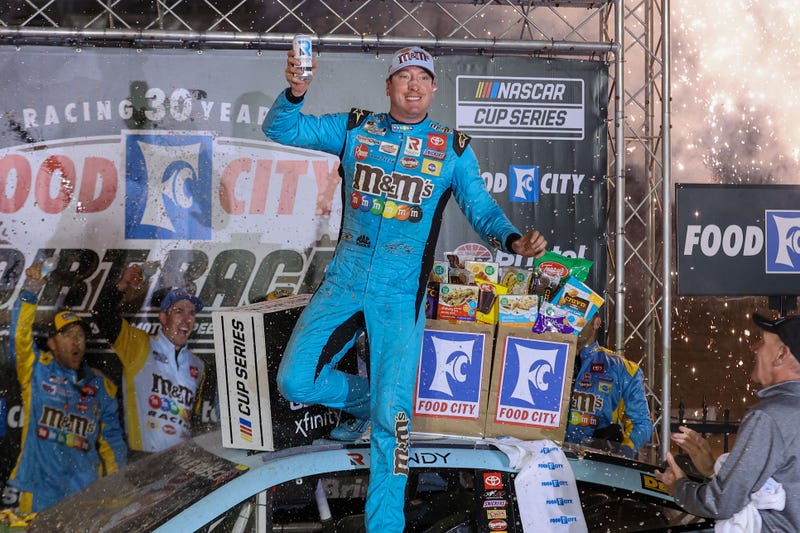 Kyle Busch capitalized on a last lap wreck to win the Food City Dirt Race at Bristol, Sunday night. Busch was running third when Chase Briscoe and Tyler Reddick got tangled up causing both to spin out. Busch navigated through the two cars, avoiding contact and taking the checkered flag.

It marked Busch's 1st win of the 2022 season and his 60th career victory in the Cup Series. He's now won at least one race in 18 consecutive seasons. That puts Busch in a tie for the all-time record with "The King" Richard Petty.

Sunday's run was the 2nd ever Cup Series race on dirt. As expected, the dirt surface was treacherous terrain for many drivers. There were a total of 14 cautions, with five coming after the first restart of the 3rd stage. The race also had two weather delays due to rain. The rain turned the dirt to mud, which clogged the grilles on cars to clog. A caution was called by NASCAR to have every driver pit to clean their grilles and windshields.

Drivers with dirt track backgrounds did expectedly well on Sunday night. Kyle Larson had a top 5 finish, with Chris Bell and Ty Dillon both finishing in the top 10. Tyler Reddick, Joey Logano, Kyle Larson and Ryan Blaney followed Busch in order. Alex Bowman , Chris Bell, Chase Elliott ,Michael McDowell, and Ty Dillon rounded out the top 10. Next up, is a super speedway run at Talladega as the Cup Series rolls into Alabama this weekend.