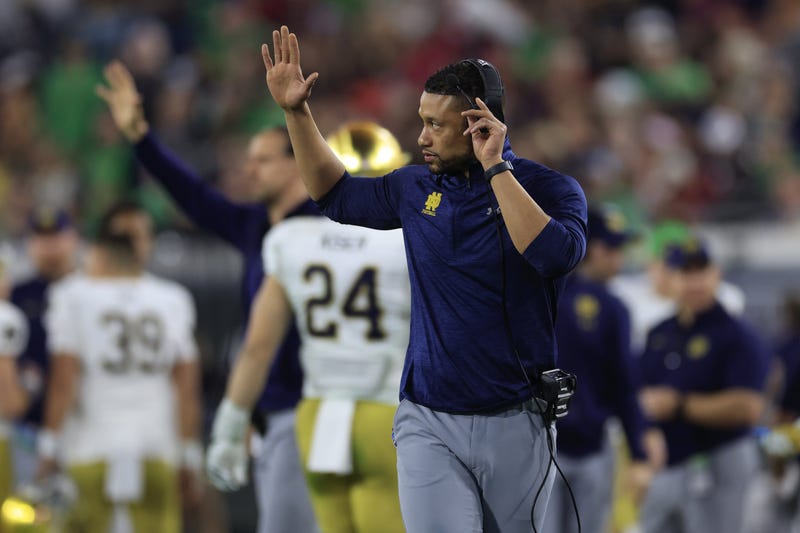 The Gamecocks bid for a postseason victory and their first 9 win season since 2017, fell just short when they failed to score on a late drive. Notre Dame got a stop and took the Gator Bowl 45-38. The win marks the 1st career bowl victory for their 1st year Head Coach Marcus Freeman. It also makes Freeman the 6th active black head coach to win a bowl game. (That number includes David Shaw as he was active this season but has now resigned from Stanford).

The Gamecocks started strong and led 21-7 after the first frame. South Carolina scored a TD on their opening drive, when QB Spencer Rattler found Xavier Legette from 13 yards out. A fumble by the Gamecock offense then gave Notre Dame the ball at midfield. The Irish cashed in scoring on a TD run by QB Tyler Buchner.

South Carolina would score on a trick play on special teams, when Punter Kai Kroger through a TD pass. That gave them a 14-7 lead and SC would get another score on a big play. DB DQ Smith came up with a 47 yard "pick 6" and the Gamecocks led 21-7 after the 1st.

The two teams traded field goals early in the 2nd quarter. Notre Dame then hit a big play in the passing game, as Buchner found Logan Diggs for a 75 yard scoring strike. That made it 24-17 South Carolina and they took that led into the half.

Notre Dame scored first in the 2nd half, when Buchner ran for another TD to tie it at 24. The Irish dominated the ground game, as South Carolina's run game struggled, like it has much of the year. Notre Dame ran for 264 yards and 3 TD's, South Carolina mustered just 65 yards on the ground. The two teams they traded touchdowns and were tied at 31 after the third.

Notre Dame scored early in the 4th to retake the lead on a nearly 40 yard TD run by Logan Diggs. That put them up 38-31, then South Carolina got another big play from its secondary. Gamecock DB O'Donell Fortune picked off a Buchner pass in the end zone and returned it 100 yards for a score, tying the game at 38 with under 8 minutes left.

Notre Dame then went on the game's longest drive both in terms of yards and time of possession. The Irish marched 80 yards in a drive that chewed up a little over 6 minutes. Buchner redeemed himself with a TD pass to Mitch Evans with 1:38 left. South Carolina picked up one 1st down on its last possession, however a sack and penalties did in the drive. The Gamecocks turned it over on downs and Notre Dame took a knee to seal the 45-38 win.

South Carolina is now 1-1 in bowl games under Head Coach Shane Beamer. They garnered late season momentum from consecutive wins over top 10 ranked opponents in Tennessee and Clemson. That momentum was stopped in the bowl loss. However, there is optimism surrounding the future of the program as Beamer and staff are putting together, a highly touted recruiting class that is set to come in. The Gamecocks class features 4 of the top 5 prospects (per 247 Sports) in the state for the 2023 class.