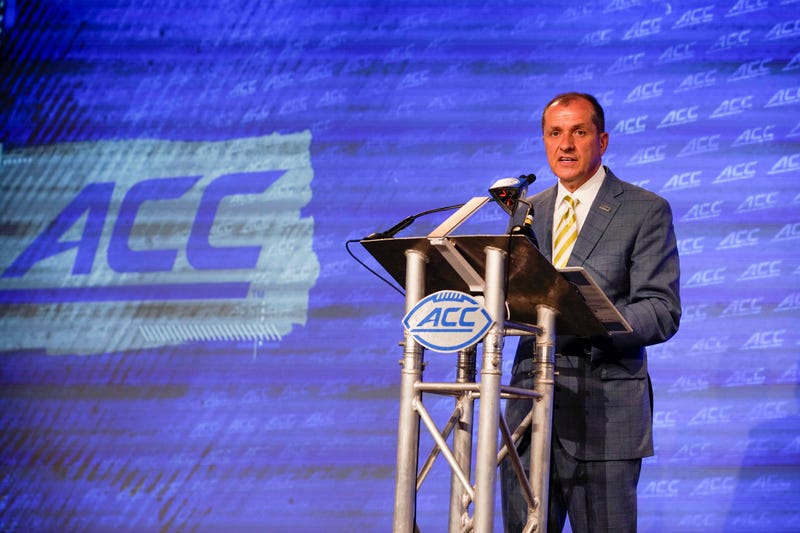 The age-old debate pitting conferences against the other for argument's sake has been dead for years now.

There's no more debating -- even more so after last year's announcement that Big 12 powerhouses Oklahoma and Texas were making the switch to the SEC. The Big 10 joined the conference expansion party most recently, adding Pac-12 sides Southern California and UCLA to the fold.

With three years of the past eight containing National Championship winning teams -- second to only the SEC in that timeframe (Ohio St. is sole winner outside of SEC, ACC, since 2005) -- why has the ACC been metaphorically dusted by the rest of college football's major powers?

As does everything else in this sport, it all starts with money. Naturally, that's where most of the opening questions directed towards Commissioner Jim Phillips at the 2022 ACC Kickoff drifted. When it wasn't about the potential of adding other teams, and how loyal the current set of teams planned to be -- Phillips talked about money.

When asked about how far behind the ACC is, Phillips referenced the SEC and the Big 10 while adding, "We all understand where those two leagues are (at)... We're all trying to close the gap,"

“I would think that the significance of what that would mean, (ending) the television rights that the conference owns, as well as a nine-figure financial penalty; I think it holds, but your guess is as good as mine.”

As is the way of the sport Phillips represented today, you could be closing the gap on another big-time program in terms of talent and recruiting, but that same game of catch-up isn't as linear off the field when the money distribution is as widespread as currently stands.

The Big 10's new media deal is rapidly approaching, and the SEC's freshly inked deal with ESPN begins in only two seasons... and the ACC's grant of rights keeps them locked into their current revenue sharing threshold until 2034.

Do you remember where this sport was 12 years ago?

Cam Newton was prepping for his first fall camp with Auburn, Nick Saban was preparing to defend his first title as Alabama's head coach, and Florida was only two years removed from their most recent national title win.

Life comes at you fast in College Football, and the ACC can't afford to wait another 12 years and allow its teams, especially at the bottom half of the conference, to drown financially compared to the competition. It affects recruiting heavily and puts the have-nots in a box they'll never get out of -- relying on conference money while rarely being able to put a product on the field worthy enough of elite booster investment.

The programs that produce the best will inherently perform best in NIL situations, where the deepest pockets win in a completely unregulated market for the now-year-old Name, Image, and Likeness rule.

"Fair regulation of recruiting is essential for fair competition," Phillips added Wednesday morning. "We all know NIL has upended recruiting, a result no one desired when it came into effect last July. How did it happen? NIL rules differ from state to state. Regulation is nonexistent. Enforcement of the rules is incredibly challenging."

There are a lot of unanswered questions, even after the endless hypothetical onslaught was released by the media onto all of the coaches, players, and commissioner himself.

Until NIL and Transfer Portal mayhem has a uniform set of guidelines, all the ACC can do is focus on how to generate more revenue for their football teams in less than 12 years' time to try and avoid an insurmountable gap formed between themselves and the two clear-cut top dogs in the SEC and Big 10, with the deepest pockets on hand top to bottom.