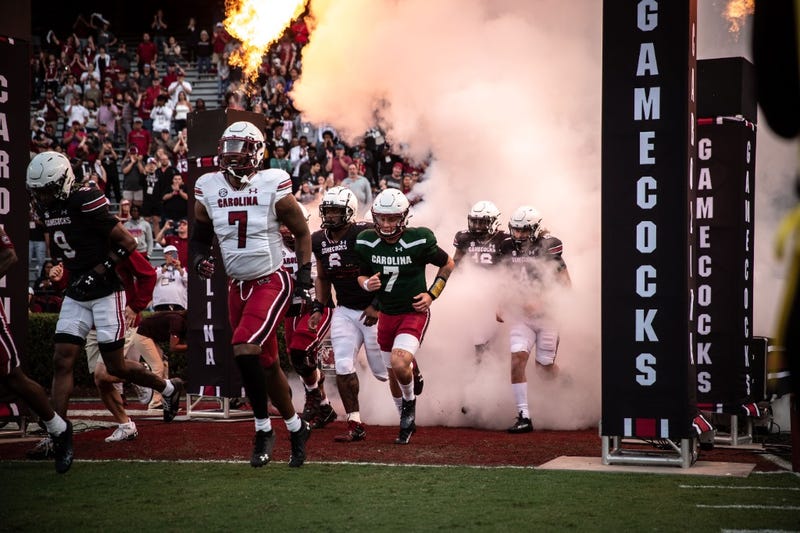 South Carolina's ace in the hole has always been the loyalty of their fanbase.

Those same fans are now hoping Spencer Rattler can be theirs, and eight completions was all it took to start solidifying those hopes; while hoping has never seemed to do much good in Columbia.

With head coach Shane Beamer's meteoric rise in the eyes of the fans coordinating alongside a potential star quarterback arrival in Rattler, maybe that's all about to change.

Eight Passes Was All It Took

South Carolina has been missing the energy Rattler has when he plays the quarterback position since Connor Shaw and Dylan Thompson were on campus. "That was an environment i've never seen before in a spring game," Rattler said postgame, and every one of those announced 20,671 fans in attendance showed how excited they were for some new blood under center.

After a fake wheel-turned slant route that saw Rattler throw behind his receiver early in the first quarter with pressure in his face, there was only one other incompletion to be seen from him all night; and it was a dropped swing pass.

A 30-yard completion to seemingly one of Rattler's favorite targets already, wide receiver Xavier Leggette, was one of a few passes that showed the downfield ability; Rattler also found a 16-yard completion on 3rd and 18 to Antwane Wells Jr. with a free rusher running at his face. Wells Jr. tiptoed the sideline to stay in and the Garnet were able to convert on a short 4th down attempt right after.

The four sacks taken by the quarterback were a tad misleading as Rattler was not afraid to attempt getting out of the pocket, and the normal spring game rule not allowing quarterbacks to be tackled contributed more to sacks taken than Rattler not being elusive enough or his offensive line not doing their job correctly.

While both offenses were run-heavy as expected, Rattler never had to do a lot in the spring game to prove to the media and fans alike what he was capable of. Accuracy stood out, especially compared to some of the tapes where Rattler was still at Oklahoma, but eight completions is a small sample size.

Regardless, South Carolina hasn't had this kind of potential talent at quarterback in years -- that much is obvious already. With an entire offensive line returning in front of him and a loaded running back room spearheaded by Marshawn Lloyd, Rattler has all the tools to be wildly successful in year one with the Gamecocks.

Running Back Room Could be Elite

For starters, Lloyd looks like the real deal. After injuring his ACL in his 2020 freshman season, Lloyd was South Carolina's fourth-leading rusher last year while working his way back from injury behind Kevin Harris in 2021. The former five-star recruit out of Maryland now sees this as his job to lose and he played as such on Saturday night.

An early game 4th and 2 showed the biggest "wow" play of the night for Lloyd, as a linebacker ran completely free through the B gap and made contact as soon as Lloyd had received the handoff. Lloyd proceeded to make a quick spin, avoid the tackle entirely and got to the second level with ease for the first down. Easily turned a four-yard loss into almost a ten-yard gain.

Lloyd finished the game with eight carries for 42 yards and was far from the only Carolina back to stand out.

Sophomore Juju McDowell made his case as the second-best running back on the roster, finishing the game with six carries for 57 yards, 46 of which came on four first-half carries. Christian Beal-Smith has been thought to be RB2, but nobody is going to make it easy as Beal-Smith ended with just 18 yards on the ground. Even Rashad Amos and D.J. Twitty pushed their case onto Beamer, finishing with 30 and 41 yards, respectively.

The aforementioned 30-yard completion from Rattler to Legette was only made possible by selling the play-action fake, and play action is where South Carolina can find their big chunk gains in 2022.

If Rattler doesn't have to work harder due to a constant ability to rotate four or five running backs in and out without much drop-off, South Carolina and offensive coordinator Marcus Satterfield will reap the rewards and reap them often on offense in 2022.

Will Talent Improvement Translate to Wins?

South Carolina will be tested and tested early in September and it's hard not to try and overreact to spring game results because of it; traveling to Arkansas in week two followed by Georgia at home right after will give us our best measuring stick for what to expect in the other nine games.

The Gamecocks will have the offense to compete with anyone it seems if Satterfield doesn't hold the team back from a play-calling perspective, as the offensive line, quarterback, running backs, and receivers are some of the deepest groups on the whole roster. The SEC is just unforgiving.

The defense made a monster jump in production last season, as well; South Carolina improved from 109th in defensive efficiency to 34th between the 2020 and 2021 seasons during defensive coordinator Clayton White's first season.

All of the cards are lining up for Beamer and company to take a massive jump in just his second season as head coach, but talent doesn't always translate to wins.

Beamer now has a quarterback that can run his offense at a high level and a defense that can keep them in games consistently, but their conference conjoined with the rival they must face at the end of every season doesn't stack up for a favorable win total. Until a South Carolina head coach proves they can beat teams like Florida, Tennessee, and Kentucky consistently it's impossible to predict where this team will finish, but even finishing with seven wins and grabbing an eighth in a bowl game could be seen as a victory for this team.

Win some of those swing games early in the season, and the outlook could flip before September is even over for a South Carolina team that's hard to say whether they could grab just six victories or come close to finishing with double-digit wins. There's so much room for error, as well as success, and now it's time for Beamer to prove what he's made of.