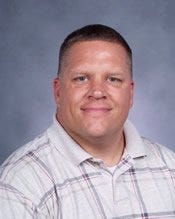 Brynes High School has named their new athletic director. Dr. Russell Howard has been introduced as the Rebels New AD. The Spartanburg School District 5 Board Of Trustees voted unanimously to approve his hire.

Dr. Howard arrived at Byrnes in 1993 and has spent over 25 years at the school. He also served as the AD at Greenville High from 2006-2008. Howard has served as the Head Coach for the Byrnes Wrestling program and as the O-line Coach for Byrnes Football.

He earned his undergrad degree from Wofford, his masters from Converse College in Spartanburg and his Sports Management doctorate from the U.S. Sports Academy. Howard is set to officially take over his new role this summer.