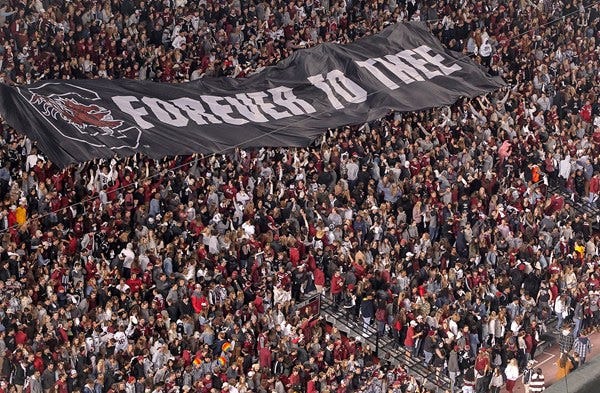 The contest will be the first ever played on the gridiron between the two schools that share the nickname "Gamecocks." Currently a member of the ASUN Conference, Jacksonville State will transition all sports into Conference USA in the summer of 2023. With the new conference home, JSU will make the jump to the Football Bowl Subdivision (FBS). It will end a run in the Football Championship Subdivision (FCS) that started in 1995 and has seen the Gamecocks win nine conference championships and advance to the playoffs 10 times, including a national runner-up finish in 2015.

The move will cause South Carolina's 2023 strength of schedule to dip. Liberty has been a D-1 FBS member in modern history. Their latest 3 seasons is one of the best stretches their program has seen at any point and specifically since becoming FBS. Liberty is 68-43 in the last three season which coincides with their hiring of controversial, yet successful former Ole Miss Coach Hugh Freeze. Liberty has won at least 8 games each season under Freeze's direction, including a 10-1 finish in 2020.

As noted above, JSU will join the FBS level next season, but is still currently an FCS level opponent. In the last three seasons JSU is 21-15. They were 5-6 in 2021, but had a strong 2020 campaign finishing 10-3, they were 6-5 in 2019. JSU has two wins in the last 3 seasons over FBS foes, the biggest of which was their shocking upset of Florida State this past season.