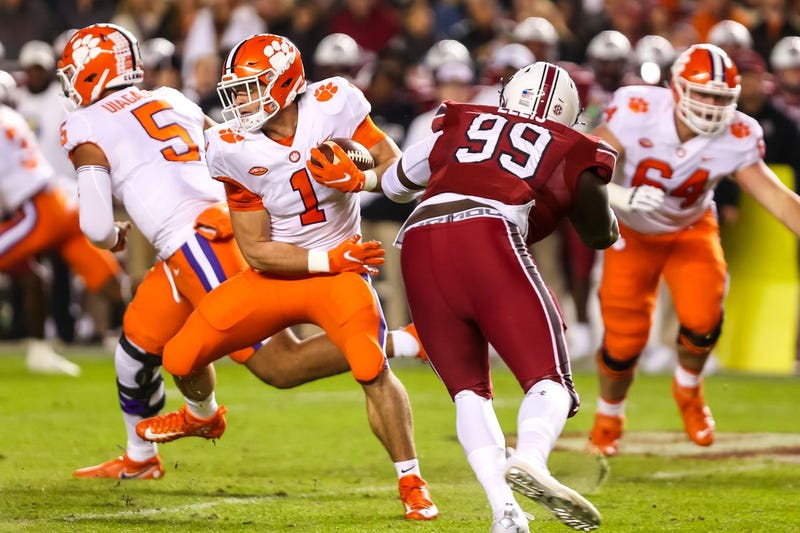 Clemson and South Carolina have been playing each other since 1896. On Saturday, they will renew the well over century old rivalry. Being a native of the Upstate, I grew up seeing this rivalry up close. It is the epitome of the "house divided" concept, where families are split with their loyalty. Even in some cases marriages are split in what side they fall on.

There is a feeling of intrigue surrounding the Palmetto Bowl this week. Just a few weeks ago, it looked pretty clear how this year's edition of the rivalry game would go. However, South Carolina has injected some interest and added some wonder to this one, by dismantling Tennessee last week, 63-38.

South Carolina is 7-4 this year and up until the Tennessee game, it didn't look like they were going to take a step forward in year 2 under Shane Beamer. But now, the Gamecocks have an opportunity to win 8 games in the regular season for the 1st time since 2013. That season was coincidentally the last time that the Gamecocks beat Clemson.

Clemson is 10-1 and still has an outside shot at the College Football Playoffs. They have to beat South Carolina and North Carolina December 3rd in the ACC Title Game and will need some help in front of them, as they come in at #8 in the playoff rankings.

Historically , Clemson owns a large advantage in the rivalry. The Tigers are 72-42-4 all time in the Palmetto Bowl Series. In recent years, Clemson has dominated South Carolina, winning 7 straight. In that 7 game series win streak, the only time South Carolina has been within 10 points was 2015, when Clemson won 37-32. The current 7 game streak matches the longest win streak in the rivalry, in which Clemson won 7 straight from 1934 through 1940.

South Carolina controlled for 5 years the rivalry under Steve Spurrier. They won 5 straight from 2009 through 2013. That is the longest win streak for South Carolina in series history. Clemson has won 13 of the last 20 meeting and 6 of 7 from 2002 through 2008, prior to South Carolina taking control of the rivalry for that 5 year stretch.

Clemson has won their last 2 games after a road loss to Notre Dame. They own a 40 game home winning streak. That is the longest current home win streak in the nation and is tied for the 9th longest home winning streak in college football history. Clemson has won 10 or more for 12 straight seasons something that only Alabama and FSU has done before.

While the 8 win mark would be a nice milestone for South Carolina, a win is even bigger than that. It would mean, they would turn the momentum in the series and would not only spoil Clemson's playoff hopes, but it would end Clemson's streak of 40 straight at Death Valley.

The two teams will renew the rivalry Saturday with kickoff slated for Noon.