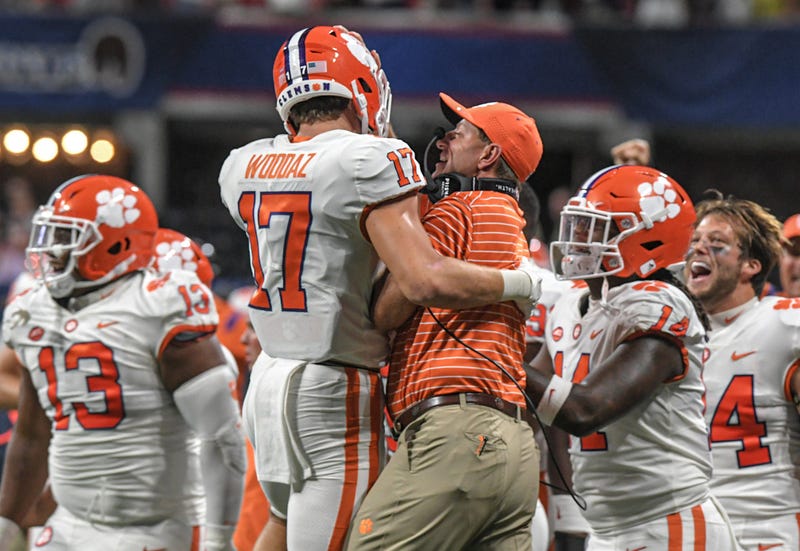 Clemson’s defense registered seven tackles for loss and allowed just 237 yards as the Tigers won their season-opener, 41-10, over Georgia Tech at Mercedes-Benz Stadium on Labor Day. Quarterback DJ Uiagalelei was 19-for-32 for 209 total yards and a touchdown through the air and on the ground. 12 of DJ's 19 completions came in the 2nd half. Clemson ran for a total of 127 yards, capped by a pair of touchdowns from sophomore Will Shipley.

The Tigers have now won each of their last eight conference openers since 2015, the longest conference-opener winning streak in school history. Coach Dabo Swinney said “Every championship team we’ve had since I’ve been here, we’ve won the opener. So it’s a big night for us."

Clemson’s defense made an impact on the game’s first play from scrimmage, as pressure from defensive end K.J. Henry resulted in safety Andrew Mukuba’s first career interception. Henry harassed Georgia Tech quarterback Jeff Sims for most of the game and finished the contest with 7 tackles, 2.5 tackles for loss, a sack and a forced fumble.

After a scoreless first quarter, Clemson’s special teams made a momentum-changing play early in the second quarter, with safety Carson Donnelly blocking a punt that was returned by Brannon Spector to the Georgia Tech 5-yard line. Clemson opened the scoring on the ensuing possession on a one-yard touchdown run by running back Will Shipley.

Clemson’s defense followed the touchdown with a three-and-out, and on Clemson’s next possession, Clemson drove 67 yards in eight plays and extended the lead on a six-yard touchdown pass from quarterback DJ Uiagalelei to wide receiver Beaux Collins. Clemson would carry a 14-3 lead into halftime.

Georgia Tech struck back on their first possession in the third quarter, drawing to within four on a 13-yard touchdown pass by Sims to EJ Jenkins. The Tiger offense provided a quick answer to take a 17-10 lead, as B.T. Potter hit a 29-yard field goal with 5:41 to play in the third quarter, capping a 12-play, 63-yard drive.

After the defense forced another punt, Uiagalelei kept a drive alive on 3rd and 2, avoiding a sack and finding Shipley in the backfield, who took it ten yards for a first down. Uiagalelei then hit his next three passes for 16 yards to Davis Allen, seven yards to Antonio Williams, and found Williams again for 16 yards to bring Clemson into the red zone, and scored three plays later on a quarterback draw, capping a 9-play, 76-yard drive with a 9-yard touchdown run with 1:18 to play in the third quarter.

Clemson’s defense forced Georgia Tech to turn the ball over on downs, and Uiagalelei led the Tigers 26 yards down the field. Potter extends Clemson’s lead to 27-10 with a 31-yard field goal midway through the fourth quarter.

Following another defensive stand by Clemson, freshman Wade Woodaz came up with Clemson’s second blocked punt of the night with LaVonta Bentley recovering the ball and taking it 10 yards to Georgia Tech’s 15-yard line, giving Clemson two blocked punts in a game for the first time since 2007 against South Carolina. The Tigers capitalized as Shipley earned another rushing touchdown with a 3-yard run, making the score 34-10.

True freshman quarterback Cade Klubnik made his collegiate debut with roughly five minutes left in the game. He led Clemson 66 yards down the field and found Will Taylor in the end zone for a three-yard touchdown pass, pushing the final margin to 41-10.

Both Clemson and South Carolina had two blocked punts in Week 1, which is a new combined record for the two schools in season openers. The Tigers scored 27 unanswered after Georgia Tech opened the 2nd half with a TD drive to make the score 14-10, Clemson. The Tiger defense lived up to its billing allowing just 13 1st downs, 237 total yards, 73 rushing and held GT to 2 of 16 on 3rd down conversion attempts.

Clemson’s next game action will come on Saturday, Sept. 10 when the Tigers host their home opener against the Furman Paladins. That game, which has been designated as First Responders Day, will kick off at 3:30 PM. You can hear that one and every Furman game all season long on The Fan Upstate.