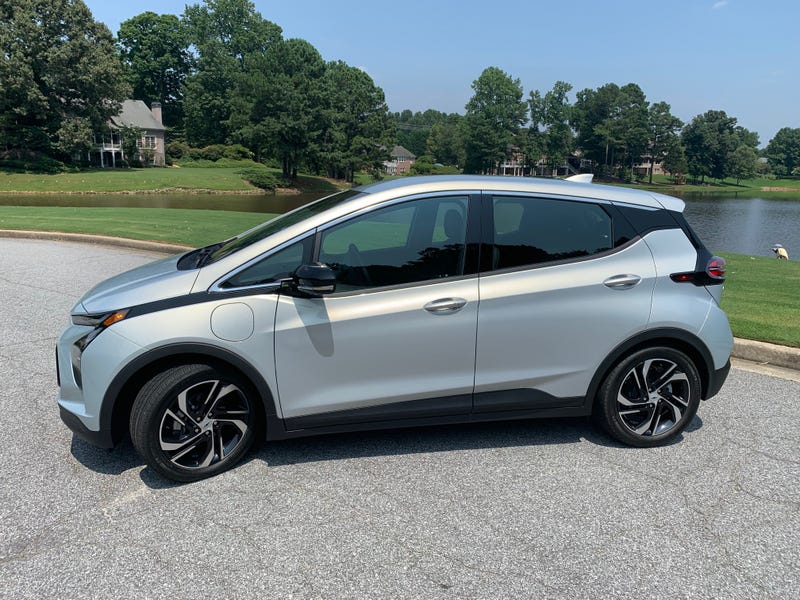 So…thinking about “Taking the Plunge”, are you?

After 2030 or 2035, almost every manufacturer…here and in Europe…has come out and said “We’ll be all electric by then”.

So…are you finally thinking about it?

If so, you might be aware that you’ve got quite a few choices these days…with many more on the way….and many of these new choices are landing right in the mid $30’s…a far cry from some of those six-figure vehicles that we’ve all heard about.

Among your growing list of choices, Chevy’s Bolt has been around long enough to be considered a veteran by now…but the ’22 Bolt is a freshened and updated version of the original.

So what does a roughly 35 thousand dollar window sticker get you these days when you’re looking at going electric?

Let’s start with a 259 mile range and a 0-60 time of 6.5 seconds.   I mention that acceleration because one thing that you’ve gotta’ know is that “electric” doesn’t mean slow.   Floor it and the Bolt will push you back in your seat…just like an old V-8 used to do…but with much less noise.

In fact, the silence is one of the things that you’ll need to get used to, as pedestrians just won’t hear you coming.   But then, like most vehicles today, Chevy’s ’22 Bolt comes with “Safety Assist”…which brings the now usual array of alerts and warnings of all sorts.   Pedestrians may not hear you coming, but your Bolt will see them and will automatically stop you if you don’t take action.

So let’s go back to that 259 mile range, OK?   I “topped off” my Bolt each night…plugging it into a standard 120 Volt wall outlet while utility rates are lower and added around 25 – 30 miles of range depending upon how early I started the next day.

But for heavier users, Chevy has a limited time offer where they’ll install a 240 volt charger at your home for free.   That’s a really appealing offer, and that’ll give you around 25 miles for every hour you’re plugged in…allowing you to start each day with somewhere around Chevy’s claimed 259 miles of range.

“But what if I don’t have a garage”, you ask?    There’s roughly 40,000 electric vehicle charging stations around America right now today…with far more on the way.   Some are at retail locations, and will give you a free charge in return for your shopping there…others will cost you a few bucks.   But know that the EPA rates Chevy’s ’22 Bolt at an equivalent 131 MPG in city use and 109 on the road.