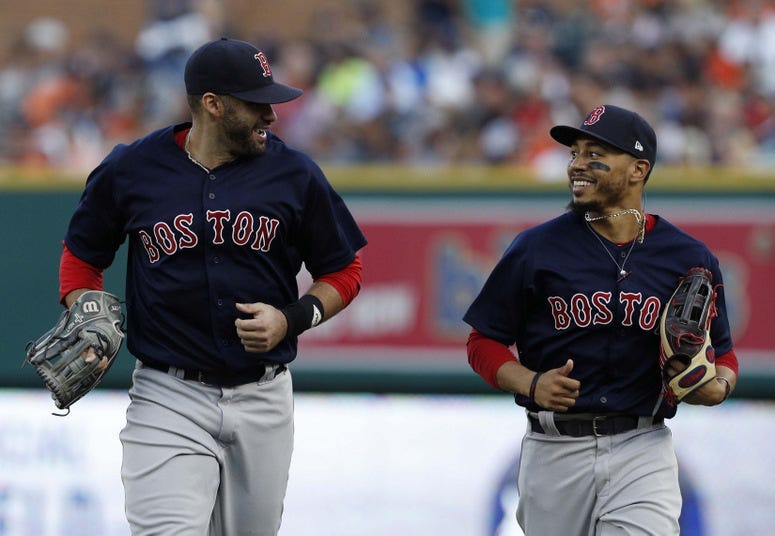 One was drafted as a second baseman but considered too small ever to hit for power in the big leagues. Maybe he'd find the gaps, steal some bases, and carve out a steady career.

The other lasted until the 20th round in 2009, got cut five years later, and even after blossoming into an All-Star slugger, still couldn't find anyone willing to pay him until spring training had already started this February.

Together they arrived in Fort Myers as the expected linchpins of the Red Sox lineup.

But no one expected this.

With the final month upon us and the postseason beckoning, Mookie Betts and J.D. Martinez find themselves locked in a friendly struggle for one of the biggest individual honors in baseball.

Not only are they the two best players on baseball's best team, they're also two of the favorites to claim the American League MVP award, and you can count on one hand the number of times the Red Sox could legitimately say that.

Only five times in history have two Red Sox finished among the top three in AL MVP voting. Dustin Pedroia (1st) and Kevin Youkilis (3rd) were the last two to turn the trick a decade ago. Before that, you'd have to rewind to Roger Clemens and Jim Rice in 1986, or the Gold Dust Twins of Rice and Fred Lynn in 1975. Ted Williams turned the trick twice in the 1940s, first with Johnny Pesky in 1942 (they finished 2nd and 3rd) and then when winning the award to Bobby Doerr's third in 1946.

Now, however, not only can Betts and Martinez both make a compelling case to claim the hardware, it wouldn't be a shock if they finished 1-2.

"I think we have two of the top three guys in the MVP voting on our team," starter David Price told reporters recently.  "That's huge."

It also makes the Red Sox a potential rarity. Not since the Tigers battery of Denny McClain and Bill Freehan in 1968 have teammates taken the top two spots in the MVP voting. Maybe that changes this year as the Red Sox try to make history in more ways than one.

The performances of Betts and Martinez are lifting everyone around them.

"My motivation is the team that we have and trying to be as good as all the other guys on here," said shortstop Xander Bogaerts. "You don't want to stay back. I mean, we've got a couple guys who could be MVP on our team, hopefully. That's in the conversation and you don't want to be too far behind them."

So here's the question that will soon vex AL MVP voters: How do you choose one over the other?

THE CASE FOR BETTS

He led the league in hitting, at one point in July pushing his average to .362. Add exceptional power -- 27 homers in his first 96 games -- as well as Gold Glove defense and maybe the first 30-30 season of his career, and you have one of baseball's most complete players.

"With Mookie, what can I can tell you?" manager Alex Cora said around the All-Star break. "We're very proud of the way he's doing things. We're very proud of the way he's handling things. He's becoming a weapon at the top of our lineup. He understands that people are going to make adjustments against him, but he's still with the approach we want him to have. That doesn't mean he's going to swing at the pitch every time, but he's ready to do damage from pitch one. He's a good defensive player. He can steal bases, and we're very pleased with the way he's played."

Betts has delivered some of the signature moments of the season, be it the 13-pitch at-bat ending in a grand slam vs. Blue Jays left-hander J.A. Happ -- broadcaster Dennis Eckersley could only yell, "Yeahhh!" as the ball sailed out of the park -- or the walkoff homer over the Monster to beat the Twins in July.

Betts' flair for the dramatic shouldn't mask his consistency, however. He has spent the entire season in the leadoff spot, because Cora deemed stability there paramount. Before August even ended, he had already topped 100 runs and 26 steals for the third straight season, even logging a couple of innings at second base after injuries left the team thin for an evening.

He's hitting the ball out to all parts of the field, the gap power of his minor league days replaced by legitimate big league thunder that he credits in part to Martinez.

"Now I feel like if I hit it pretty good, it can go out anywhere," Betts said. "Just working on my swing with Timmy (Hyers) and J.D. and those guys, getting me in the understanding of how the swing works and what produces the power. I guess just the swing plane. I'm strong. I'm strong enough to do it, it's just getting on the swing plane and hitting it really well."

Martinez breaks down Betts' growth with pride, particularly as he dispels a commonly held myth in baseball that undersized players can't generate loft.

"I don't believe in that," Martinez said. "There are a lot of other people that would argue that, but for me and what I believe is if you're hitting the baseball the right way and you're generating as much power -- I mean, what's he hit the ball, 98 mph? If you can hit a ball at 98 mph with the right angle it's going to be a home run.

"So I told him, 'There's no reason you can't do it.' And he's like, 'Yeah, I don't hit the ball as hard as you do.' I said, 'Mookie, if you can't hit the ball 100 mph then you shouldn't be here.' Because it's the truth. And he's like, 'I never thought of it that way.' That's what he does. He makes good contact, makes solid contact, and I think his mind is in the right place now where he's kind of lining up and kind of understanding the swing and the mechanics behind it to be able to drive the ball that way better."

Betts has hit the ball so hard, it would seemingly preclude the possibility of Martinez walking home with his first MVP award.

But the baseball season is long, and Martinez is a monster.

THE CASE FOR MARTINEZ

Martinez entered September with a chance to lead the league in homers and RBIs while hitting over .330. Betts may deny Martinez the Triple Crown, but that doesn't mean he can stop him from joining a select group of hitters.

Since 1970, the same batter has led the AL in homers and RBIs 19 times (Alex Rodriguez, Cecil Fielder, and Rice did it twice). Only five times did that player also finish in the top 10 in batting. The most recent, of course, was Tigers star Miguel Cabrera, who became baseball's first Triple Crown winner in 45 years when his .330-44-139 led the AL en route to an MVP in 2012.

If Martinez leads in homers and RBIs and finishes with an average above .330, he'd be the first hitter to turn that trick since Mickey Mantle won the Triple Crown in 1956 with a .353-52-170 season.

That's pretty crazy company, but it only begins to tell the story of Martinez's impact on the 2018 Red Sox.

"He makes everybody better not just by being in the box, but by making the hitters before him better," Price said. "It's pregame, it's with his preparation, it's what he does in hitter's meetings. When he speaks, those guys listen. I don't know. I really think Mookie Betts will win MVP of all of baseball and JD should win MVP for the Red Sox because of what he's brought to this team. It's not just the homers, the average, the RBIs -- he makes everybody better."

For his part, Martinez doesn't fixate on awards. He has dismissed MVP questions all season like an umpire tossing a scuffed baseball out of play.

"I don't care about that," Martinez said. "You guys know how I am and the way I answer all those questions. We're worried about tomorrow, that's it. We're worried about tomorrow and the next day and what we need to do to win. Those are all kind of stuff you think about when the season is over. Right now we're on a mission and that's to keep doing what we're doing and win a World Series."

Martinez's arrival restored a natural order to the lineup that had been missing since David Ortiz's retirement in 2016. From Mo Vaughn to Manny Ramirez to Ortiz, the Red Sox were blessed with middle-of-the-order beasts for more than two decades.

Martinez continues that tradition, but he might also be the most complete hitter in the game, with a .340-40-140 season a distinct possibility.

From an MVP perspective, that's hard to overlook.

"In an era where guys hit .210 with 40 and drive in 75, I know teams will take that because of the production and damage," Cora said. "But for him to do damage and also be that type of hitter is pretty impressive. . . . He's not just a power hitter. He's a complete hitter."

Martinez's contributions extend beyond the field, as Price intimated. He might be the most conscientious student of hitting in baseball, with an iPad featuring video of every swing, from batting practice to games. He has sold his younger teammates on the importance of film study and preparation. Beyond that, the bilingual star can also bridge clubhouse divides between Latin and American players.

"He's special," Bradley said. "I say this every single time I talk about him, he's not only a special player, he's a great teammate and great leader. The way he prepares each and every day, everybody can learn from. He's crazy about the game. He's producing like this because he's not only good at the game but he takes the time."

On Labor Day morning, Martinez found himself hitting .337 with 39 homers and 115 RBIs. He leads the league in RBIs, and is second in homers and average. He trails Betts by three points in the batting race and Oakland's Khris Davis by one home run. Could a player win a Triple Crown and not an MVP? (The answer is yes, because it happened to Ted Williams twice!) It may be that all that stands between Martinez and that award is his teammate with sights on a batting title.

"I would love him to win the Triple Crown, but if he wins the batting title, that means the other guy got into a slump, so, I mean, I like the way it is now honestly," Cora said last month. "It is impressive. I saw the numbers (recently) compared to Miguel when Miggy won the Triple Crown. It's not even close. Miggy was a monster that year. I don't know. I mentioned it in spring training and people were laughing at me, he's the closest thing to Manny (Ramirez) as far as hitting for average, hitting the ball out of the ballpark and driving in runs. At least he's making me look smart."

Maybe the Angels' Mike Trout or Oakland's Davis or Cleveland's Jose Ramirez will blow up in September and steal the award, but the way things stand now, it's looking a two-man race, and both of them play for the Red Sox.