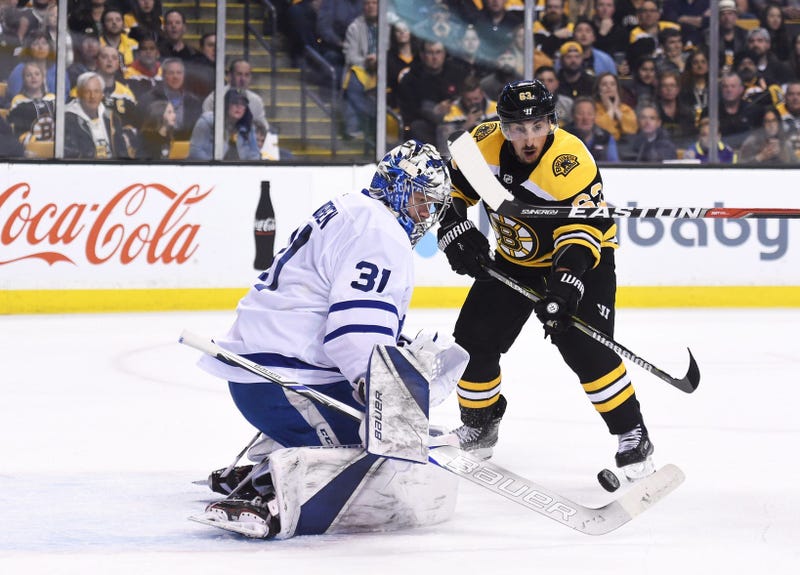 The Maple Leafs -- clinging on for dear life in the final 25 minutes of a 4-3 Game 5 final at TD Garden, and on the back of a series-best 42-save night from Frederik Andersen -- were just inches away from becoming truly haunted by the ghosts of their past.

The Stay-Puft Marshmallow Man? Vigo the Carpathian? Please, mere child’s play compared to the what seemed to be increasingly real possibility of the Leafs losing by way of another three-goal lead blown in an elimination game on TD Garden ice.

Jake DeBrusk, Matt Grzelcyk, David Pastrnak, and even Zdeno Chara had their looks. One of Boston’s final looks -- off Chara’s stick -- was oddly reminiscent of Toronto’s previous postseason failure in town, too. Chara, out there as a now-unusual suspect of an extra attacker, looked off his passing options and glided towards the middle of the attacking blue. He found his angle and ripped a shot. But wide of Andersen, it went.

There was no center-ice celebration, nor was there a mad dash back into black and gold seating from those that left when the game was 4-1 and looked beyond finished.

But most of all, there was no much-needed elimination of those pesky Maple Leafs.

“The stuff that we’ve done lately: defend, get saves, that didn’t happen early on,” a blunt Bruins head coach Bruce Cassidy, whose team is now forced to play at least one more game while the Lightning rest after winning their Game 5, said after the loss. “We found our legs eventually and fought our way back in, but the start wasn’t good enough.”

And with the series now shifting back to Toronto for a momentum-swinging Game 6, it’s the Bruins that will find themselves in a position to fight off the ghosts of their past.

When we’ve scratched beyond the surface of the Bruins’ shortcomings in recent years, it tends to come back to a failure to close. Relevant or not, the Bruins choked their way out of a postseason spot in back-to-back seasons. Relevant or not, the Bruins allowed the Senators to claw back and truly take a hold of last year’s first-round series loss by way of a Game 2 collapse. This year’s team also failed to capture the East’s No. 1 seed when in complete control of their own destiny in the final week of the regular season.

These failures to close have also defined some of the Black and Gold’s top-tier talents in recent memory. In their last six games facing elimination or with the ability to eliminate the opposition, the B’s big three forward core of Patrice Bergeron, David Krejci, and Brad Marchand has now combined for one goal. In the same situation and sample size, Tuukka Rask has been iffy-at-best, with a 2-4 record and .890 save percentage.

The Bruins and this core, of course, failed to close on Saturday night.

The three-headed core up front combined for nothin’ on seven shots. Add Pastrnak, the undeniable star of this series, to the mix, and it’s zero goals on 17 shots. Add big deadline addition Rick Nash in and now you’re talking about nothin’ on 21 shots. In fact, Jake DeBrusk was the only member of Boston’s top six to factor in on any Boston goal on the night, picking up an assist on David Backes’ second-period power-play goal.

Rask, meanwhile, was given an early hook after surrendering four goals on 13 shots, flushing his fantastic Game 4 performance out of your memory faster than No. 40 could sprint down the hallway and back to the Boston dressing room upon his exit.

“Probably could’ve stopped more pucks with my eyes closed,” Rask, now 5-11 with an .895 save percentage in series-clinching games in his NHL career, offered up after the loss. “It’s on me, but moving on to the next one and we’ll finish it out in Toronto.”

Make no mistake about it, though -- everything was on their side heading into Saturday.

The Leafs were getting Nazem Kadri back, yes, but the B’s got Auston Matthews repellent (Bergeron) back in theirs. Mike Babcock had hit a true point of desperation and moved William Nylander to near-irrelevancy on his practice lines. Cassidy, meanwhile, was back in the comfort zone of his real life version of a ‘best lines’ button. And the Bruins were back in the building where they downright tortured the Leafs in Games 1 and 2, outscoring ‘em 12-to-4, and with a combined 20 points from the Bergeron line.

Pst, they also stole Game 4 and were undoubtedly going to find themselves benefitting from some hometown cookin’ after earning just one power-play chance in Games 3 and 4. (The Bruins finished Game 5 with six power-play chances, including a second-period stretch that saw them do absolutely nothing with 1:34 of a five-on-three advantage.)

And yet, you were instead given an agonizing teaser of what could have been.

You were also reminded of the perilous and often nauseating uncertainty that comes with an inability to finish on your chances -- for the second time this series; Boston set a season-high in shot attempts (90), possession (69.77 percent), scoring chances for (52), and also surrendered a season-low in scoring chances against, with just 19.

But successfully playing the role of Peter Venkman (though his haircut is more Gozer), Andersen has officially forced you to move on from the idea that 4-1 leads can be overcome should the game be played against the Leafs, in Boston, and meaningful.

“That’s in the past,” Kadri, one of five Leaf holdovers remaining from the 2013 team that epically collapsed, said. “I think it’s about time that we just turn the page on that one.”

Now at least one more -- or maybe even two, if required -- crack for the core of this Bruins team to turn the page and ultimately close the book on the ghosts haunting their library.