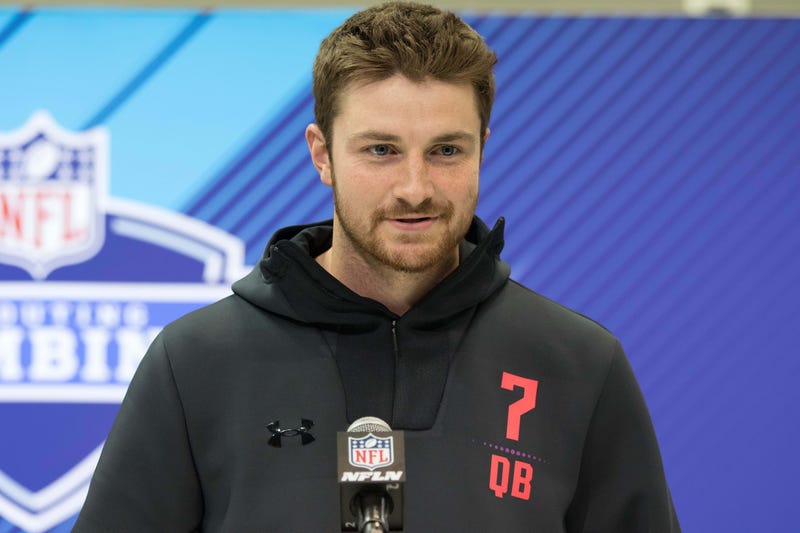 INDIANAPOLIS — Almost every quarterback at the NFL combine has followed Tom Brady’s career, but no one as intensely as Washington State quarterback Luke Falk.

Falk takes things to another level, as he models his entire game after the Patriots quarterback.

Despite being from Logan, Utah, his admiration for Brady began when he was in high school as he took Brady’s traits and implied them to himself in order to be the best quarterback he could be.

“Luke is driven and strives for perfection. Luke knows, and I think Tom Brady has been the greatest role model of that of anybody in the history of football,” Falk’s high school coach Mike Favero said recently. “Luke takes a very comprehensive approach to greatness, or trying to be excellent and perfect. He knows that it encompasses far more than just the game. He is trying to perfect the process, which includes comprehending things all the way from recovery to nutrition to mental toughness to strength-training to techniques, all of those things.”

Falk may be the best comparison to Brady in the entire draft class.

Standing 6-foot-4, the Washington State product completed 67 percent of his passes this past season for 3,593 yards with 30 touchdowns and 13 interceptions. Playing under Mike Leach, he was allowed to throw the ball a ton, which allowed him to become the Pac-12’s all-time passing leader. He isn’t that athletic, but neither is Brady.

All of his Washington State teammates were aware of his Brady obsession — although it wasn't hard to hide, as Falk constantly walked around campus wearing a TB12 hat.

“Oh my gosh, don’t get me started with that,” offensive lineman Cole Madison, who was also at the NFL combine, said. “Everything Tom Brady. ‘Tom Brady this, Tom Brady that. Tom Brady does this, so this is what we should do.’ He is ride or die Tom Brady, for sure.”

Added wide receiver Tavares Martin: “He loves Tom Brady. Everything single thing about him, every little detail about him.”

Falk was so obsessed, his teammates loved to poke at him when the Patriots and Brady had a bad game.

“Everyone looked forward to when the Patriots didn’t have a good game and everyone could look forward to going up to him and giving him crap about it,” Madison said. “It’s all in good fun, though.”

This past Super Bowl was the worst for Falk.

“After the Super Bowl, I was pretty heart-broken,” he said. “I got like 20 phone calls and they got under my skin a little bit.”

Falk has watched a ton of Brady tape over the course of his football career, but he also tries to emulate the Patriots quarterback off the field as well, which includes the amount of preparation it takes to perform well on game day.

“That kid with film, that is his middle name,” Madison said. “Some coaches have told him to tone it down with the film, that’s how much film he watches.

"Everything Tom Brady he models his game after.”

The Washington State product’s obsession with Brady even goes all the way to the TB12 Method.

“You know, I got the book,” he said. “I don’t know if I had quite the resources at the time, but I tried to dabble in it. I try to eat healthy and it’s pretty cool.”

New England is expected to select a quarterback in the draft with the hope he will one day be Brady’s successor. With that comes working and learning from Brady at least for a few years. Being in the same room with your childhood hero may be intimidating and possibly overwhelming for some, but not Falk.

“I just think wherever I land I will just try and get the most information that I can,” he said. “If I landed [in New England], I would just be a sponge with everything that he’s done. He is the greatest of all-time, there’s no doubt about it. It would be a really cool experience.”

Falk has been one of the few quarterbacks projected to go to New England, and if he does, he certainly would have a head start on most when it comes to learning from the greatest quarterback of all-time.