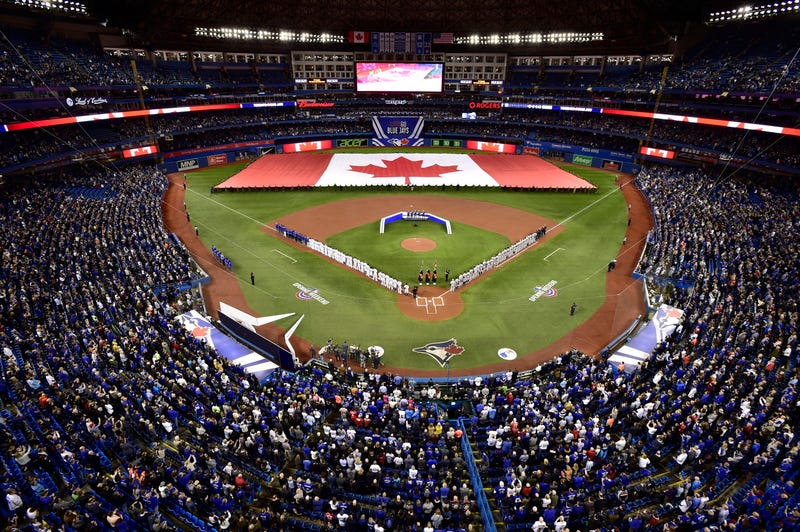 The fine folks in Toronto were ready.

Two-hundred and fifty members of the Canadian Armed Forces had already been summoned, charged with the responsibility of unfurling an outfield-sized Canadian flag just before the season's first pitch.

The Blue Jays planned to trot out in their new alternate uniforms, the same one each fan entering the ballpark would receive a replica of.

There was also going to be the honoring of Blue Jays legend Tony Fernandez, who had passed away in February.

And of course, the whole ball of wax was going to be headlined by these young stars the area gift shops were already making a fortune off of -- Vlad Guerrero Jr., Bo Bichette and Cavan Biggio -- all of whom were about to experience their first big league opener.

And on the mound would be Hyun-jin Ryu, the starting pitcher that represented the Blue Jays opening up their big boy checkbook for the first time in a few years thanks to a four-year, $80 million contract. Oh, and it was also going to be the return of Kevin Pillar!

All of the planning was geared toward when those gates opened to play the Red Sox on March 26, otherwise known as Opening Day, 2020.

For those in New England, Thursday was supposed to represent the season-opener for the Red Sox, getting to kick off the Chaim Bloom era with all of the aforementioned Canadian pomp and circumstance serving as their backdrop. Eduardo Rodriguez was going to get his big chance to serve the Opening Day starter. And Ron Roenicke would be making up his first big league Opening Day lineup since 2014 with bench coach Jerry Narron getting to do his calligraphy thing while writing in (best guess) ... Andrew Benintendi LF, Rafael Devers 3B, Xander Bogaerts SS, J.D. Martinez DH, Christian Vazquez C, Michael Chavis 1B, Pillar RF, Jose Peraza 2B, Jackie Bradley Jr.

Instead, we have seclusion with trips to the supermarket serving as our entertainment these days. Many of those who returned to Canada from spring training are still in self-quarantine. And even if any of us wanted to take a drive up to an empty Rogers Centre, we legally couldn't cross the border. It was all something we started seeing coming about two weeks ago, hence the canceled hotel rooms and future credit on Porter Airlines.

This isn't out of nowhere. But now that the day is here, it kind of seems like it was.

Supposed to be in Toronto right now ----. Wishing it was #OpeningDay tomorrow @BlueJays #imissit pic.twitter.com/X98en7PWLr

For whatever reason this one game on the schedule separates itself from the rest of the 161.

I remember sitting one seat in back of Theo Epstein at Tropicana Field the game Carl Crawford ruined his first day as a general manager with a closer-by-committee-induced walk-off homer. That sting wasn't as nearly as painful as the final loss of that 2003 season (courtesy Aaron Boone), but its memory will undoubtedly always stick with Theo.

Conversely, the Red Sox glee siphoned from their Opening Day win at Yankee Stadium in 2013 was a moment the likes of Jonny Gomes still point to as a message-sender.

Game 1 just sticks with you. Dwight Evans' home run on the very first pitch of the 1986 season. Alan Trammell spoiling Lee Smith's Red Sox debut with a 10th-inning game-winning home run at Fenway two years later. Or the short-lived giddiness found in the Seattle clubhouse last season after the Mariners handed the Red Sox and Chris Sale their lunch in the opener.

The idea isn't complicated. You try all offseason and spring training to convince that a team is this or that, and then for at least a few hours, you have some sort of definition. Right now, all of it seems so foreign.

It will now be months before we get to even think about this sort of stuff again, so take a few moments to soak in what might have been.

Bichette at shortstop, followed by Biggio (2B), Lourdes Gurriel Jr. (LF), Guerrero Jr. (3B), Travis Shaw (1B), Randall Grichuk (CF), Teoscar Hernandez (RF), Rowdy Tellez (DH) and Danny Jansen (C). How would Rodriguez navigate through this lineup? People would actually be caring that Tellez was 2-for-3 against E-Rod with two homers, or that the only time the lefty pitched at Rogers Centre in 2019 he allowed six runs over five innings.

Would Benintendi try and hit a home run on the first pitch he saw from Ryu like he admittedly when leading off in Seattle last year? Could the Red Sox solve the Blue Jays lefty like they managed to in Game 2 of the 2018 World Series, but failed to replicate when being held to two runs over seven innings at Fenway last July 14?

Soak it in while you can. Maybe put some bunting in the basement. Welcome to Opening Day, 2020, the day that never was.

news
Will you still need to wear masks at chains like Walmart and Target? This is where 15 major retailers stand
music
Tracee Ellis Ross responds to ‘Black-ish’ coming to an end next season: ‘It’s gonna be a good one!’
<div class="trending__it