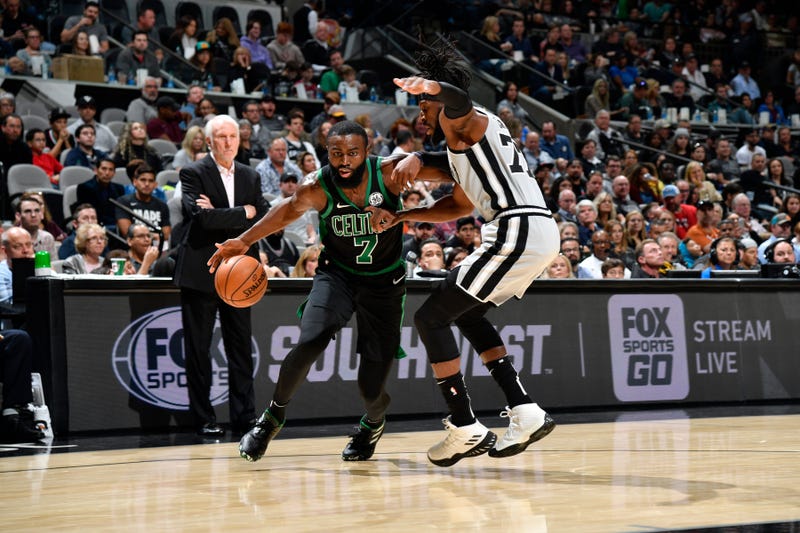 The Celtics are, unfortunately, venturing into familiar territory with Gordon Hayward sidelined. He suffered a left hand fracture against the Spurs on Saturday and is set to see a specialist. Brad Stevens said surgery may get him back on the floor quicker, but the timetable for his return won’t be established until he meets with the specialist.

This means the Celtics will likely be without Hayward for an extended period of time, again — though for a much shorter stint than when he fractured his ankle in 2017-18.

“This one doesn’t feel nearly as bad as it did two years ago,” Stevens told reporters in San Antonio. “He’ll be back. But he’ll be off for a few weeks, or a month, or whatever it is.”

In their first half of basketball without Hayward, the Celtics were able to outscore the Spurs 63-61, en route to a 135-115 win to close out the road trip a perfect 3-for-3. (For a complete recap of the Celtics' win, click here.)

With Hayward down, Marcus Smart slips into the starting lineup. Though, he doesn’t necessarily need to take on more responsibilities. The Celtics have already shown they can produce by leaning on two wings and Kemba Walker as their primary scorers, as long as they receive minor contributions from two or three other Celtics.

Jaylen Brown is the one who’ll need to make up for Hayward’s scoring, assuming Kemba Walker and Jayson Tatum remain consistent. And there shouldn’t be any doubt about whether or not Brown can fill Hayward’s shoes after Saturday’s game. Brown went off for 30 points on 55.6% shooting (10-for-18) and took advantage of his attempts at the free-throw line, finishing 9-for-10.

Jaylen handles and hesitates to the bucket! #Celtics pic.twitter.com/rNRk7WEVIa

“The points are going to come,” Brown said. “I think the playmaking, making sure we’re getting other people involved and stuff like that will make the game a little bit easier for us.”

On any given night, Tatum, Brown or Walker can easily be one of the team’s top scorers, as was the case when Hayward was in and Brown was out.

One issue becomes the reserves with Smart being inserted into the starting lineup. Stevens continues to rely on Robert Williams, Grant Williams and Smart, while sprinkling in Brad Wanamaker.

Based on what we saw in San Antonio, Javonte Green could get some time, as well. The wing has no problem getting to the rim and he helps maintain the Celtics’ switchability on the defensive end, though he still has plenty of room to grow on that end of the floor.

Now, don’t expect Green to play 20 minutes a night. Grant Williams will probably see an uptick in play. Wanamaker certainly will, as well. But Green is someone the Celtics can utilize when others need quick breaks.

Another thing all the Celtics will have to help with is rebounding. Hayward leads Boston with 7.1 rebounds per game. Brown had seven rebounds on Saturday and has to maintain that level of production. Robert Williams also grabbed seven rebounds to tie his season-high. He was averaging below five rebounds a game entering Saturday. The Celtics need him to build off his performance against the Spurs.

The most important thing for the Celtics throughout this stretch without Hayward: maintain their offensive tempo. Hayward’s slashing and ability to start the fast break so quickly have led to quick buckets when the Celtics are struggling to find their rhythm and when Boston is on a run and has a chance to overwhelm the opposition.