The NBA has changed quite a bit since Larry Bird played for the Celtics. Of course, free agency and the constant player movement is what comes to mind first, but there’s also the matter of the actual gameplay.

After Bird, there was the isolation era. Now the league is all about pick-and-rolls. And the ability to knock down shots from the perimeter has never been more important.

The 3-point line was just being introduced to the NBA when Bird first started in the league, and it was never something he utilized to the extent today’s players do. No one did. As he mentioned on Ordway, Merloni & Fauria as part of Christian Fauria’s “25 for 25K” to benefit the American Diabetes Association, Bird and the Celtics didn’t even guard opponents around the arc.

But if he played today, Bird would adjust just like anyone else — and be happy to do so.

“Obviously, we’d be taking more 3-pointers because that’s where the game's evolving,” Bird said. “You know back in the day, we wouldn’t even guard guys out beyond the 3-point line. And very few guys looked at the basket from 23 to 25 feet. But the game has changed and the game goes through periods where it changes and you just have to adapt to the changes. And that’s what we would’ve done, we would adapt. I can remember back in the day Danny Ainge said we should shoot all 3-pointers every game.

“That’s where the game is now and I like it. I think it opens the floor up. Back when we played, everything was pound and throw it inside and just pound, pound, pound. And we always worried about the court (not being) big enough. Now, it’s spread out, the court is more open and I believe you can show off your talents off a little bit more.

Now, the 4-point line is another story. The BIG3 has instituted it and the idea has been kicked around the NBA, but nothing has come of it quite yet.

Bird wouldn’t be stunned if it became part of the game.

“It’s definitely a major change, but you can remember 10 or 15 years ago, they moved the 3-point line up and, eventually, they got smart about it and moved it back,” he said. “But a 4-point line wouldn’t make much difference. I think the problem with that would be guys shooting a lot of air balls and a lot more fast breaks, but it really doesn’t matter. The league is always looking at ways to speed the game up and score more points. If they did it, I wouldn’t be surprised. But, I like the game where it is now and it’s doing fine.” 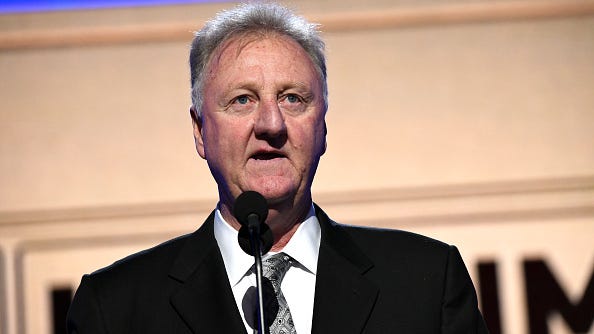 Larry Bird Talks About His One Issue With Player Movement